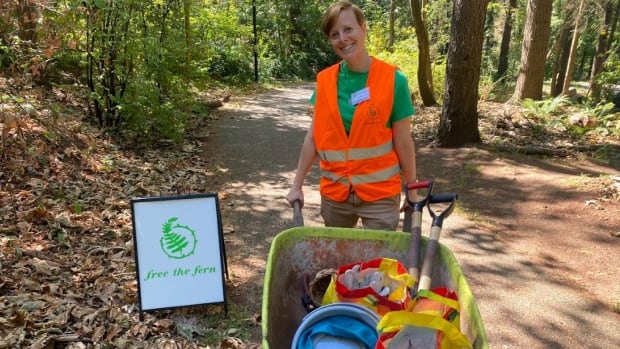 Our planet is changing. So is our journalism. This story is part of Our Changing Planeta CBC News initiative to show and explain the effects of climate change and what is being done about it.

A volunteer group in South Vancouver has come together to protect one of the few remaining native forests in the city by removing invasive species and encouraging the growth of native plants, including fern, salal, red-flowering currant, honeysuckle, bald rose and ocean spray.

Invasive species are plants or animals that are not native to an area, and when introduced, they force out species critical to the survival of an ecosystem.

Grace Nombrado, executive director of Free the Fern, says this affects native plants, but it can also harm insects, animals and people.

The group focuses on the Champlain Heights trail system in South Vancouver, a wooded area that wraps through neighborhoods and is home to some of the oldest trees in the city.

“There are Douglas firs here that can live up to 160 years,” Nombrado said.

Free the Fern has been operating the trail system since January 2021, and in that time, 92 volunteers have removed 40 tons of invasive plants — approximately 469 city green bins worth. They also planted more than 700 native plants, such as Pacific ninebark, orange honeysuckle, twinberry honeysuckle, and lingonberry.

Among the invasive species they fight against is: English ivy, which people often crawl over as it climbs houses and adds an extra layer of greenery to trees. Despite its beauty, Nombrado says it kills native plants.

“It’s spreading and it’s completely engulfing an area,” she said.

“There is no other natural predator to stop the spread of the ivy than humans.”

It spreads across the forest floor and climbs trees, not getting enough sunlight for them to survive. Nombrado said the ivy also adds weight to trees, making them more prone to breaking and falling.

Large shrubs of Himalayan blackberries are found throughout the Lower Mainland and Vancouver Island, but they too are invasive and harmful to plants. In fact, Metro Vancouver says they are one of the most widespread invasive species in the region.

The group’s name, Free the Fern, came from Nombrado who rescued a sword fern from a Himalayan blackberry bush that was engulfing him.

Himalayan blackberry is considered an invasive species by the provincial government, working on: prevent further spread of the species.

Since the project began in Champlain Heights, Nombrado said they have seen the return of the Douglas squirrel, which is native to the forest.

Also, people from all over the Lower Mainland have volunteered to weed, plant, propagate and raise money.

“It’s actually going to be a bit of a revolution,” Nombrado said.

“I want to encourage everyone not to be intimidated by plants and nature.”

7:25THE CLIMATE CHANGE: Volunteers Committed to Free The Fern

Invasive Himalayan blackberries suffocate native species, including ferns and blueberries. A group of volunteers has decided to take action and Free the Fern. As part of our series The Climate Changers, Johanna Wagstaffe of CBC pulled out her gardening gloves and set out to learn more.

Climate change is one of the most pressing problems of our time. In BC we have witnessed its effects with deadly heat waves, devastating floods and rampant wildfires. But there are those who are committed to taking meaningful steps, big and small, toward a better future for our planet. Those people are featured in the CBC series The climate changersproduced by CBC science reporter and meteorologist Johanna Wagstaffe and associate producer Rohit Josephwhich airs on Wednesdays All Points West, At the coast and Radio West on CBC Radio One and on CBC Vancouver News with features on cbc.ca/bc.