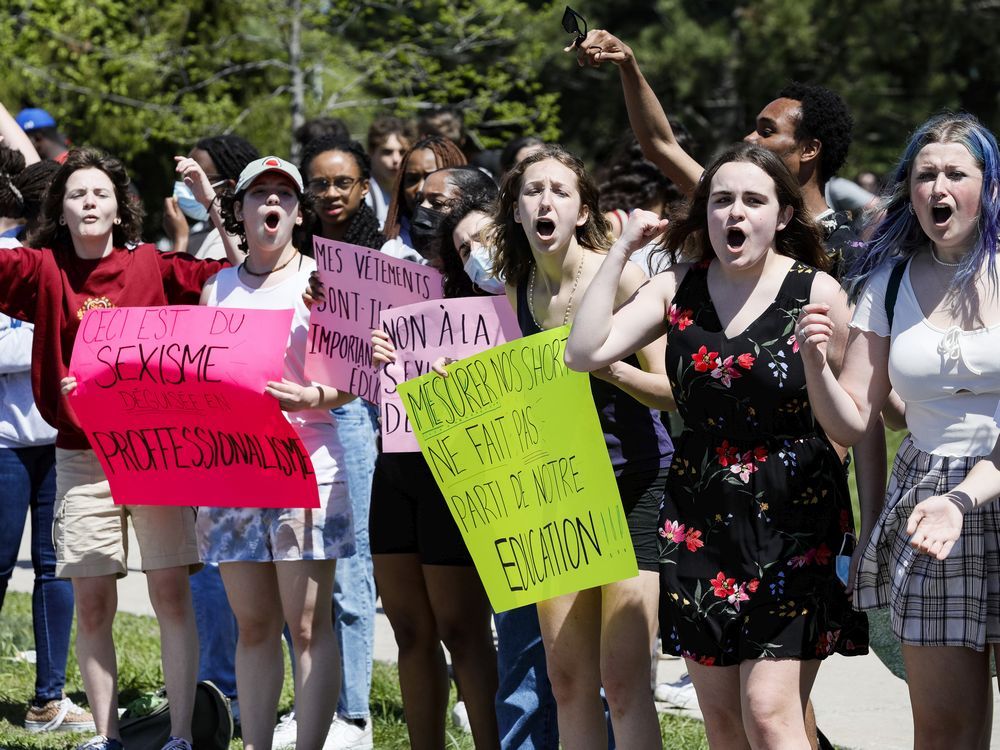 The dress code crackdown on the administrators of a French Catholic secondary school in Orleans on Thursday “is unacceptable,” said the education director, who apologized for the clothing blitz that singled out several girls.

Marc Bertrand made a public statement on Saturday, a day after hundreds of students protested outside Béatrice-Desloges secondary school, condemning the inspections.

“All students should absolutely be treated with dignity and respect,” Bertrand said in the statement. “No student should undergo such a check of his clothes, much less be challenged in front of his peers. Unfortunately, the strategy adopted by the school last Thursday does not reflect these values ​​that are very dear to the CECCE (Conseil des écoles catholiques du Centre-Est).”

Bertrand corroborated much of what students reported: the staff took students, mostly girls, into the hallway to check the length of their shorts. Some students were asked to bend their knees to check that their shorts met the school’s dress code, which says the shorts and skirts should fall to at least mid-thigh.

No student was told to bend over and no shorts measurements were taken with a ruler, Bertrand’s statement said.

Protesting students said they were embarrassed when they entered the hall for a clothing inspection.

There was another layer of controversy when the Ottawa police showed up. Officers arrested a boy, who they said did not attend school, for trespassing and he was later released without charge.

According to Bertrand, the police attended the public safety protest.

“Many of the students dispersed to the adjacent street where vehicles were driving around the point where traffic was stopped,” Bertrand said. “The police then came to the scene to ensure the safety of the students.”

A small group of students who do not attend a school in the French Catholic administration showed up at the protest, Bertrand said. Police intervened when they refused to cooperate, he said.

Not a single Béatrice-Desloges student has been charged, Bertrand said.

According to Bertrand, the students “returned to the school quietly” after education inspector Jason Dupuis addressed them at 12:45 pm.

Dupuis will be back at school on Monday when students want to share their concerns.

“The administration of the Conseil des écoles catholiques du Centre-Est sincerely regrets this result and apologizes to the students and families disturbed by these events,” Bertrand said in his statement. “Follow-ups are underway with all CECCE schools to ensure such a situation does not happen again.”

Group 12 student Sophie Labbée said on Saturday that she is grateful that the school board admitted that what happened on Thursday was wrong.

“I think we all appreciate the apology because I think this is the first time the school board has admitted they did something wrong and it’s not an answer that protects themselves rather than students,” Labbée said. “I think we need to find out and see how legit it is, but it’s definitely a step in the right direction.”

Danika Verdon, a grade 11 student, said she was somewhat surprised to see an apology from the school board. Students still want to see consequences for teachers involved in the dress code, Verdon said.

The crackdown on the dress code sparked disdain from local politicians, who addressed it on social media.

Hard to see how the Ottawa Police Department statement holds that these “young people” are “intruding” on the sidewalk when they just wanted to cross the street and join the protest pic.twitter.com/QUKSZPZViN

Stephen Blais, the incumbent Liberal candidate for Orleans in the Ontario election, said: “Women should never be judged by what they wear.”

The French Catholic school administrator for the zone, Dan Boudria, said: “Our students must be treated with dignity and respect. A situation like this must never happen again.”

Asked about the controversy at school during his stop at the Tulip Festival on Saturday, Mayor Jim Watson said it was “deeply distressing” for the students and their families.

“I don’t have all the facts and I’m not sure (of) a call for the police presence, but that’s the school board and police call to do,” Watson said.

“My hope is that they come to an amicable solution so that it doesn’t ruin and ruin the good relationship that teachers and students should have with each other.”