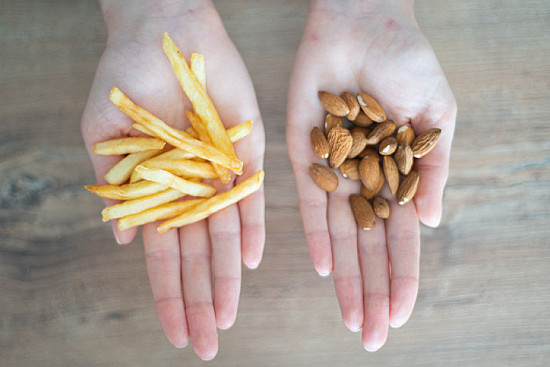 In a perfect world, a daily serving of chips instead of almonds would be an easy choice, and choosing the salty, fried option would have no negative consequences.

But a Harvard expert says we should take the findings of a new study supporting this scenario with a grain of salt. This potato industry-funded study suggests there is no significant difference between eating a 300-calorie serving of French fries and a 300-calorie serving of almonds for a month, in terms of weight gain or other markers of diabetes risk.

Maybe snacking on fried potato strips instead of protein-rich almonds won’t shift the scale in the short term, but that doesn’t make the decision equally sound, says Dr. Walter Willett, a professor of epidemiology and nutrition at the Harvard TH Chan School of Public Health. Crunchy, satisfying almonds provide health benefits, including lowering “bad” LDL cholesterol. In the long run, they are a much better option for warding off chronic diseases – including diabetes – or delaying their complications.

“We’ve learned from many studies over the past two decades that weight loss studies that last less than a year are likely to yield misleading results, so a study that lasts just 30 days is less than useless,” says Dr. Willett. “For example, studies lasting six months or less show that low-fat diets reduce body weight, but studies lasting a year or more show the opposite.”

What health-related factors did the study measure?

The research is published in the American Journal of Clinical Nutrition† The researchers randomly split a group of 165 adults (mean age 30; 68% women) into three groups for 30 days and instructed them to eat a 300-calorie serving of one of the following daily:

Researchers provided the participants with 30 one-day servings of their food, told them to include it in their daily diet, but offered no additional instructions to change diet or activity level to offset the 300-calorie intake.

At both the beginning and end of the month, participants’ body fat was measured, along with total weight, blood sugar, insulin and hemoglobin A1C (a long-term reflection of blood sugar). Five participants from each group also underwent post-meal testing to evaluate short-term blood sugar responses.

Weight isn’t the only thing that counts for health

After 30 days, changes in body fat and total body weight were similar in the French fries and almond groups. For example, glucose and insulin levels were measured through post-fasting blood tests.

However, one key difference emerged: Participants in the French fries subgroup had higher blood glucose and insulin levels right after eating their fries compared to the almond eaters.

It’s tempting to conclude that there isn’t much of a difference between fries and almonds — it’s the calories that count. But a closer reading reinforces the idea that two items generally placed on opposite sides of the healthy diet spectrum are still further apart than research findings lead us to believe.

“The only clear finding was that the consumption of French fries increased blood glucose and insulin secretion much more than almonds,” says Dr. Willett. “This is consistent with long-term studies showing that potato consumption is associated with an increased risk of type 2 diabetes, especially when compared to whole grains.”