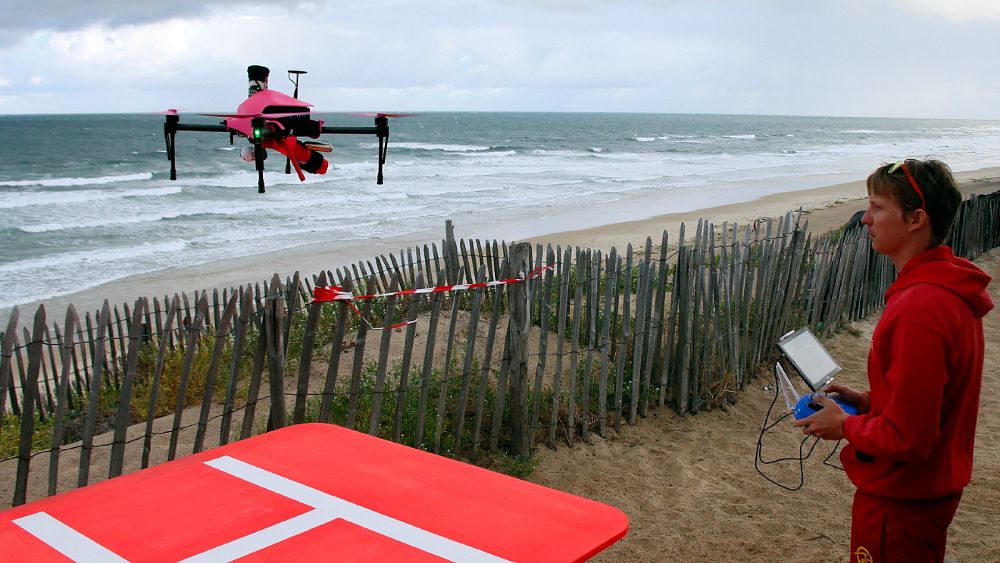 A boy struggles in the sea. Waves wash over his head again and again, as he bobs in the water.

But suddenly a bright yellow life jacket falls next to him, seemingly out of nowhere. He manages to grab it, clinging to it until the lifeguards arrive and take him to safety.

Images of this incident, which happened earlier this month off the coast of Sagunto in Valencia, Spain, is doing the rounds online. And that yellow life jacket? That was the work of a rescue drone, deployed from the shore to help the boy gain some time before first responders arrived.

It is a particularly dramatic example of how technology is increasingly being used to protect swimmers and members of the public.

When you’re stretched out on the beach or reclined by the pool, an accident is probably the last thing on your mind. But drowning is a leading cause of accidental death, causing thousands of deaths every year in Europe alone.

And from rescue drones to artificial intelligence (AI) systems that can detect when someone is drowning, there is a whole host of technology aimed at making swimming pools and beaches safer.

Drones to the rescue

The drone that helped save the boy in Sagunto is the work of General Drones, a Spanish start-up.

CEO Adrian Plazas told the country that he and his co-founder Enrique Fernández were both former lifeguards motivated to create General Drones after seeing a woman drown in front of them.

Their main goal was to build a drone that can withstand humidity, salinity, high temperatures, rain, high winds and exposure to sand.

The resulting Auxdron lifeguard drone was designed for “the worst conditions on the beach”. In addition to quickly deploying life jackets to swimmers in distress, it can also monitor, detect risks and search for victims.

Of course, drowning isn’t the only threat swimmers face, especially if you’re swimming Down Under.

SharkSpotter is a system that combines AI and drone technology to identify sharks near drowning swimmers and then send an alert to lifeguards.

It will also issue an overhead warning to those in the water when a shark or potential hazard is detected, using a built-in megaphone attached to the drone.

It detects and sorts objects into different categories, distinguishing between sharks and other marine life such as dolphins, rays and whales. It is also able to distinguish surfers, swimmers, boats, people and other objects.

The project is a collaboration between the University of Technology Sydney and The Ripper Corporation.

With the advent of live streaming and artificial intelligence, swimmers no longer have to rely solely on traditional lifeguards to keep an eye on them.

SightBit is an Israeli company that markets its AI program as an “AI lifeguard”, capable of improving standard turnkey cameras with software based on deep learning and computer vision technology.

The company’s AI-powered system scans images collected from surveillance cameras to detect incidents, analyzes how life-threatening they could be, and then sounds the alarm.

It can detect people, objects, sea conditions, ships and animals, the company said.

SightBit’s chief executive Netanel Eliav told AFP that he developed the technology after identifying a shortcoming in the way closed-circuit imagery was used to increase safety in the water.

The program has been in operation for more than a year in the Israeli city of Ashdod on the Mediterranean coast, AFP reports. It chose to deploy SightBit technology in an area away from the nearest lifeguard.

An airbag that you can wear on your wrist

And finally, if you’re concerned about potential accidents while you’re alone at sea or in the pool – why not bring your own inflatable device?

called the “smallest inflatable device in the worldKingii is a bracelet-like gadget that you wear on your wrist.

If you get into trouble in the water, pull the lever on your device. This activates the CO2 cartridge inside and sets up a small inflatable balloon in less than two seconds, lifting you to the surface.

Kingii says it is reusable over 50 times. Users only need to repack the balloon and replace the CO2 cartridge.