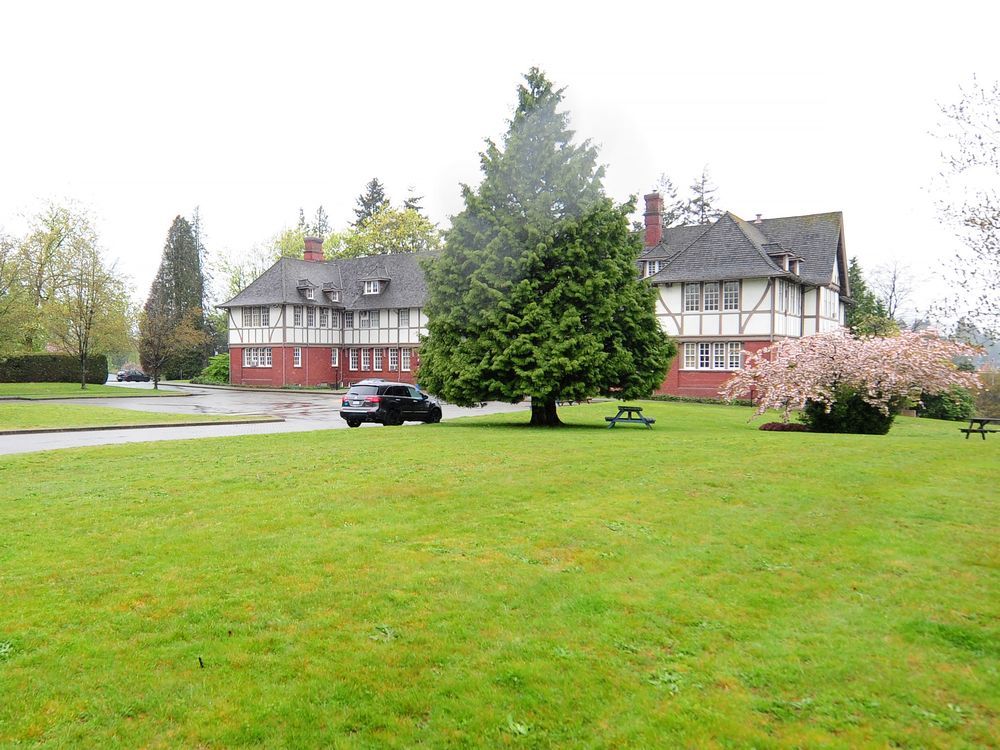 The proposal is for more than 2,600 homes, along with commercial and cultural spaces, in towers as high as 28 floors. It would total 2.5 million square feet of floor space.

The rezoning application, the culmination of six years of planning, is due to go to public hearing on May 24, followed by a council decision.

The project’s proponents call it a powerful example of “economic reconciliation.”

But the proposal is not without controversy. The repurposing application asks the council to approve the removal of a century-old Tudor-style building at 4949 Heather St., listed in the “A” category of the Vancouver Heritage Register. It is a step rarely taken for Grade A listed buildings, which are recognized as having the highest architectural and cultural value.

The repurposing would be a mixed-use development with retail, services, childcare, parks, 540 social housing units, 400 market rental homes with approximately 25 percent of the floor space at below-market rents, and 1,670 leasehold apartments.

The Heather Street building was a private boys’ school that opened in 1914. It was handed over to the RCMP in 1920, who used it as a regional headquarters and training academy. In 2012, the RCMP moved to a new headquarters in Surrey.

The property ended up with the Canada Lands Co. in 2014. MST has partnered with Canada Lands and is a co-owner.

The joint venture does not aim to demolish the historic building, also known as the Fairmont Building. But the First Nations want it moved.

“The Fairmont Building is a constant reminder of the RCMP’s role in enforcing Indian law and other discriminatory laws,” a report to the municipality said. “The required preservation of the building is seen by the MST Nations as an imposition of colonial values.”

While the building could be relocated and refurbished for about $47 million, city officials have been unable to locate a suitable site for it. So the staff is asking the board to approve its removal and, according to the report, that approval will lead to review of any future demolition permit.

“In asking the nations to preserve that symbol of colonialism, the City of Vancouver rightly acknowledged that this was an unfair request,” said Brennan Cook, MST Development Corporation’s vice president of acquisitions and development.

Robert Lemon, Vancouver’s senior heritage planner from 1991 to 1996, said he was “deeply disappointed” to learn that the building may not remain on the site — or survive at all.

“To have the building removed, either by demolition or by moving it to another location…that would be unprecedented,” Lemon said. “It would be a precedent-setting movement.”

Lemon said he hopes the council will back down against the removal of the Fairmont building, which he called an “excellent example of Tudor revival architecture.”

Lemon said he hopes “the three First Nations would reconsider the decision to remove the building so that it could continue as a legacy, to tell the story in physical form of how the RCMP helped the First Nations in British Columbia treated.”

Lemon pointed to the 96-year-old Hudson’s Bay building in Winnipeg, which was handed over to the Southern Chiefs’ Organization last month for an Indigenous-led development project. Lemon has also prepared a feasibility study for Tk’emlúps at Secwépemc First Nation for the Kamloops Indian Residential School building. After the discovery of hundreds of unmarked graves there, he said, the nation’s leadership decided to preserve it as “a testament to the horrors that took place there.”

On that suggestion, Cook said, “The MST nations were clear… it was too painful a symbol to keep on their land.”

“It’s an interesting position to talk about heritage when you talk to the people who have owned the land for thousands of years,” Cook said. “What they see as heritage is not a 100-year-old building.”

Ginger Gosnell-Myers agrees it would be important to remove a Grade A heritage building.

Gosnell-Myers was an Indigenous planner for the city of Vancouver and authored the reconciliation framework the council passed in 2014. “It is a policy tool that allows decisions and policies to be reversed if they fail to meet the city’s goals of promoting reconciliation.

“In the past, heritage policy was the holy grail. You don’t touch it, it’s sacred.”

This decision, she said, will be a test of “the city’s commitment to change.”

Sign up to receive daily front page news from The Province, a division of Postmedia Network Inc.

The next issue of The Province Headline News will be in your inbox soon.