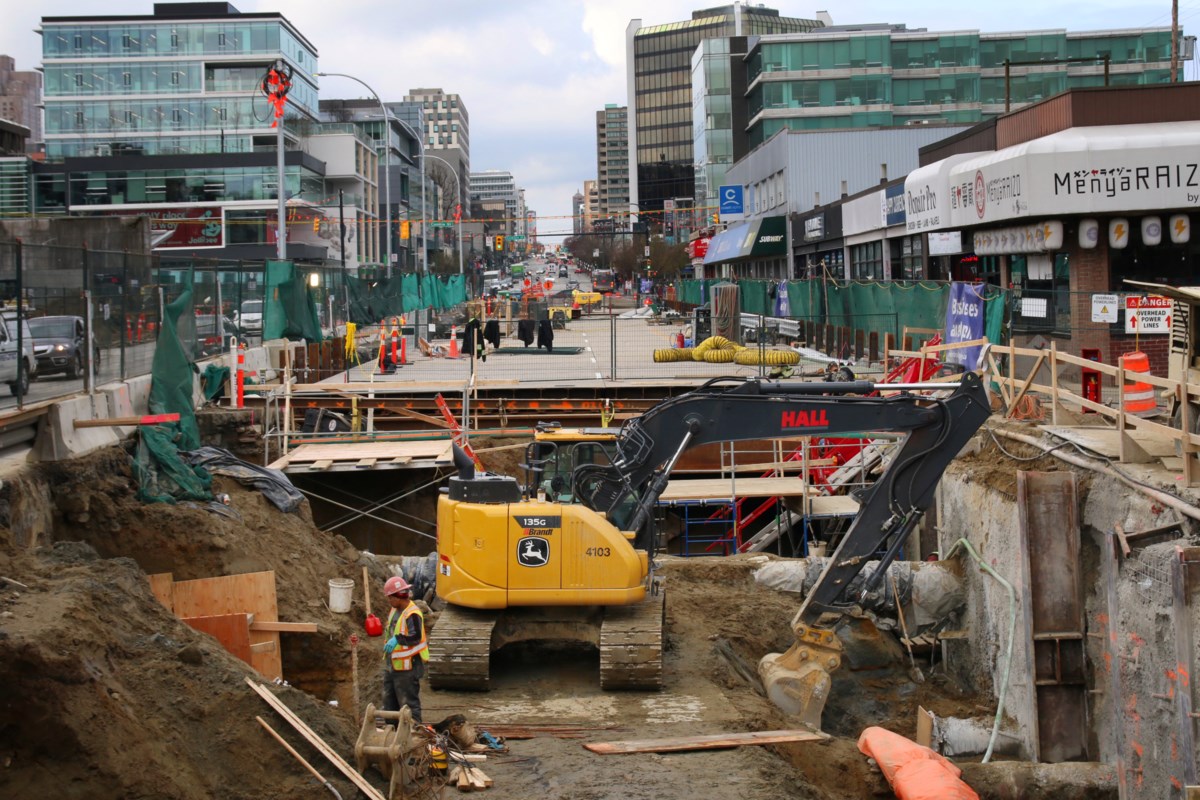 The Vancouver City Council approved the Broadway plan on Wednesday after several lengthy public meetings over the past two months that ended with the mayor and councilors adding 27 amendments to a 493-page document outlining a 30-year vision for the corridor. .

The complex plan makes it possible to build towers of 30 to 40 floors around metro stations, with six floors and 12 to 18 floors in other parts of the corridor, while at the same time protecting monumental buildings and creating more greenery and public squares.

Two-thirds of the plan calls for rental housing.

In his closing remarks, Mayor Kennedy Stewart said the plan complements the investment by the state and federal governments to build the Broadway subway, which is currently under construction and expected to open in 2025.

“This is a great plan, as it stands,” Stewart said, stressing that the increase in density in the plan area will be of a mixed type with some of the best protections for tenants in the country.

“So no luxury apartments across the board, but really building entire communities that people really want to live in and can live in.”

The plan aims to add 30,000 new homes over the next 30 years and prioritize market and below-market rental properties and social housing near transit nodes and corridors. The goal is to improve access to jobs, school and community amenities for low- and middle-income renters.

Some changes to the plan include:

• Construction of a protected cycle path along Broadway.

• Allow more towers on a building block than originally specified in the plan.

• Consult with the countries of Musqueam, Squamish and Tsleil-Waututh and incorporate values, history and art into the public space.

• Work with the school board and provincial government to prioritize new schools and school expansion in anticipation of population growth in the corridor.

The council approved the plan, despite pressure from the municipality. Colleen Hardwick — supported by councilors Melissa De Genova and Michael Wiebe — to refer it back to the workforce and submit an updated version to the council elected after the October 15 election.

Hardwick, who is Team for a Livable Vancouver’s mayoral candidate, quoted the late citizen guru Jane Jacobs in her closing remarks from her epic 1961 book, The Death and Life of Great American Cities.

Hardwick said Jacobs wrote that cities had the ability to provide something for everyone just because and only if they were created by everyone — which Hardwick says didn’t happen with the Broadway Plan process.

“Finally, the Broadway plan would see thousands of tenants ‘moved’ into affordable rent-controlled housing, dramatically increase both rents and housing prices, be a huge gift to land speculators, improve the livability and cherished neighborhoods of Vancouver. seriously harm and violate the principles of the greenest city,” she said.

count. Jean Swanson said she could not support the plan because it failed to take into account the city’s most vulnerable, or those on low incomes. Swanson said she also feared that small businesses would be lost to gentrification.

“My vote no can be interpreted as a plea for all governments to come together and make housing affordability a real priority, including the city with zoning plans, the county with money and vacancy control, and increases to SAFER [grants] and social assistance – and the FBI with vastly more money for housing,” she said.

count. Pete Fry described the plan as “a big game-changer for our city,” saying voting against was not an option, echoing the mayor’s point that it would be connected to a subway that was already under construction.

“What we’ve come to with all the changes is some pretty strong regulation to protect tenants, a whole new level of rent stabilization and opportunities for tenant relocation and introducing things that haven’t been seen before.”

Some of the tenant protections mean tenants who have been evicted from a home can return to a new rental unit at a 20 percent discount off the average market rent in the entire city or at the tenant’s current rent, whichever is less.

count. Rebecca Bligh said the Broadway corridor has long been “ripe for renewal.”

“Because we can have a plan with two-thirds rental housing, with several layers of apartments to pay for the growth in terms of public amenities and parks, I think we struck the right balance with this plan,” Bligh said, noting it was a 30-year-old. year plan and that not every element will be implemented overnight.

“I will be 74 by the time this plan is realized just for perspective.”

The Council’s decision came after 156 citizens spoke to the Council over several days, with differing views ranging from support – particularly from tenants – to concerns about an increase in high-rise buildings, loss of older rental properties and possible evictions.

The mayor and city council also received dozens of emails from residents about the plan, which covers an area about 500 blocks from Clark Drive in the east to Vine Street in the west.

As the mayor mentioned in his comments, the main driver for the Broadway plan is the construction of a subway from Clark Drive to Arbutus, with Stewart and others aiming to extend it to the University of BC.

Neighborhoods primarily affected by the plan include Kitsilano, Fairview, Mount Pleasant and the southern portion of False Creek Flats, which was home to an estimated 78,000 people when the 2016 census was released.

Jade Buchanan, a father of a toddler in Kits Point, told the city that he supported the plan because of its goal to create more homes for families and renters and provide more childcare places.

“They facilitate transit and active transport,” he said. “Active transport and transit are child-friendly, they are safer for our children and they are good for our health. And cities are also important sources of innovation.”

Amanda Collinge, a resident of Fairview Slopes, said she opposed the plan because of potential changes to her neighborhood that would obscure the view.

“Our wealth is tied up in our home, and if these opinions are taken away, our wealth will be effectively diminished,” she said.

“Not only will it destroy everything in our eyes and in the eyes of our neighbors, but we will also live in eternal shadow. As we are in a historic home and in five unit tiers we cannot add windows due to the heritage aspect. So we will live in darkness, if towers are built around us.”

The plan will come into effect on September 1. At that point, city officials are expected to post a final document on the city’s website for the public to view.