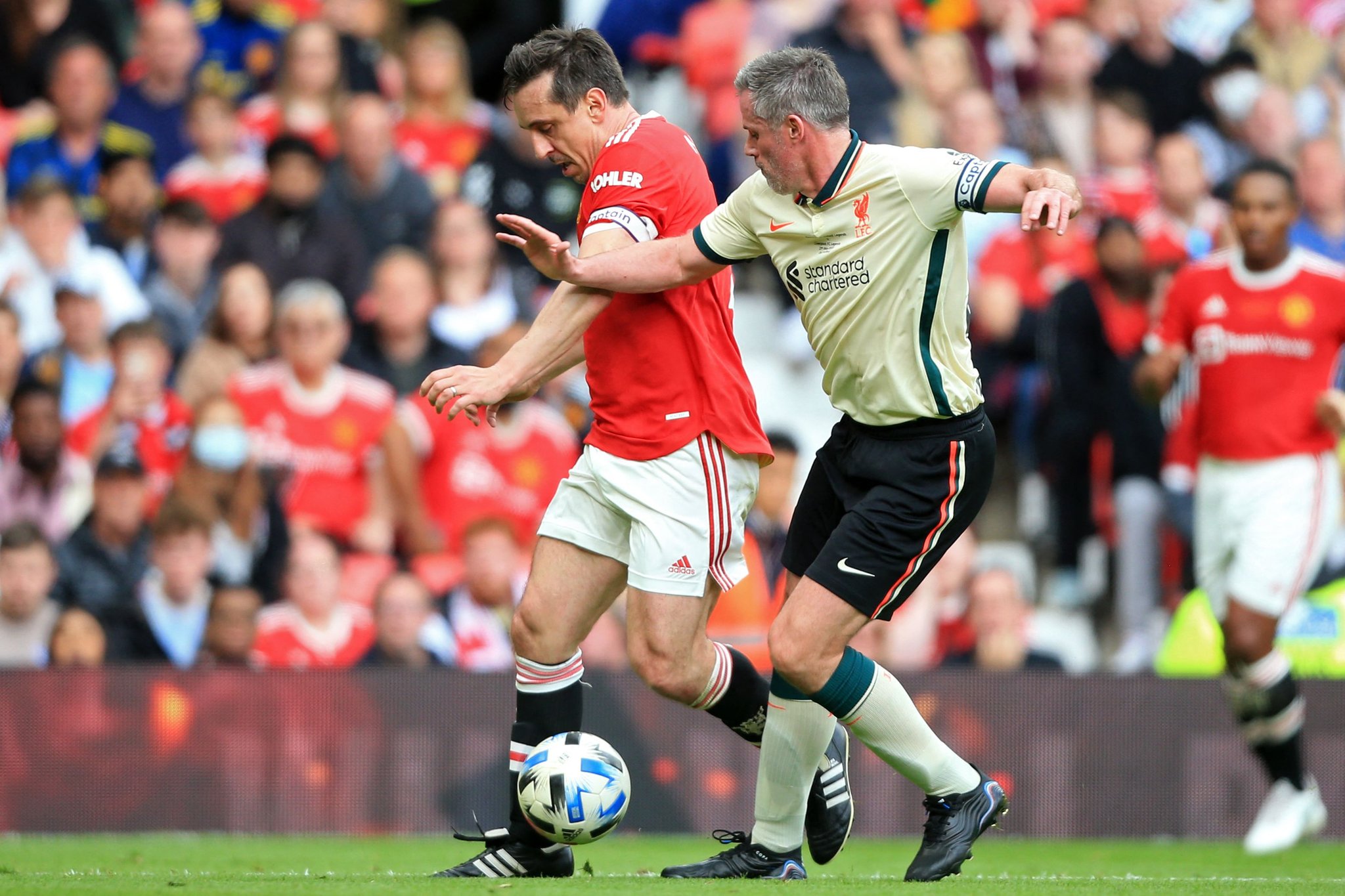 The ex-Liverpool defender was in a jovial mood after his side defeated Manchester United in a friendly for charity.

Goals from Luis Garcia and Mark Gonzalez (2) defeated the Red Devils in the charity game, with Dimitar Berbatov taking care of the hosts from the spot.

Signing up to our ManchesterWorld Today newsletter

The match raised more than £1.3 million for the Manchester United Foundation, with 48,777 in attendance at Old Trafford ahead of a return leg at Anfield between the teams in September.

Neville and Carragher captained both teams on Saturday and, unsurprisingly given that they mainly operated on the opposing side, they rarely interacted throughout the game.

However, one incident when their paths crossed occurred in the first half as Neville advanced down the right flank into the Liverpool penalty area, before slipping just as Carragher closed it.

“He’s bottled it,” the former Liverpool centre-back told ManchesterWorld with a chuckle. “I think he saw who was coming and thought ‘I don’t want that’.

Sky Sports colleagues swapped the studio for the pitch to raise money for the Manchester United Foundation. Credit: Getty.

‘I think he slipped, didn’t he? He went up and down that line, but the legs don’t move as fast as they used to.”

As the game progressed, Neville pushed higher up the field instead of holding onto his usual defensive position.

“He confused himself,” Carragher joked. “In fact, then they lost all hope and faith and started playing like children as if it were in the school yard. He didn’t have to run back then either – he has a big problem running back at the moment.”

An enjoyable afternoon for Liverpool

It was a rare win at Old Trafford for Carragher this weekend, with the 44-year-old being one of the few to play the full 90 minutes.

The scouser is also looking forward to playing with United again in a few months, this time at Merseyside.

“It was delicious,” replied Carragher, when asked what it felt like to beat the Red Devils. “I felt worse before the game when I saw their team, but we got some new players playing for the legends team for the first time, so it was a good performance.

“It’s good to play,” he added. “They’re not as serious as normal games, but you don’t want to embarrass yourself, you want to play with your friends and show that you still have it.

“It’s nice to come out on top and we’ll have a return leg at Anfield in the future – we’ve claimed the first leg and we’re still claiming goals – they still count in legends’ football!”