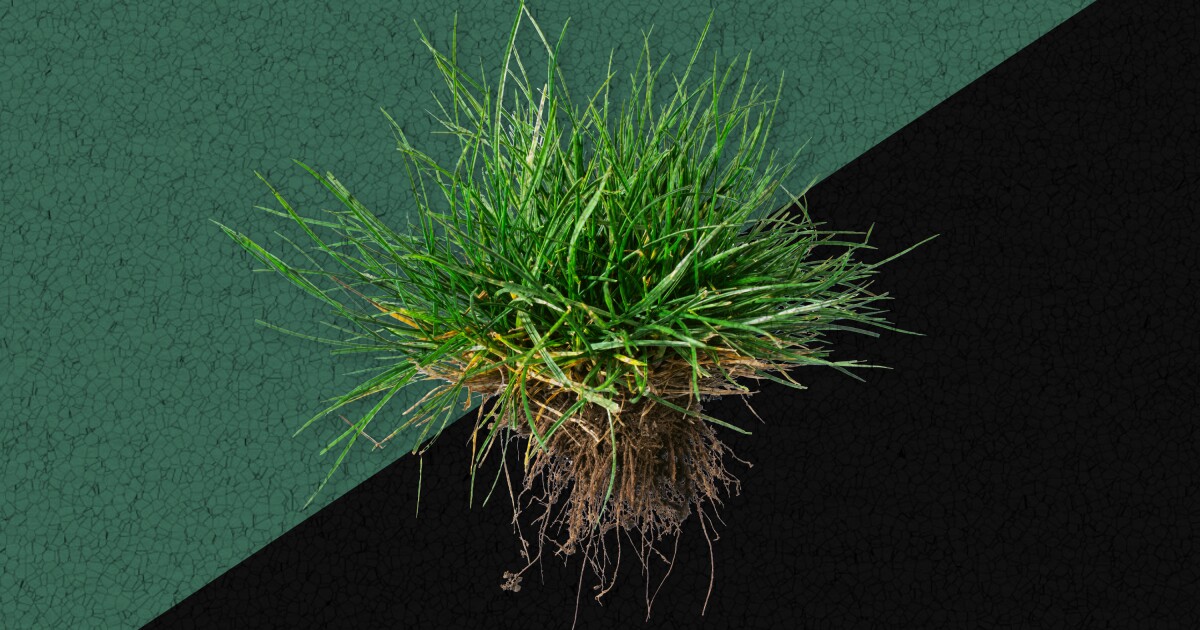 It’s going to be a summer of brown grass and tough choices for Southern California lawn owners who will face the Metropolitan Water District’s one-day-a-week watering restrictions beginning June 1.

You can’t keep a lawn green with just eight minutes of water once a week, the recommended amount people should use with traditional sprinklers. Period.

“Most lawns will go dormant, and depending on the grass, some will be a total loss,” said Jim Baird, a turf specialist at UC Riverside’s Turfgrass Research Facility.

The favorite Southern California variety, fescue, is used to being watered several times a week. The water-thirsty fescue will struggle to stay alive in communities facing water restrictions, including about 6 million people in Los Angeles, Ventura and San Bernardino counties. And that’s fine with people believing that ornamental or “non-functional” lawns are a colossal waste of precious resources in Southern California.

“If you play football on it or use it for family picnics, fine,” says Evan Meyer, director of the Theodore Payne Foundation, which grows, sells, and preserves California native plants. “But if your lawn is just ornamental, it’s indefensible given the reality of our water situation here.”

Rebecca Kimitch, a spokesman for the Metropolitan Water District, said it more bluntly: “‘As we always say, ‘If you’re only sitting on your grass mowing it, get rid of it.'”

For the past ten years, Baird has been trying to educate government officials and lawn owners about the most water-efficient ways to grow traditional lawns in this region. He proposes:

However, to his frustration, that’s not what people do. “Most people don’t even know how their automatic sprinkler systems work,” Baird said. “They just ask their gardeners…for the… [sprinkler] bells so the grass stays green, and the gardeners set the bells over water so they don’t lose their jobs. I see people’s irrigation running every night and it’s so sad because now the lawns will suffer because people waste water and faulty irrigation systems waste water. It is not the grass that wastes water.”

The strict watering rules apply only to the MWD’s customers who rely on water from the severely depleted state water project, which historically averages about 3 million acre feet of water over a three-year period, but has collected only 600,000 acre. feet of water in the past three years, Kimitch said.

MWD also collects water from the Colorado River Aqueduct, as well as local sources such as groundwater supplies and recycled water, but customers in the crisis zone can’t get that water because their pipes are only connected to supplies from the State Water Project. It’s actually a distribution problem that affects about a third of MWD’s Southern California customers, Kimitch said. Meanwhile, other communities have more water available — at least for now — so you can see a patchwork of verdant lawns around LA as you consider ripping yours out.

Which is not to say that other Californians can simply water with abandon. The ongoing megadrought, now entering its third year, affects the entire state, and every consumer needs to cut water use by 20%, Kimitch said.

“You may not be experiencing an acute crisis now, but you could be in four or five years,” she said. “When the crisis hits, instead of watching your lawn die, you can watch your beautiful, native California garden bloom.”

So now it’s time for afflicted lawn owners (and even the unaffected whose time with their grass can be short) to consider how to move forward when June 1 rolls around. Will you try to keep your lawn alive by dewatering it over the next few weeks or will you stop watering altogether and start planning what to plant there?

You can get money to let your lawn die, if you have a plan

The Metropolitan Water District’s Turf Replacement Program pays $2 per square foot for up to 5,000 square feet of lawn converted for approved “waterwise” use in residential front or back yards (or up to 50,000 square feet of commercial landscaping), and some local agencies offer an additional discount on top of that, which can mean a bigger payout once your work is completed and approved.

In recognition of the water crisis, MWD has extended the deadline to remove lawns and install new aquatic plants, Kimitch said. In the past, such programs typically required work to be completed within 90 days, but the deadline has been extended to six months for people who have already applied to clear their lawns and to a year for new applicants.

Get paid to tear out your lawn

That means people can let their lawns die this summer, she said, and then start planting in the fall or winter, when cooler temperatures and (fingers crossed) seasonal rains make it easier for plants to establish themselves in their new environments.

These grasses are “really, really drought tolerant,” Becker said, and need little mowing, maybe two or three times a year, if people want to create a pasture in their yard.

Becker also recommends other native plants as lawn substitutes, such as:

These grasses grow 6 to 12 inches tall and cannot be mowed frequently to rejuvenate them, he said. But frequent mowing means they need more water to fuel their regrowth, he said.

Traditional overhead watering is also not allowed, so your new plantings should be watered by hand or drip irrigation. That’s one of the reasons replacing a fescue lawn with a more drought-tolerant turf like Bermuda doesn’t qualify for the discount, said Krista Guerrero, a water efficiency specialist for the Metropolitan Water District. It’s also hard for inspectors to tell the difference between water-thirsty turf and their more drought-tolerant cousins, she said.

Baird, the turf specialist, thinks that’s unfair. Many golf courses and commercial turf users have switched to Bermuda and other grasses grown to be more drought tolerant, and he believes homeowners should be rewarded with discounts for doing the same. But Guerrero said the discounts are intended to encourage more water-efficient landscapes, and “even low-water sods still use more water than other types of drought-tolerant plants.”

Consider a compromise. Mark out a green area for children and pets to play, then remove the rest of the grass to create planting areas for vegetables, fruit trees and drought-tolerant plants. (There are ways to efficiently water vegetables and trees during a drought.)

Native elderberries grow quickly and provide shade as well as food and shelter for birds and other creatures. A garden with drought-tolerant herbs, such as rosemary, oregano, marjoram, and sage, will add color and fragrance to a sunny area of ​​the yard, as will lavender shrubs and native plants such as Cleveland sage, matilija poppies, California buckwheat, and hummingbird sage.

Help the trees in your yard by removing at least four feet of grass from around their trunks. This will allow you to create a reservoir around the tree for deep water once a week — running a hose on low for about 20 minutes — and provide a space to place a finely screened bark mulch to hold water. Just be sure to keep the mulch a good four inches from the tree trunk to reduce the risk of rot.

If you’re trying to maintain your lawn, be prepared for a bleak summer

Baird believes every lawn owner should reduce water use because of the drought, whether or not they live in areas with water restrictions. He usually stops watering his Bermuda lawn between November and March (usually the rainy season in California), then slowly starts one day a week and up to three days a week during the hottest months between July and September.

He’s been “short of water” for just 16 minutes a week this spring, as temperatures have been quite cool, “and my lawn looks pretty rough,” he said. He couldn’t think of a grass that looks like you’re used to with just eight minutes of watering a week. “It may not kill everything, but it will look like it was killed.”

With that in mind, here are his tips for trying to keep your lawn at least somewhat alive under MWD’s water restrictions: