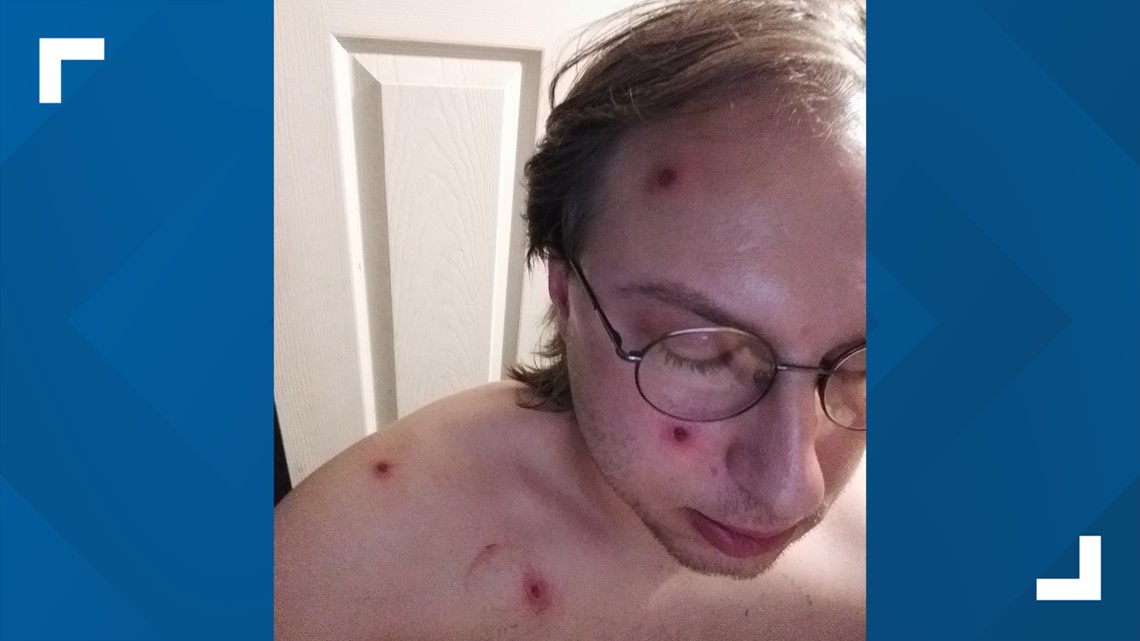 The CDC reports that there were 5,189 confirmed cases of monkeypox nationwide as of July 29. At least 49 Hoosiers have been diagnosed.

INDIANAPOLIS — Cases of monkey pox continue to rise across the country and here in Indiana.

The CDC reports there were 5,189 confirmed cases nationwide as of July 29.

Among them is James Ferguson from Indianapolis. He is in quarantine and has been isolated in his home for four weeks.

Ferguson describes the illness as extremely painful and said his experience of being tested, diagnosed and treated at the end of June was daunting.

Ferguson is one of 49 Hoosiers diagnosed with the virus since June 18.

The outbreak mainly affects men, especially men who have sex with men, but anyone can get the monkeypox virus. Women and children have also had positive cases. It is spread through close physical contact.

Ferguson’s symptoms were mild at first. The sores on his skin were small.

“I found myself just not feeling myself, and actually it started off more like a mental fog and fatigue. Then I thought I was bitten by fleas or insects or something. I mean it’s Indiana, I think oh mosquitoes or something” Ferguson said. “And I thought, ‘Oh, this is a bit like chickenpox.’ And as soon as I said that, I had the aha moment and thought, ‘Oh no.'”

RELATED: Yes, monkey pox can spread by trying on clothes or changing sheets

The lesions multiplied. After that, headache and fatigue led to fever and pain.

“So there are three on my face,” Ferguson noted. “And I’ve got them on my scalp, back, chest, some on my arms. I mean, they’re kind of all over the place. And… they hurt,” Ferguson said. “I started having a 103 degree fever that I couldn’t break with Tylenol or ibuprofen for five days. During that time, many of the days, I just had terrible body aches.”

The 32-year-old Christian counselor from Indianapolis also faced hurdles in testing and treatment. He said it took three ER visits to get a diagnosis.

“Had I been tested the first time and it came back positive, it would have drastically changed the way this could have been treated and I wouldn’t have the symptoms I have now,” Ferguson said.

He is right. Early detection can lead to better results.

Madison Weintraut, assistant administrator of infectious diseases at the Marion County Health Department, said monkeypox has been a learning curve for doctors and health care providers.

A lot has changed, including since Ferguson was tested at the end of June.

“I can say that we have seen extreme improvements in the past month,” she said.

Weintraut recommends calling your primary care physician or the health department as soon as you notice any symptoms or a new rash.

RELATED: When Should You Get Tested for Monkey Pox?

In positive cases, close contacts can receive vaccines to stop the spread and even prevent the person from getting sick.

That happened to Ferguson.

“When they got the confirmation test, they were very good at providing the vaccine to everyone I had come in contact with,” he said.

Now recovering, he wants to help others stay healthy and encourages people to advocate for their own care.

“That’s hopeful for others who might get this is that there’s a treatment,” Ferguson said. “Definitely go to your provider. Insist that they treat you. If you don’t feel well, you have a rash, have them test you. And if it comes back negative and you still feel bad, have them retest you because it can take several times to get a diagnosis.”

The plan is to eventually also give it to high-risk groups as a form of prevention.

In fact, the Marion County Health Department says that people interested in receiving a vaccine as soon as it becomes available can sign up for notification here, under “Where Can I Go to Get a Vaccine?”