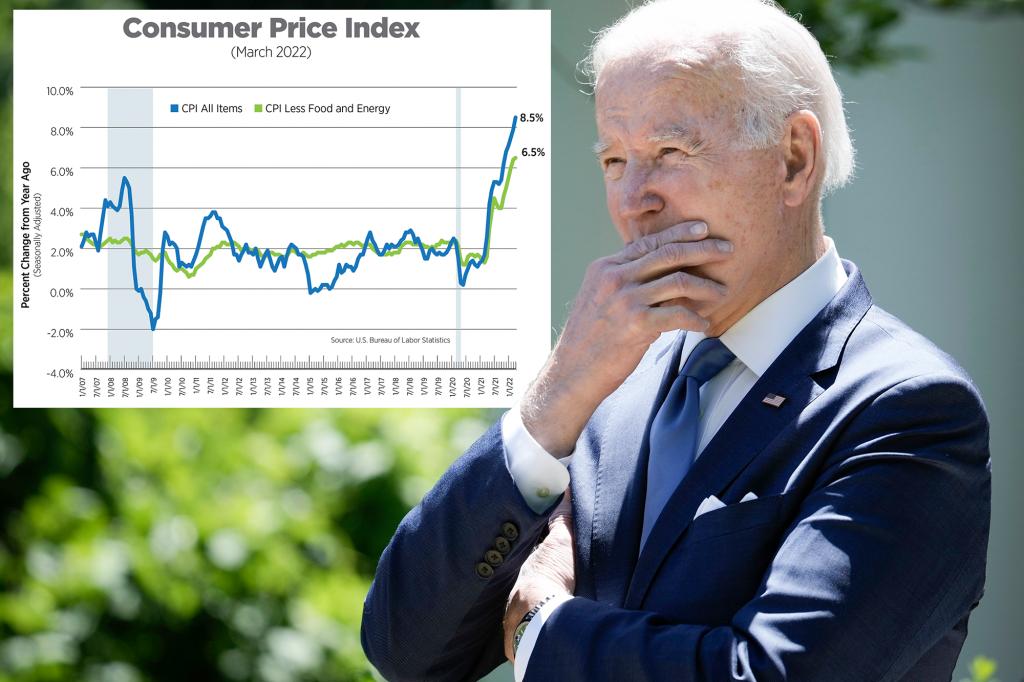 Our ever-worsening inflation problem is a perfect illustration of the Biden administration’s uncanny ability to get everything wrong everywhere at once.

The Biden administration’s first response to any problem is to pretend it isn’t a problem. Inflation went from a minor problem to a major problem. Biden and Congressional Democrats were unwilling to take the necessary steps to curb inflation early — pushing the Fed to raise interest rates and slow the flow of money out of the Treasury doors — initially insisted that inflation was no real problem: “Transient,” they called it.

And then inflation turned out not to be transient, they thought they could just pin it on the Russians. Jen Psaki smugly sniffed the “Putin price hike,” as if Americans were too stupid to understand that domestic inflation had started long before the Russian invasion of Ukraine. That gamble also fell.

If you don’t have fresh ideas or real principles — and when your long-term goals are limited by the fact that the president, who was born during the Roosevelt administration, doesn’t exactly buy green bananas — the easiest thing to do is throw money at every problem.

Throwing money at things is how you make inflation worse.

Washington had already poured a lot of money into the economy during the COVID-19 emergency, and it was predictable that the emergency spending lasted longer than the emergency. By the time Biden was elected in 2020, Washington had thrown $2.6 trillion in budget funds at COVID and authorized a whopping $4 trillion in subsidized federal loans. That was new money worth about a third of GDP sloshing through the economy. Biden’s first priority was to push out another $1 trillion in a bogus infrastructure bill (which has little to do with the actual infrastructure) and a $1.9 trillion stimulus bill, even though the consumer price index is already under control, according to the Federal Reserve. rose sharply.

Boosting an already over-stimulated economy is how you exacerbate inflation.

Our inflation problem is only partly a matter of moderate monetary policy and reckless spending. There are also problems in the physical economy in the real world, those “supply-chain problems” that we hear about. The Biden administration has done extremely stupid things to make it worse, perpetuating the Trump administration’s worst anti-trade policy. That “Made in the USA” talk sounds good on the stump, but the truth is that we need a lot that we don’t make at home and won’t make – including much of the steel and other essential inputs for high-value production that we really do here.

The unbelievable fact is that the Biden administration still had punitive tariffs on Ukrainian steel as it sought financial support for the Ukrainians — it was only when the Chamber of Commerce and conservative critics started making a stink that the government changed its stance.

Biden has rejected clear-cut reforms, such as waiving the Jones Act, which prevents goods — and fuel — from moving from one US port to another by ship. It has supported unions’ efforts to prevent operators from improving the capacity and efficiency of our ports through automation, sacrificing those advances in favor of a make-work policy for dockers. Hardly any of that “infrastructure money” has found its way into any project that would actually alleviate supply chain problems.

By disrupting trade during a supply chain crisis, you exacerbate inflation.

The United States, Canada and Mexico make up a formidable energy superpower. But it doesn’t matter how much oil and gas you have if you can’t get it to the refineries and then the refined products to the consumer. Biden killed the Keystone XL pipeline and his EPA is at the neck of developing a new conventional energy infrastructure. As gasoline prices skyrocket, US refineries in the Gulf are sending much of their gasoline to Mexico for sale because there is no economical way to get it to the Northeast or West Coast.

Biden is considering a trip to Saudi Arabia to beg OPEC to produce more oil — apparently no one told him Midland, Texas, is a whole lot closer.

By driving up energy prices for no good reason, you make inflation worse.

Inflation is sometimes associated with a booming economy, but our economy shrank in the last quarter. Biden, who was in the Senate in the 1970s, is old enough to remember the word “stagflation,” which is what you get when you have a stagnant economy and inflation at the same time.

And that’s how you make inflation worse.

Kevin D. Williamson is the author of “Big White Ghetto: Dead Broke, Stone-Cold Stupid, and High on Rage in the Dank Woolly Wilds of the ‘Real America’.”