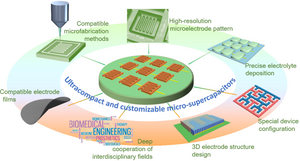 The increased demand for super-small electronic sensors from healthcare, environmental services and the Internet of Things prompts a search for equally small ways to power these sensors. A review of the state of play of ultra-compact supercapacitors, or “micro-supercapacitors,” concludes that much research remains to be done before these devices can deliver on their promise.

The explosion in demand in recent years for miniaturized electronic devices, such as health monitors, environmental sensors and wireless communication technologies, has in turn stimulated the demand for components for those devices that are getting smaller and smaller, with lower power consumption. at cheaper prices.

Illustrative of the need for such high-quality yet small components for electronics are the emerging but substantial needs of the Internet of Things – the embedding of multiple microsensors that can receive, process and transmit signals through a range of applications from smart-home technology to healthcare. Such microsensors tend to be deployed in extremely confined spaces.

And since these microsensors – like their macro cousins ​​- have to run on energy somewhere, they have to be coupled to equally small ‘micro-power’ sources. But the integration of conventional energy storage devices such as batteries, even very small ones, makes the sensors far too heavy and bulky for the demands of the Internet of Things.

As a result, scientists and engineers have explored the possibility of converting energy sources such as light or even mechanical vibrations into electricity, but this still requires some sort of energy storage to compensate for the intermittent and instability of these sources.

What can the work of a battery do but not be as bulky as a battery? Micro-supercapacitors are an option.

Capacitors may be familiar to electricians and electrical engineers, but the general public may be less familiar with how they work than with batteries. A capacitor stores energy, but in the form of an electric field rather than chemically like a battery. It cannot store as much energy as a battery, but it can charge and release its energy much faster.

A super capacitor is a capacitor with much more energy storage capacity than a regular capacitor, making it an intermediate station between capacitors and batteries. And an ultra-compact supercapacitor, or “micro-supercapacitor” (MSC), is a supercapacitor that is small enough to be integrated into micro- or even nanoelectronic systems.

It is these MSCs that have received increasing attention in the age of the Internet of Things, in particular to enable self-powered and wireless micro- and nanoelectronics. This is due to their exceptional output power, ultra-long lifetime of approximately 100,000 cycles, more controllable diffusion paths for electrons or ions (the tiny kinetic ‘actors’ that do all the work in electronic systems), tunable output performance and easy integration with super small systems.

“But there are still many challenges to make all this work,” said Zhong-Shuai Wu, co-author of the review and professor at the State Key Laboratory of Catalysis, at the Chinese Academy of Sciences. “So we felt it was time to put together a review article so that the field can better identify what we did well and what still needs to be fixed.”

The evaluators concluded that the size of most MSCs reported in the scientific literature remains too large to be easily incorporated into microelectronic systems. Limited attention has been paid to the fabrication of ultra-small MSCs smaller than ten square millimeters, and to micro-scale hyper-compact electrolyte confinement (a key element of MSCs).

A major challenge for MSCs remains the need to reduce the feature size, including the length, width, and the gap between adjacent microelectrodes of the microelectrode. All this would improve the integration of MSCs in the relevant devices. Along these lines, many MSC studies have focused on high-precision microfabrication techniques such as photolithography, laser writing, focused ion-beam etching and new printing methods.

Other recent MSC advances include the development of superior resolution, tunable output voltage, improved capacitance (the ability of the MSC to collect and store energy in the form of electrical charge), and deposition of conformal electrolytes.

Despite some impressive performance, especially at the nanometer scale, the energy and power density remains unsatisfactory for cost-effective performance. In addition, theoretical understanding needs work. In this regard, the authors argue for more interdisciplinary collaboration given the number of fields relevant to MSC research, and would like to see machine learning introduced to help accurately design MSCs to more accurately meet the diverse demands in various smart application scenarios.

Nano Research Energy is launched by Tsinghua University Press, with the aim of being an international, open-access and interdisciplinary journal. We will publish research on advanced advanced nanomaterials and nanotechnology for energy. It is dedicated to exploring various aspects of energy-related research utilizing nanomaterials and nanotechnology, including but not limited to energy generation, conversion, storage, conservation, clean energy, etc. Nano Research Energy will publish four types of manuscripts , namely: Communication, research articles, reviews and perspectives in an open-access form.

SciOpen is a professional open access resource for discovering scientific and technical content published by Tsinghua University Press and its publishing partners, providing the scientific publishing community with innovative technology and market-leading capabilities. SciOpen provides end-to-end services for manuscript submission, peer review, content hosting, analysis and identity management and expert advice to ensure the development of any magazine by providing a range of options for all functions such as magazine layout, production services, editorial services, Marketing and promotions, online functionality, etc. By digitizing the publishing process, SciOpen increases reach, deepens impact and accelerates the exchange of ideas.