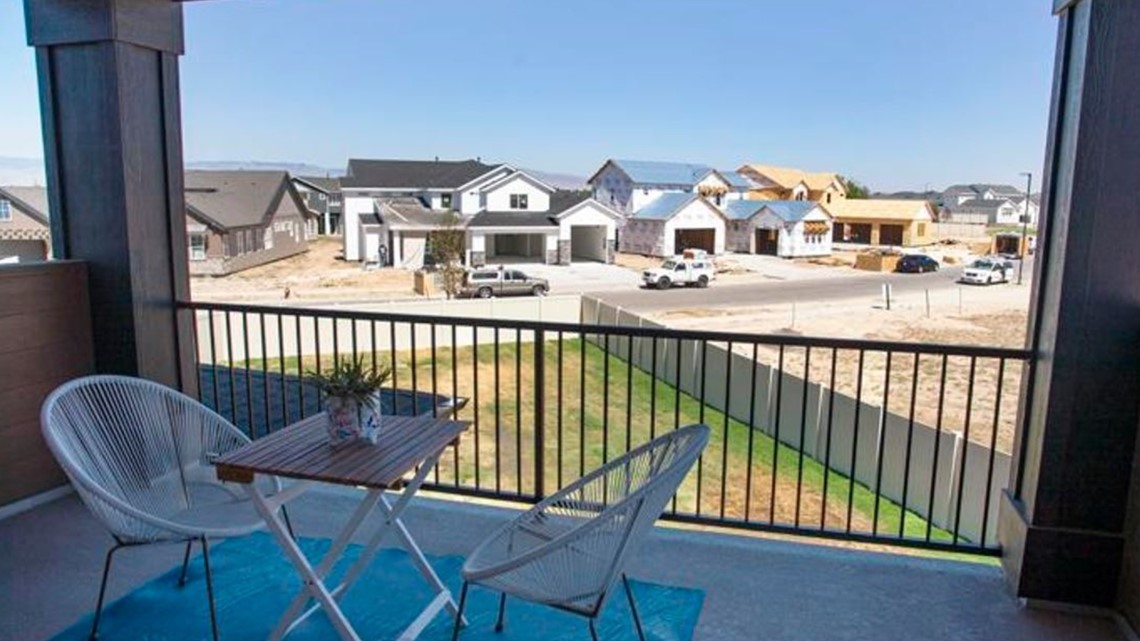 Many builders have delayed or halted new projects, just finishing what they have going on while waiting to see what the market will do.

BOISE, Idaho — This article originally appeared in the Idaho Press.

On the way to Meridian’s Sky Mesa subdivision, a sign advertises new homes and large lots. A family with floats and pool noodles crosses the street to an infinity pool.

Construction workers, contractor vehicles and portable toilets line the streets as workers lift planks over their heads. Several homes are wrapped in Tyvek behind the backyard of a newly built $1.3 million home for sale.

It’s this higher end of the market that’s still moving pretty fast in the Boise area, as people buying homes over a million dollars don’t have to worry about interest rates that have nearly doubled in a few months.

But builders are holding back other low-end projects because buyers, with new options, take the time to look and buy.

“Ironically, if you price it competitively, I see that the luxury market, which is that inventory, is actually moving a little bit faster than some of the others,” said RE/MAX Capital City broker Sheila Smith. “I think it’s because they’re a bit isolated.”

Home buyers with deep pockets can use private financing or cash, which are not as affected by rising interest rates.

Inventory is still rising across all price ranges, but “we’re actually getting those (luxury homes) moved,” Smith said.

On the construction side, however, manufacturing builders are ceasing to build homes at the low end of the market, said Matt Weston, director at Weston Real Estate Services powered by Amherst Madison. The company focuses on the development and construction of infill in Boise.

Many builders have delayed or halted new projects, just finishing what they have going on while waiting to see what the market will do.

However, rising supply in June led to declines in home prices in Ada County, the Idaho Press previously reported.

For example, Smith listed an apartment for $315,000 this winter. Another comparable unit in the same building is now for sale, but for $290,000, down from about $25,000 for comparable units with the same number of bedrooms and square feet.

Some people react too quickly, Smith said, and aren’t used to being patient. Houses used to be sold much faster and now sellers think that a house is too expensive because it is not sold immediately. But the reality is that people now have choices.

“There’s this kind of gun jumping, which I think is part of what we’re seeing,” Smith said. “We’re seeing falls in value because we’re doing all these price drops in response to this increased supply.”

But affordability is still a big issue. Even if prices fell 10%, Smith said, with the higher interest rates, buyers are lagging behind. In addition, those who want to move from their current home to the next may have a 3% flat rate and may be reluctant to buy another home.

“Until interest rates fall or prices fall, there are more and more people who are still being priced out of the market and are among Boise’s employees,” Smith said.

Smith thinks the market will correct itself. Either there will be a massive rise in rents and a corresponding increase in multifamily housing, or the market will adjust downwards, she said.

But right now there are more opportunities than in the overheated seller’s market Boise has been experiencing in recent years. VA loans, for veterans, and FHA loans, which require lower credit scores and down payments, are honored. FHA loans are popular with first-time home buyers.

“I’m so happy that these buyers finally have a voice again,” she said. “I don’t think people need to be afraid… this is a healthier market.”

Weston agreed. He said the market has changed, but sales figures show that Boise is not far from where it was from 2016-2018.

“That may not be a bad thing,” Weston said. “I don’t know if the market has been very sustainable in recent years. Our poor local buyers have just been hammered in recent years.”

There’s a lot of inventory in western Ada and Canyon counties, Weston said, but production house builders are waiting for fresh starts in those areas as well. The relationship between supply and demand is changing.

Weston said that builders waiting to build new ones influence some price points more than others, especially the lowest and the extremely high ends.

“We’re afraid to do anything over $1.2 million because that market has weakened quite a bit in all areas,” Weston said. “In the COVID years, those price points exploded due to low inventory and high demand and the influence of money out of state.”

There’s a silver lining to the Boise market now, Weston said. The market is recalibrating. The country as a whole is missing millions of homes. The Boise area is growing and will continue to grow and attract people.

“This is a fantastic time for our local buyers to find their home and their dream home and make the investment for the future of five to ten years,” Weston said. “This could be the window for next year.

Once we recalibrate and our market tightens up again, we will see an increase in out-of-state buyers again. ”

This article originally appeared in the Idaho Press, read more at IdahoPress.com.

Check out the latest growth and development news in our YouTube playlist: