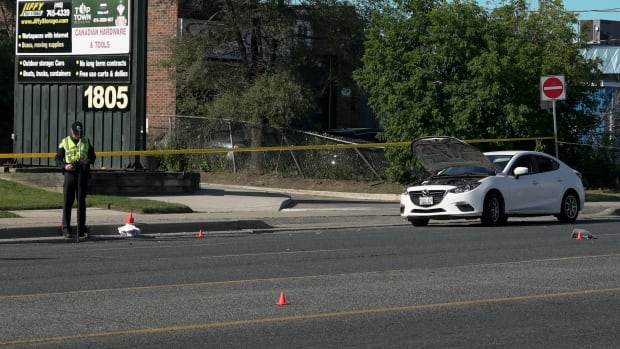 A 42-year-old Kingston, Ont. man faces drunk driving and criminal negligence charges after fatal collision in Toronto over the weekend.

In a press release on Monday, Toronto Police said two vehicles collided at approximately 3:35 a.m. Saturday in the Wilson Avenue and Clayson Road area, near Highway 401 and Highway 400.

One of the vehicles hit a pedestrian and the driver of that vehicle fled. He was later located and arrested. The pedestrian, a 22-year-old man, was taken to hospital, where he later died of his injuries.

Police said the pedestrian was crossing Wilson Avenue at Clayson Road heading south when a 2007 black Lincoln Navigator heading east on Wilson Avenue hit a white Mazda 3 heading west. The Mazda was stopped at a red light on Clayson Avenue. The Lincoln then hit the pedestrian.

The suspect has been charged with: driving under the influence which caused death; criminal negligence causing death; not stopping at the accident site resulting in death; driving while prohibited; and two counts of non-compliance with a release order.

The man is due to appear in court on Tuesday via a video link.

The police are asking local residents, businesses and motorists who may have CCTV footage of the area or the collision to come forward.