During his summers as a college student, Zaid Al Bahrani worked as a counselor at Camp Kesem in Ohio, a week-long camp for children affected by a parent’s cancer diagnosis.

Some children had already lost a parent to cancer, and some saw their parents deal with the effects of the disease every day. The camp gave the children the opportunity to meet others who could understand what they were feeling: anger and hope, sadness and frustration, confusion, sadness and sometimes peace.

“The way each child reacted to the trauma they had experienced was very, very different,” Al Bahrani recalled. “Then I noticed how much I was drawn to this facet of the human experience. I began to see that as individuals we can have beliefs that are seemingly paradoxical, but both are true. That ambiguity and nuance made me want to understand people on a deeper level.”

That desire to delve into the contradictions and contrasts of the human experience motivated Al Bahrani as a student at the University of Colorado School of Medicine and, after graduating this month, will support him in embarking on a four-year psychiatry residency. , also in the CU Medical Faculty.

“People are just so incredibly complicated in a really beautiful way, and psychiatry tends to lean into the ambiguity of the human experience,” he says. “In medicine, there are objective metrics and objective signs of treatment, and what excites me about psychiatry is balancing that with the moving target of what it means to be human.”

Finding a place in a new country

In many ways, Al Bahrani understood and was closely associated with the paradoxes and multiple identities experienced by the children in Camp Kesem. He was born in Iraq between wars at a time of intense turmoil.

As the war consumed the land, his parents sometimes slept on top of him and his older brother and sister, not knowing where or when the bombs would fall. They made the difficult decision to emigrate to the United States and initially had little money. His father worked very hard and his parents’ basic goal was to move to a country that is safe and offers good education.

Zaid Al Bahrani, left, as a child with his mother and father, Saba and Mohamed Al Bahrani

From an early age, Al Bahrani lived with the insecurity of a dual identity, struggling to make his way as a Middle Eastern emigrant living in a small Ohio town and as an American. He also experienced the bullying many children of Middle Eastern descent had to endure after September 11, 2001.

“In the midst of that bullying, I felt very lonely,” he recalls. “One of the central emotions of childhood was loneliness, which exacerbated my identity conflict. It was loneliness, not just in friendship, but the loneliness of not belonging.”

In high school, he’d learned the survival skills of easy-going kindness, which allowed him to move comfortably between cliques — he jokes that he learned to be outgoing on the outside, even if the inside was a little more complicated.

Learning to balance empathy and objectivity

As a student at Case Western Reserve University in Ohio, Al Bahrani studied chemistry, psychology, and Arabic — he spoke the language but couldn’t read it until then — and considered his future. His parents encouraged him to consider medicine, a path his brother, now a radiology assistant, and his sister, now a dentist, also followed. 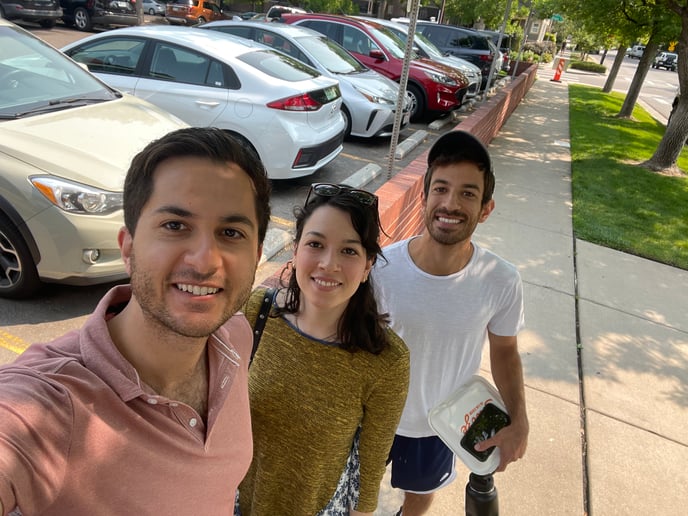 Zaid Al Bahrani, right, with his brother and sister, Faisal and Laya

He wanted to respect the wishes of his parents, but he also wanted to become a teacher. However, he often had to reflect on his experiences as a counselor in camp Kesem and also in a rape crisis center where he volunteered.

“At the rape crisis center, it was easy to tap into my empathy so strongly that I found myself not present on some of the calls I would receive later in my service,” he said. “I struggled to find that balance between being empathetic and observing enough to be present at my next encounters.”

A mentor suggested that a career in medicine would still allow him to become a teacher as he would have the opportunity to train medical students and residents as well as patients. So he applied to medical school.

Even when the impact of his experiences led him to psychiatry, Al Bahrani still had moments during medical school where he considered other specialties. Each new area of ​​study was fascinating, and in his role as class president for the past four years, he worked with students and faculty from the CU School of Medicine.

During rotations in the emergency psychiatry department at Denver Health Medical Center, and working with Ashley Curry, MD, an assistant professor of psychiatry at the CU School of Medicine, “I began to see that these are very important moments in life. of these individuals,” he explains. “For many people who have access to emergency psychiatry, these are arguably the worst moments of their lives. So being there for those individuals, being able to de-escalate and decide which interventions are most appropriate, really think about what’s happening on the medical side as I synthesize their story and work with them to understand what they’re doing. experience – that’s when I knew what I wanted to do.”

In his personal statement for his residency application, Al Bahrani wrote about how his own experiences with culture and connectedness influenced his desire to pursue psychiatry. He shared that he had only used bidets until his senior year of high school, which “led to many early departures from the homes of his friends growing up”.

“It’s those little cultural differences that really shape our perceptions,” he says. “Not everyone goes through an immigration process, but I think we all still have these parallels of identity and we’re all trying to understand how our identities can compete.”

Even in the less serious aspects of identity, Al Bahrani reflects on his experiences. He admits with a laugh that he is a serial hobby jumper, who becomes hyperfocused on a new interest until the next one catches his attention.

While in medical school, he played on a soccer team for three years until competitive volleyball caught his eye, loved to ski until he got a concussion, concentrated on rock climbing for a while, taught himself to play a little piano and guitar, and also found time for movies. and gaming.

After graduating this month, an event his close-knit family will attend, he will begin his residency in June. He looks forward to learning more about balancing the science of medicine with the nuance of human thoughts and emotions.

“I try never to assume that anyone else’s experience is similar to mine, but I think as humans we have a lot of things in common,” he says. “I think we’ve all had thoughts that we don’t like. We’ve all tried to understand our different identities and how they make us who we are.”