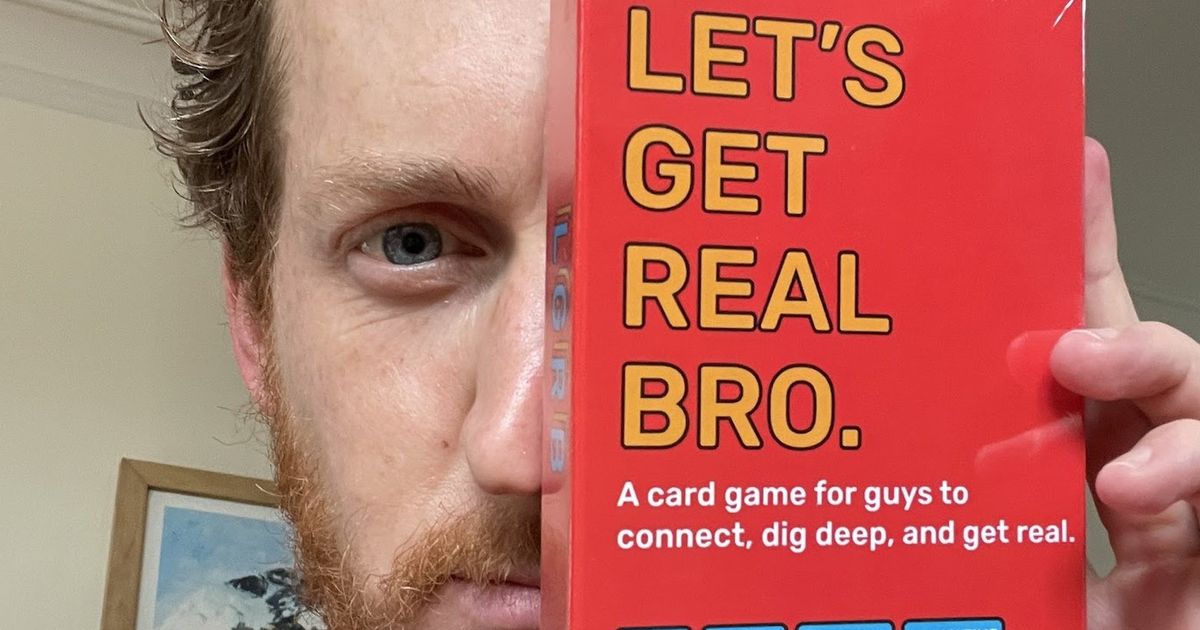 The Mental Health Project is a Seattle Times initiative focused on covering mental and behavioral health issues. It is funded by Ballmer Group, a national organization focused on economic mobility for children and families. The Seattle Times maintains editorial control over work produced by this team.

“Cards Against Humanity meets your therapist,” is how Weston Karnes describes his new card game designed to spark conversations between men about their mental health.

Karnes, a product designer in Seattle, launched the game “Let’s Get Real Bro” in December with the goal of encouraging deeper, more intimate conversations that are often missing in male-dominated spaces.

Here’s how the game works: The asker picks up a card with a question like, “What message would you put on a billboard in Times Square for millions of people to see?” Each player writes down a response and the asker chooses their favorite.

There are three levels of card decks within the game, which each dive deeper into more personal questions. Through a sponsorship from the online-counselling company BetterHelp, a fourth level allows players to redeem a card for a free month of therapy.

Karnes has sold 1,000 copies of the game, and has 5,000 more on order. It costs $29 and can be bought online. Karnes is also collecting $1 from every purchase to donate to an organization specializing in men’s mental health.

In a Q&A with The Seattle Times Mental Health Project, he shared his motivation for creating the game and why he’s passionate about supporting men’s mental health.

What was your inspiration for the game?

It started with some of these other conversation card games out there, like Cards Against Humanity. I’ve always been one to want to go deep in conversation, but my desire to have deep conversations is not something that I see often in men.

I’d been sitting with this idea in my head. One morning I designed the webpage and it all kind of just came out. It was like, whoa. I showed it to my wife and we both got really excited and that was pretty much all I needed to really get the ball rolling.

Why did you decide on a game format?

I’m a product designer by trade so I’m always thinking about user experience. I kept coming back to this question of, how do you take the best parts of what’s going on in men’s groups, which is support, connection, honest conversations about mental health and vulnerability, and make it more accessible? That was the design question and why I chose a game. I think guys especially appreciate structure. It’s nice when there’s a fixed end.

We don’t use the language of winning, but there is some type of point system. Every card allows the individual to choose their own degree of depth so no one is forced into sharing raw, vulnerable stuff before they’re ready.

How would you hope men use the game?

Therapists, counselors, youth mentors — they seem to be the biggest fans of the game. I’m very keen on finding a more mainstream use case.

In heterosexual relationships, there will be plenty of women buying it for their boyfriends, their husbands, and that’s something I’m OK with. The reality is, it’s a lot easier in some ways for a woman to initiate this than for a guy. Where are the contexts in which it’s allowed, in which one feel safe doing it?

What’s been the response from players so far?

There have been people who experienced a moment of transformation while playing, like some type of healing conversation with a parent. For me, it’s been an opportunity to get people together and really be intentional about connecting.

How did you design the game to market it to men?

The branding says it’s a game for guys to explore all the things we don’t want to, to get to the things we do. Underneath in parentheses, it’s like real talk, feelings of emotions, masculinity to get to connection, support, mental and emotional help. I think some people are going to be turned off by that, and that’s totally fine. But I want to be super direct and upfront about what this game is trying to do.

What has been your experience with mental health?

In high school, I had a lot of anxiety, really trying to hide myself in any way possible from shame and embarrassment.

Through my 20s and evolving as a person, doing a lot of therapy and meditation, I’ve come to a place now where I see how important relationships and more honest and authentic conversations were for me and my own mental health.

What brought you to men’s groups?

I think it was inevitable. My own need and desire for connection has been the driving force throughout my entire life. It’s trying to find relationships and experiences that feed that. As I continued moving through life, I saw that it was harder to access that with men. That was deeply saddening, and kind of lonely.

I remember my sister telling me about a woman’s circle that she went to. I knew I wanted that, but didn’t know where to get it. I moved to Oakland in 2015 and started exploring myself and that world more. I saw that there are other men that want this, but it’s kind of tucked away in the corner.

I’m still learning about the ways in which one connects with one another. What are the things that prevent it? Why do women go there and men don’t? How much of that is cultural, and why am I different in some ways?

What have been your experiences with men’s groups?

There’s all sorts of different ones out there. The one in Oakland wasn’t the right fit for me, but it showed me something that was really beautiful: older men leaning on one another and trying to build community. I ended up creating one with a couple other people that I met in a meditation context, and we probably had seven or some men, we met on a biweekly basis for two hours.

A lot of the men’s groups out there are a similar kind of structure. There’s also more where the structure is a check-in, where each person goes in turn sharing what’s going on in their life. And then there might be a conversation at the end. There are also more formal kinds. I’m speaking with a guy who runs three to six month long intensives about building awareness, building emotional intelligence, building some of these skills.

What’s next for you?

I really see the brand of Let’s Get Real Bro being beyond a game. My hope is that this can be a doorway to other investments in mental health and connection.