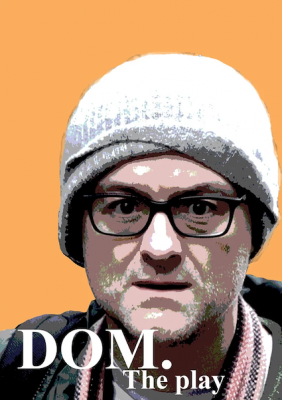 Dom – the Play, at the White Bear Theater

Dom is a fast-paced, sharp comedy about Dominic Cummings, the most controversial figure to emerge in British politics over the past decade. Was he a creative visionary or a threat to democracy?

Cummings (played by Chris Porter) takes the stage to give us his vision and versions of events, shed light on Brexit referendum tactics (including that bus), his trip to Barnard Castle, Covid and Boris Johnson’s advisor. He is outspoken, very confident and takes no prisoners.

Neil Green’s tight script, based on political memoirs and historical research, rages on, without a word wasted or a dull moment. The audience laughed all the time.

Energy sparks between Cummings and Johnson, as Cummings struggles to manage the narcissistic and chaotic Prime Minister. Anyone who has seen Boris Johnson up close in real life (which I have) will find his rendition creepy.

Cummings is often and furiously frustrated, whether it’s with the civil service, with Marcus Rashford over free school meals or, most importantly, with Carrie’s constant interference.

Cummings’ enemies and others who appear include David Cameron, Nigel Farage, Nicola Sturgeon, Tony Blair, Prince Andrew, Richard Branson, John Prescott, Angela Merkel, the Queen, Meghan Markle, Carrie Johnson, folks at the Guardian – and even a dancing Theresa Can. These roles and more characters are played by Sarah Lawrie and James Groom, who switch poses and accents quickly and convincingly.

Although it is a comedy, the play does not deal with sensitive issues. Nor is it a one-sided diatribe — the voters who continue to charge Cummings are weak and aggressively self-righteous.

I wasn’t surprised to learn that this sharp satire is nearly sold out. Buy a ticket while you still can.