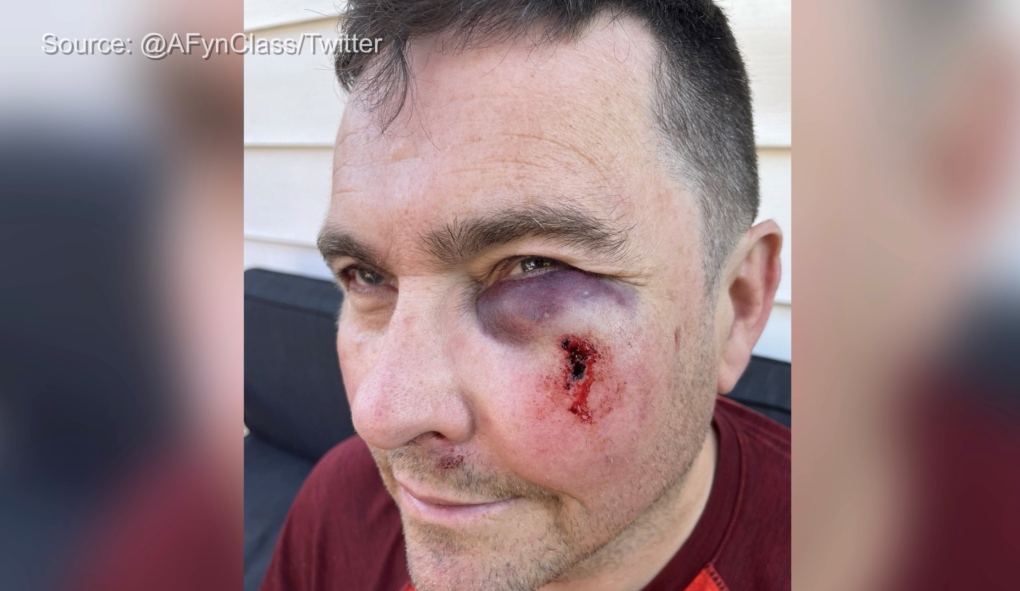 A London, Ont. cyclist is still recovering after being punched by a driver during his commute on Thursday.

Peter Riley was a little bloodied and badly bruised, but said the incident won’t keep him off his bike.

Reactions on social media poured in after Riley’s wife shared images of her husband showing significant swelling and a deep purple bruise around his partially closed left eye. There was also a small cut on his cheek.

The events leading up to the punch started on the east side of Adelaide Street, just south of Kipps Lane.

“Where the bike lanes start, a car was blocking the bike path,” explained Riley, “I had to get off in the middle of the road to get around it.”

The location on Adelaide Street North in London, Ont. where Peter Riley confronted a driver for being on the bike path, as seen on June 24, 2022. (Gerry Dewan/CTV News London0Then things started to get hot and Riley told CTV News, “I yell at him, ‘You’re blocking the bike path,’ something along those lines, and he yells back with a string of profanity.”

Riley continued north on the bike path, thinking the episode was over. He came to a stop at the traffic lights at Adelaide and Kipps, but the man sped past, turning into Kipps ahead of him, and the confrontation escalated.

According to Riley: “He gets out of the car” [and] walk towards me. I expected him to yell at me. I actually pulled out the phone and grabbed a picture of him getting out of the car, but he just punches me in the face.”

Riley says his injuries are minor, but it will take some time for the swelling to go away. The London police have now released a photo of the suspect.

const. Sandasha Bough said they are seeking additional help with the investigation.

“We’re asking for dashcam videos or additional photos, or if you recognize the suspect, please call us,” she said.

The suspect is described as a white male, 35 to 40 years old, of medium to heavy build, wearing a baseball cap and navy blue shirt.

London police are enlisting the public’s help in identifying a man who allegedly attacked a cyclist in north London on Thursday afternoon. (Source: London Police)Riley thinks gaps in cycling infrastructure could lead to confrontations. He has cycled in countries with a more complete cycling network and believes this will lead to more acceptance.

“Motorists in the Netherlands have an incredible amount of respect for cyclists and there are very few conflicts,” he said.

He believes the city is working to improve the cycling experience, but there is still a lot of work to be done.

At the place where Thursday’s incident started, the bike paths end short, allowing riders to choose the road or the sidewalk. Lanes resumed at a ramp to an apartment complex where the confrontation took place.

But Riley doesn’t want his incident to stop people from riding their bikes.

“I don’t want people to hear this and say, ‘This is too dangerous.’ It’s not. I’ve been doing this for 20 years and this is the only time something like this has happened,” he said.