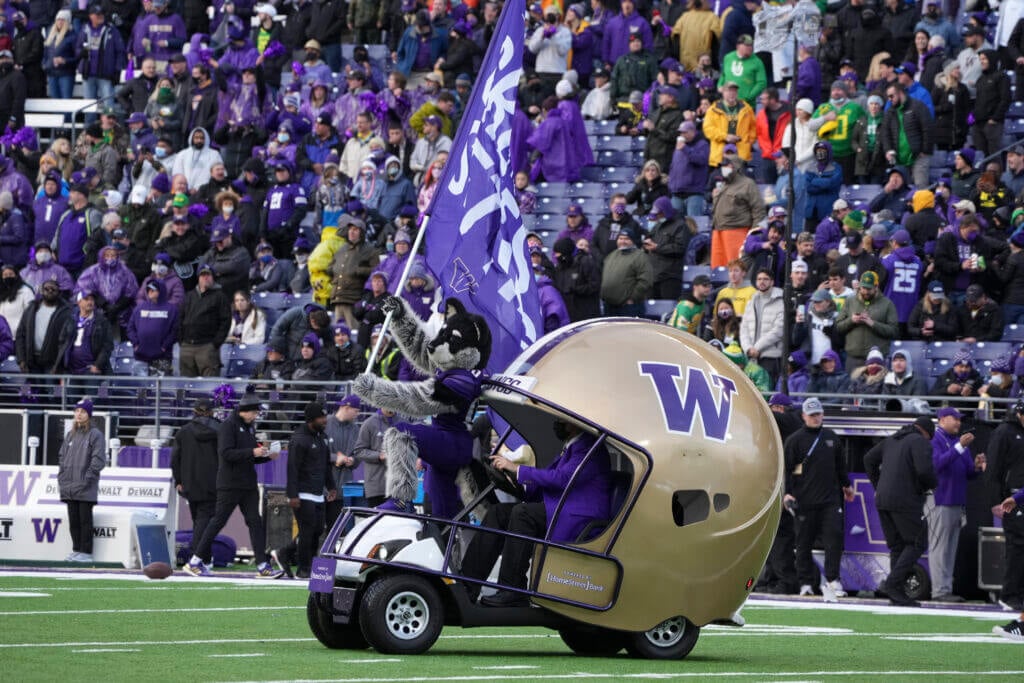 Right after the Oklahoma-and-Texas-to-the-SEC bomb broke out last summer, I conducted a frenetic research project into the TV value of the eight remaining Big 12 schools. There was speculation at the time that the Pac-12 or some other Power 5 conference would drop in and invite several of those schools. I quickly realized that wasn’t going to happen, seeing how poorly programs like Oklahoma State and Baylor fare in the Nielsen ratings if they weren’t up against the Sooners or the Longhorns.

A year later, the Pac-12 finds itself in much the same predicament after USC and UCLA’s shocking departure to the Big Ten. Since the Big 12 has since stabilized with the additions of BYU, Cincinnati, UCF and Houston, there are now rumors of that league trying to poach a combination of the remaining Pac-12 programs.

With the Pac-12 knee-deep in a 30-day negotiation with ESPN and Fox for the next deal, it was a good idea for me to conduct a similar survey of the TV appearances of the 10 remaining Pac-12- schools. Are those schools worth more, less, or about the same as the eight Big 12 holdovers? And does the data support the prevailing notion that Oregon and Washington are particularly valuable brands?

The only thing I regretted about that Big 12 story is that it only looked at data from two seasons (2018 and 2019). That is too small a sample size. Coincidentally, my colleague Andy Staples (with the help of Sports Media Watch) has since compiled a massive database of every Nielsen-rated game since 2015 (excluding the statistically crappy 2020 season). This not only allowed me to go deeper with the Pac-12, but revisit and update the Big 12 for apples-to-apples comparisons.

(I didn’t include BYU, Cincinnati, UCF, and Houston in the sample of the Big 12 because they weren’t Big 12 members at the time and, in the case of the last three, were largely related to Group of 5 and not with Power 5 opponents. )

The home games of both conferences on ABC, Fox, ESPN, ESPN2, FS1, and ESPNU were included. Unfortunately, no data is available for the Pac-12 Network, Longhorn Network, or ESPN+, which began broadcasting Big 12 games in 2019. But it’s still a relatively similar amount of inventory – after removing the departing members’ games, about 52 per year from the Big 12 and 48 from the Pac-12.

It’s definitely still a gut punch, but neither USC or UCLA have been as big a draw as Oklahoma or Texas lately. Over six seasons, the Sooners averaged 3.26 million viewers per game, the Longhorns 2.7 million. During the same period, the Trojans averaged 2.17 million per game, the Bruins 1.55 million. While Oklahoma and Texas were the clear top two of the Big 12, USC was not significantly ahead of Oregon (2.02 million), while UCLA was sixth in the Pac-12.

Of course, this period coincided with Clay Helton’s disappointing tenure at USC, in which the Trojans went 46-32 and won one Pac-12 title. The TV networks would know much better how well USC scores if it wins big, like it did during the Pete Carroll era.

That said, Texas was 40-36 during the same period and averaged half a million more viewers than the Trojans.

However, there is a clear reason for this. The conference’s two media partners generally put their best games every week on over-the-air networks ABC or Fox, where games usually draw higher ratings than on cable. Oklahoma and Texas appeared on 46 and 33 such broadcasts, respectively, compared to 28 for USC and 16 for UCLA.

Overall, 73 percent of Fox and ABC’s Big 12 rosters included the two outgoing members, versus 53 percent for the Pac-12. In fact, Oregon was picked 18 times, twice more than UCLA.

Then why don’t the Big Ten take Oregon in place of or with UCLA? Because the Los Angeles television market is much more valuable.

It currently covers nearly 5.5 million households. Getting the Big Ten Network (the majority of which is owned by Fox) on basic cable lines is expected to generate tens of millions in new subscription fees each year — whether or not those subscribers watch a single UCLA game.

Oregon, which entered the College Football Playoff the year before this period began, won a Rose Bowl in 2019 and finished two other seasons in the AP Top 25, averaging 1.96 million viewers, even excluding the USC and UCLA games. . For perspective, the highest remaining Big 12 program, Oklahoma State, averaged 1.28 million.

The second highest achiever was a mild surprise: Stanford (1.83 million), beating Washington (1.73 million). While the Cardinal has been terrible in recent seasons, they were remarkable ratings in the days of Christian McCaffrey and Bryce Love. In 2016, a Friday night ESPN game between No. 7 Stanford and No. 10 Washington drew 3.3 million viewers, the third highest of all Pac-12 games that season.

Stanford also gets a lot of miles out of its two-year home games against Notre Dame. The two have played every year since 1997 (except 2020). The four episodes in this period averaged 4.8 million. While there’s no guarantee that the series will go on forever, an ESPN or Fox could pay hefty fees for the rights in the event that it does.

Everyone except Arizona and the state of Oregon averaged at least 1.2 million viewers

Below is a breakdown of the average ratings for the remaining Pac-12 and Big 12 schools, from 2015-19 and 2021. (Games against Oklahoma/Texas and USC/UCLA are excluded.)

That 1.2 million figure would be laughed at in the Big Ten or SEC. As Staples recently wrote, even excluding major games against Alabama and Georgia, Auburn has a median audience that is twice as high (2.4 million).

But it may matter given the current Big 12/Pac-12 push that’s happening further down the track.

That average of 1.2 million is more than all but two of the eight Big 12 holdovers (Oklahoma State and TCU). Even Oklahoma State (1.28 million) would rank only seventh among the remaining Pac-12 schools. At first glance, that seems ridiculous, given that the Cowboys, who scored 12-2 last season and 57-22 in those six seasons, are light years better on the field than the lost Buffalos (33-42).

But I think I know the answer.

Pac-12 After Dark is a secretly big advantage

As much as the Pac-12 coaches and fans loathe those late games, they could be the savior of the league in the next deal.

While the Big 12 and Pac-12 have the same two TV partners, their deals are structured differently. The remaining eight of the Big 12 had many more of their games relegated to the rating graveyard that is FS1 than the Pac-12, while the Pac-12 got more pickups from the main ESPN. And that’s all because the league can post matches at 10:30 p.m. ET, when no other Power 5 leagues are playing.

How night games can be the key to #Pac12 rescue: “The great thing about the Pac-12 is that you can program that late window for 13 consecutive weeks,” says former ESPN executive @JKosnerhttps://t.co/yXeub7J736

Since ESPN almost entirely reserves its previous time slots for the Big Ten, SEC, and ACC, the Big 12’s best cable windows are usually on ESPN2 during the day. As far as the ratings go, it’s still better to be on the main ESPN regardless of the kickoff time.

For example, on Nov. 20 last season, the state of Arizona and the state of Oregon—two of the Pac-12’s lowest draw teams—played a 10:30 p.m. ET ESPN game that drew 1.11 million viewers. In doing so, they narrowly beat a Noon ESPN2 game that included Texas (against West Virginia). It sounds crazy, but the latter, which reached 1 million viewers, took on both No. 4 Ohio State vs. No. 7 Michigan State on ABC (5.3 million) and Clemson vs. No. 10 Wake Forest on ESPN (1.6 million), while the Sun Devils and Beavers were the only Power 5 teams still in action.

In conclusion, the Pac-12 is in better condition than was believed three weeks ago – provided it can keep the remaining 10 schools together.

The league won’t come close to meeting the SEC or the Big Ten in its next TV deal, but a consensus has recently emerged among TV pundits that ESPN will likely offer something enticing to calm the waters. (Fox, now that it has the existing Big Ten) and USC and UCLA are likely out of the picture.) Note that the new deal will likely include the rights to more than 30 additional games a year currently airing on the soon-to-be-released Pac-12 Network. ESPN would probably put them on its burgeoning ESPN+ streaming service.

Of course, if at any point the Big Ten changes its mind about Oregon and Washington, the remnants of the Pac-12 would be no better off than the remnants of the Big 12. But that doesn’t seem imminent. In the meantime, Commissioner George Kliavkoff should be urging those 10 schools to welcome a few new members (the state of San Diego would certainly be one), embrace the 10:30 p.m. ET kickoff, and look forward to a new era with more streaming ( hello, ESPN+ ) and possibly no FS1 or Pac-12 network dumps.

ESPN+ price up $3.00 on August 23. Based on 22.3 million subscribers, that’s nearly $840 million in additional revenue per year. Which collegiate conferences will get some of that money? I’m thinking of Pac-12 for a prime inventory on the West Coast.

The money won’t be $80 million a year like the Big Ten’s 2024 projections, but should be within screaming distance of the ACC, which got $36.1 million last year.

Like the Pac-12, the rebuilt Big 12 must be determined. But based on the ratings in this story, it’s hard to see why the Pac-12 would be in a weaker position.