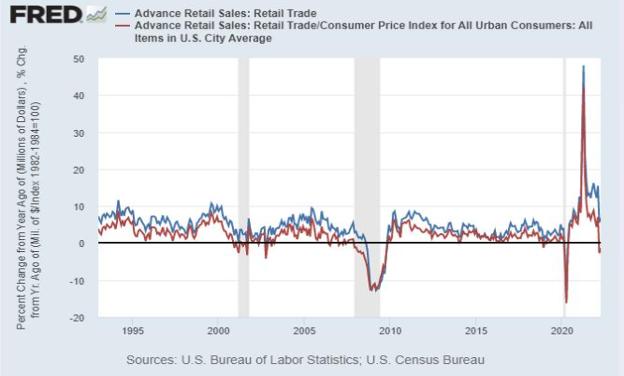 Market Volatility in Spades This Week! On Tuesday, the markets were all tweeting (oops, I can’t use that word!) about the big and unexpected spike in retail sales in April (+0.8%). That led to a +2.0% gain in the S&P 500. What market commentators failed to mention was that, adjusted for price increases, the “real” figure was negative (see chart above – red line).

On Tuesday, Fed Chairman Powell said they would continue to tighten financial conditions until “we see inflation fall,” and that it may not be easy and could come at the cost of higher unemployment. “You’d still have a strong job market,” he said, “if the unemployment rate went up a few ticks. I would say there are some plausible paths to have a soft, like I said, soft landing.” Note the reference to higher unemployment and the use of the word “soft” instead of “soft,” indicating that the Fed may not be able to tame inflation without problems for the economy.

On Wednesday, markets took Powell’s words to heart and the S&P fell -4.0% and the DJIA fell more than a thousand points (-1,165), now clearly beginning to recognize the reality of the “R” word. Volatility continued on Thursday, with markets fluctuating between gains and losses, eventually falling, with the S&P 500 moving closer to “Bear Market” territory (more than 20% below its peak). Then on Friday more volatility with markets deep in the red for most of the day before finishing near the flat line. At one point, the S&P 500 fell -2.3%. Had it closed there, the drop from the high would have been -20.6%. But there was a rally towards the end, and as the table below shows, it remained in “Correction” at -18.7%.

No control over delivery

Please note that the Fed has no control over the delivery of goods/services. It only affects demand through the shock interest rates have on demand and the impact of money pressure on the financial markets. The main concern we have, and we suspect similar concerns on the part of other market participants, is that supply problems continue to push inflation to higher levels, particularly events such as the total closure of cities in China and rising oil and food prices due to real or perceived shortages (Russia).

As a result, to reach its inflation target of 2%, the Fed would need to impact the 80% of the economy that is not based on energy or food. That would require a deep recession (-3% GDP contraction) and a rise in unemployment to 7%, according to Wall Street Economist David Rosenberg. Under those circumstances, expect a deep “Bear Market”.

The best-case scenario is that the supply side continues to heal and there is evidence that this is the case. For example, recent data on backlogs from the Institute for Supply Management (ISM) monthly manufacturing survey shows a sharp decline, signaling an easing in the supply chain.

Likewise, freight volumes have fallen back to “normal” levels, as evidenced by the Cass Freight Volume Index. The following came from Cass with the release of the index: “After a nearly two-year cycle of rising freight volumes, the freight cycle has shifted back with a thud.”

We note that car production rose +3.9% in April, indicating that the chip shortages caused by the closed assembly plants have decreased. Also, the number of ships anchored off California ports recently fell to 29, the lowest number since August last year. But what really caught our eye was the monthly CPI and PPI chart, which showed much lower monthly increases in April than those of the recent past. The right side of the chart shows that inflation in April was quite modest compared to the past few months.

We note that multi-family construction continued at a brisk pace (+22.5% year-on-year), which should suppress the rise in rents as the year progresses.

It would be nice if the Fed recognized these inflationary trends and became less aggressive.

Not so optimistic scenarios

But we don’t think that’s likely, at least not until the recession manifests itself in the concurrent and lagging indicators. But the looming recession is real. This is why:

Markets have now realized that recession (with a capital “R”) is a significant possibility (we consider it very likely), and Powell has now recognized this (after confirmation). So far, employment has held up. Weekly jobless claims remain resilient in terms of employment, and there still appears to be a shortage of workers in the service sector, especially in lower wages. But as the recession unfolds, that too will change. Small businesses are marginally more sensitive to economic changes than large ones. In its May 4 data release, ADP, America’s largest payroll processing company, reported -120K fewer payrolls in April for its small business segment.

And the small business outlook from the National Federation of Independent Business (NFIB) is equally bleak. These are leading indicators, and as a result we expect unemployment to start rising in the third quarter.

Finally, we haven’t even touched on the impact a bear market in equities could have on household spending. In this cycle, US household stock holdings have risen to $45 trillion (12/31/21) from $31 trillion just two years earlier. There is definitely an impact on the household psyche and spending. Of course, the majority of equity is in higher-income households, but those are the households that support cyclical spending. Although WMT and TGT have already told us what is happening to the spending patterns of lower/middle-income households, we suspect that cutting the spending of higher-income households will also not be trivial. In that sense, also consider what could happen to consumer spending if (when) house prices fall!

We suspect the Fed will stay hawkish until the employment data changes and becomes dovish if consumption sputters. We’re noticing at this point that Jim Bullard, the Fed’s biggest hawk, has suddenly gone silent. Perhaps the St. Louis Fed economists see the reality that we see.

†Joshua Barone contributed to this blog.†