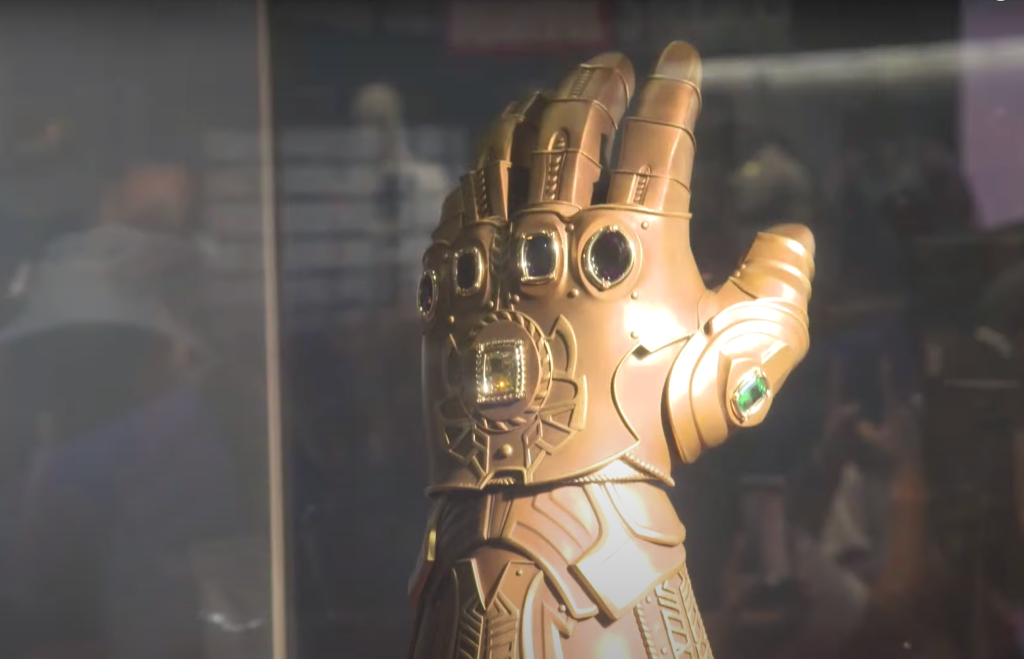 In what may be a case of life-inspiring art that in turn inspired more art, Marvel today at Comic-Con announced the creation of a true Infinity Gauntlet with six precious gems, including a ruby, an emerald, a sapphire, a diamond, a grenade and amethyst. Collectively they are called the Infinity Collection of Gemstones.

Per Marvel, “The six stones together are over 150 carats and have a total estimated value of over $25 million.”

shark cage star Daymond John unveiled the collectibles today, revealing, “There will be a limited number of certified copies and they will be available to the public in drops.”

The debut of the collection is a kind of round moment. It has long been suspected that the Infinity Gauntlet in the comics was inspired by a 16th-century Catholic relic: the pristine hand of St. Teresa of Avila. The relic is said to be the actual hand of the saint, but in photos it appears to be metal rather than flesh, with rings on each finger containing precious gems. The new glove and Infinity Collection of Gemstones appear to reflect the piece’s origins.

Paul Gitter, SVP, Marvel Consumer Products said in a statement, “Fans and collectors are a very important consumer for Marvel as they truly experience the Marvel lifestyle every day and always want to connect with the brand in new and unique ways. We find this authentic gem collection to be cool and unexpected and extend the reach of the Marvel brand.”

Adam Mirzoeff, a fourth-generation jeweler and president of East Continental Gems, curated the collection while Darren Romanelli, aka DRx, was the collection’s Creative Director.

The Infinity Gauntlet modified to house these gems was specially made by Gentle Giant Ltd., a high-end collectible toy and consumer products company.

Here is a description of each of the real stones and what they represent:

The time stone is a Colombian emerald, brilliant in color. Documented by four gem labs, this gem has undergone no treatment, nearly 23 carats. In the Marvel Universe, the Time Stone has the ability to manipulate time, even in places out of time.

The space stone is a sapphire from the island of Madagascar and clocks in at over 30 carats. In the Marvel Universe, the Space Stone allows the user to exist in any location, move through different realities, warp or rearrange space, teleport over airplanes, regardless of the laws of physics or magical barriers.

The Reality Stone is an oval-shaped, 15-carat natural ruby ​​from Mozambique, Africa. In the Marvel Universe – Tasks, realities, concepts, visions – things that would normally be impossible to realize are made possible with the Reality Stone. It can retroactively create alternate realities around those changes.

The Power Stone is an oval-shaped, natural amethyst of more than 35 carats.
In the Marvel Universe, the Power Stone allows its users to access and manipulate all forms of energy, as well as enhance their own physical strength and durability. At full potential, the Power Stone can grant omnipotence. Notably, the jewel amplifies the effects of the five other stones; it’s like a key of sorts to start the Infinity Stones’ engine as a single collective force. The ultimate power behind the Power Stone – and why it only takes pride of place on the Infinity Gauntlet – is how the stone interacts with the others.

The soul stone is this pillow-shaped, orange-red Spessartite grenade of over 35 carats. In the Marvel Universe, the Soul Stone served as inspiration for the rest. It can manipulate a person’s soul and essence, control life and death and contains a pocket dimension called the Soul World.

The Spirit Stone is a rectangular brilliant cut yellow diamond of high clarity and intense color, nearly 35 carats. In the Marvel universe, the Mind Stone allows the user to awaken or amplify psionic abilities such as telepathy and telekinesis. In combination with the Power Stone, it can even give access to all ghosts that exist at the same time.

In conjunction with its debut at SDCC, East Continental Gems will also release a limited-edition Reality Stone in September 2022 as part of a future collection to be announced at a later date.