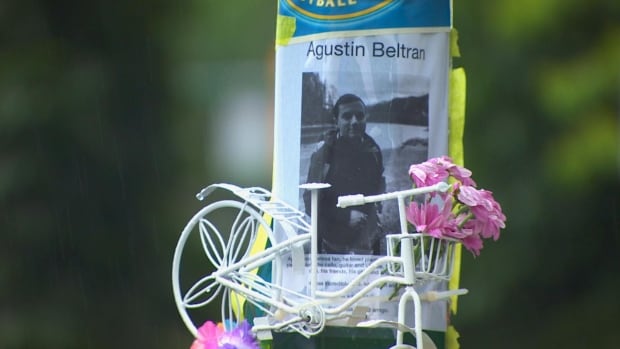 A memorial bike ride was held in downtown Vancouver on Sunday to honor a beloved cyclist who died in a crash in the West End last week.

Agustín Beltrán, 28, was killed in a collision with a dump truck at the intersection of Hornby Street and Pacific Boulevard on Wednesday.

Beltrán was a freshman doctoral student at the University of British Columbia. He studied environmental and applied microeconomics, according to the university’s website.

The memorial ride on Sunday started outside the Vancouver Art Gallery and headed to the site of the fatal collision.

Cyclist Dara Poon said the city’s cycling community has been reeling since the crash.

She said the intersection where Beltrán died is “quite complex” for cyclists, despite having a bike path separated from traffic.

Author and West End resident James Glave also attended the memorial. The daily cyclist said many of the deaths of his peers in the city are preventable.

“We came out today to celebrate the lives lost in the past week, but in a sense also to recognize that we still have a long way to go to provide safe infrastructure for people who are vulnerable road users,” he said. he.

“Everyone outside of a vehicle takes their life in much of this city, all the time, every day — and there’s no way it should be.”

The director of UBC’s Vancouver School of Economics released a statement Thursday in mourning the loss of Beltrán.

“We are shocked and devastated by the death of Agustín,” wrote Patrick Francois. “This is a huge loss to the UBC community and our close-knit PhD program.”

Another commemorative bike ride for Beltrán took place this weekend in Mexico City, where he earned his previous degrees.