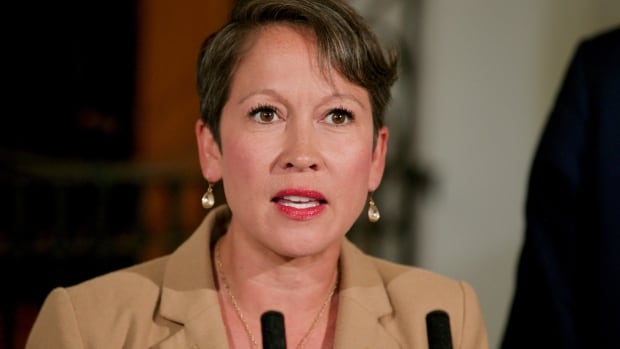 After two weeks of criticism, Tourism Secretary Melanie Mark tried to convince a skeptical public of plans to rebuild the Royal BC Museum on Wednesday by outlining the business case for the $789 million project.

The province released over 2,300 partially redacted pages of reports and attachments in support of the controversial project and held a 90-minute technical briefing with journalists ahead of the minister’s press conference in an effort to explain the need to completely rebuild the museum.

Mark described the museum in its current state as “non-functional”, explaining that it is seismically unsafe, full of hazardous materials such as asbestos and lead, inaccessible to people with disabilities and structurally insufficient to maintain the current collection or large exhibits hold.

“I understand this investment is a lot of money, but we won’t just shelve this project. We won’t risk erasing our collective history,” said Mark.

She said the business case shows that rebuilding the facility is cheaper than upgrading or repairing the current building.

“There’s a risk of doing nothing,” Mark said.

The project has been a source of intense controversy since Prime Minister John Horgan announced it at a press conference earlier this monthjoking that it was “mammoth” news for the county.

New BC Liberal Leader Kevin Falcon has also made the museum an important topic of conversation. Opposition members have mocked the plan dozens of times as a “vanity project” in the legislature.

‘We try to invest in the future’

“The announcement didn’t come as I had hoped,” she said.

She also tried to shift political football back to the opposition, noting that the previous Liberal government was aware of the museum’s earthquake problems in 2018.

Mark argued that investing hundreds of millions of dollars in the museum does not mean that the government is unable to pay for other critical projects, such as hospital upgrades and seismic work in schools.

“We’re not trying to take anything. We’re trying to invest in the future,” she said.

She added that the project would create jobs and ultimately bring in more tourist dollars.

The reconstruction project will take more than seven years to complete and the current museum is to be closed from September this year until 2030.

Reporters learned on Wednesday that it would take 2½ years for staff to properly clean, package and move the museum’s seven million artifacts so construction can begin.

Two years ago, it was announced that much of the collection would be housed in a satellite facility in the neighboring community of Colwood for research and storage with a budget of $224 million. The building should be ready in 2025.

During Wednesday’s technical briefing, reporters learned that infrastructure problems and lack of space had become major problems at the museum. For example, officials said BC had recently been unable to host the Royal Ontario Museum’s famous blue whale exhibit because all of the elevators were too small to fit inside the skull.

The condition of the building has also hindered the repatriation of artifacts to the indigenous communities from which they were taken.

Officials revealed that the planned repatriation of one totem pole had been postponed because walls and windows had to be removed and a crane deployed to move the item. Meanwhile, there is often not enough space in the building to organize the appropriate repatriation ceremonies.

The county also shared photos of overcrowded storage areas, structural issues related to the age of the building, and damage to the building caused by flooding in recent years.

The details presented on Wednesday failed to convince the opposition. The BC Liberals described the business case as “inconclusive and incomplete” in a written statement, and financial critic Peter Milobar predicted the project would become a “boondoggle.”

“I think the most disturbing part is that a third of the report was redacted,” Milobar told CBC.

“This is important because the government is telling us… we have to trust them on what is now an eight-year project and nearly a billion dollars.”

Green MLA Adam Olsen described the rollout of plans for the museum as “a public relations disaster” in a written statement, saying the county has failed to meaningfully engage the public in a process that has been going on for years. seems to be underway.

Olsen, who is a member of Tsartlip First Nation, also argued that the government has done little to prove how a new building will help indigenous people in BC

“The BC NDP designed the new museum as an act of reconciliation and an opportunity for greater item repatriation, but today’s business case clearly points to the construction of a larger and ‘modernized’ building to house our sacred items and ancestral relics as the primary target,” he said.

“We don’t need a new building to house items they plan to return to Indigenous people — we just need the museum to prioritize their return.”