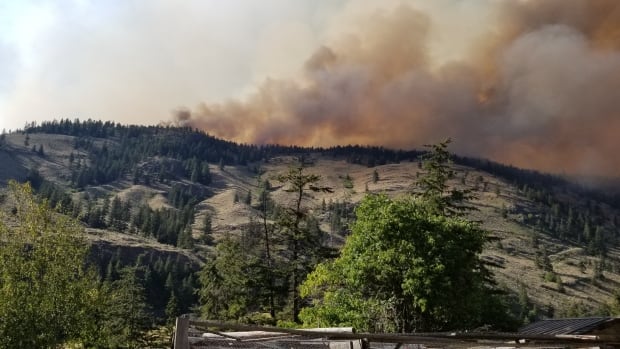 Evacuation orders have now been issued for 324 properties in the southern interior of BC following the major increase in the Keremeos Creek wildfire over the past day.

Monday at 2:30 p.m. PT, the blaze southwest of Penticton was estimated at 22.6 square miles, more than five times the estimate given a day earlier.

“It’s not a very predictable wildfire. It’s a wildfire that got out of hand,” BC Wildfire Service spokesman Bryan Zandberg told reporters at a news conference.

The Okanagan-Similkameen Regional District (RDOS) also issued a new evacuation order Monday afternoon, for about 50 properties along Sheep Creek Road South and Highway 3A, and north of Olalla.

In all, the wildfire has so far forced the evacuation of 324 properties, and another 438 are on evacuation alert, meaning they must be ready to leave as soon as possible, according to RDOS information officer Erick Thompson.

Zandberg said the activity on the fire has been “very vigorous” over the past 24 hours. Firefighters have benefited from a temperature reversal in the mornings, which keeps smoke low to the ground and limits oxygen to the fire, but tends to pick up in the afternoon, allowing the fire to grow.

“We’re really ramping up staff here,” he said. “We are definitely mobilizing to be as aggressive as possible.”

He also noted that while BC saw a late start to the wildfire season, there has been significant drying of vegetation in the southern interior in recent weeks, conducive to fires.

The cause of the Keremeos Creek bushfire is still under investigation.

Earlier Monday, RCMP officers went door-to-door in the resort community of Apex Mountain Village, where a an evacuation order was issued for more than 200 homes. Dozens of other properties in Apex Mountain are on evacuation alert also.

The ski resort has used its snow cannons to blow fog on buildings in an effort to protect them from the blaze.

#KeremeosCreekWildfire watching helicopters fill their buckets with water is very impressive… at the age of 3 or thirty something years old pic.twitter.com/L21Q4S1d2W

James Shalman, the resort’s general manager, estimates that “a few hundred” people live in the village during the summer months.

“Right now it looks good, but you never know if the wind will turn and Mother Nature will turn things aside,” he said.

Thompson said people who need to leave their homes can enroll in the provincial Evacuee Registration and Assistance program for lodging if they can’t stay with family or friends.

A second major wildfire in the interior, the Nohomin Creek fire northwest of Lytton, it held steady at about 31 square miles Monday afternoon.

Conditions on the fire remained hot and dry on Sunday, according to the BC Wildfire Service, but fire activity in the afternoon did not increase as much as on previous days.

Meanwhile, a new wildfire is expected to affect traffic on the Trans-Canada Highway 7.5 kilometers west of Kamloops.

The wildfire department says the Polygon Pond wildfire is only about an acre (10,000 square meters) in size, but is “highly visible” from Highway 1 and Highway 5 and in and around Kamloops.

Firefighters from Kamloops and the surrounding area are assisting wildfire crews, the service says, while a helicopter is on the scene and air tankers are en route.

The Wildfire Service recommends checking DriveBC for the latest updates on any impact on Highway 1.

The wildfire department also announced Monday that a campfire ban will soon be in effect for the Kamloops Fire Center, which covers both the Keremeos Creek and Nohomin Creek fires.

From 12 noon on Thursday, all campfires, fireworks, sky lanterns, burning barrels, outdoor fireplaces and tiki torches are banned in the region. The restrictions will remain in effect until October 15.

A statement announcing the ban said fire hazard ratings across the fire center are currently “high” or “extreme” due to the hot and dry weather.