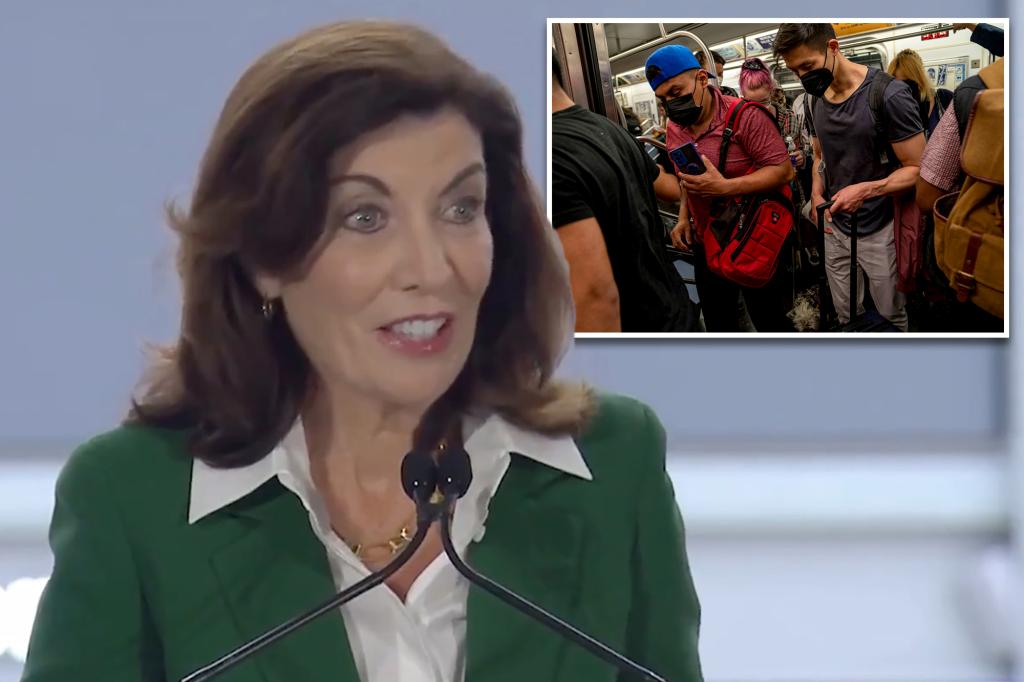 The MTA quietly kept track of whether riders wear masks on the subway, even when Governor Kathy Hochul doubled her mask mandate for public transit a few weeks ago.

The agency hasn’t conducted a straphanger mask investigation since April, and after being asked by The Post on Tuesday, it updated its site to say that officials “no longer keep track of recurring compliance statistics.”

“The subways are a public space used by millions of people every day, of whom everyone can judge” [the] level of compliance with the ongoing mask requirement,” MTA Representative Tim Minton said in an email.

While the federal government stopped enforcing the face-covering requirement for airports, planes and other modes of transportation in April, Hochul has opted to keep it for public transportation in the Empire State.

Mask wearing — which has been mandatory on MTA trains and buses since April 2020 — had fallen sharply by the time the agency stopped its surveys. In April 2021, about nine in ten metro travelers were found to be wearing a correct mask, but that number had fallen to 64% in the same month this year.

An official said the authority has reassigned its mask investigators “to help collect passenger data on buses and trains.”

“This indicates that the MTA has decided that wearing masks is not important,” said Joe Rappaport of the Brooklyn Center for the Independence of the Disabled.

“This kind of measurement makes sense. People can look at it and judge whether they think it’s safe to ride the subway or buses,” he said. “There are a lot of immunocompromised people in New York City who still need to get around the city.”

Lisa Daglian, of the MTA’s Permanent Citizens Advisory Committee, said that for those who feel strongly about wearing masks, it “could be a determining factor getting back on board.”

According to MTA customer surveys, concerns about COVID still remain a roadblock for some New Yorkers returning to transit, but crime, safety and service quality rank higher.

When asked if he was concerned about wearing a mask, MTA CEO Janno Lieber said in April that his team was focused on “other issues”. He insisted mask use remained high during the busy commute hours.

“It’s not a big drama on our public transport system,” Lieber said at the time. “There are other things that I think are more important to New Yorkers as they use public transit and go back to work.”

Other transit players are stricter against the mask rule.

The union representing Metro-North Railroad conductors recently called on the MTA to remove the requirement entirely, arguing it is “unenforceable” and poses a safety risk to transit workers.

Commuter rail proponents, meanwhile, have asked Metro-North and the Long Island Railroad to make “mask-required” cars similar to “quiet cars” on some routes.

Disgraced ex-governor. Andrew Cuomo was fined $50 in September 2020 for mask non-compliance — but few tickets have been issued, according to MTA stats.

Riders Alliance spokesman Danny Pearlstein said the MTA has made a wise decision to shift resources from measuring adherence to mask mandates and recommendations. The issue of mask use is not limited to transit, he noted.

“It’s not so much that the MTA doesn’t care, I don’t think, but that they recognize there’s only so much they can do,” Pearlstein said.

“Drawing attention to this when there’s so little impact they can have is not a good use of resources given all of their other priorities.”

A federal judge on April 19 invalidated the TSA’s mask mandate, finding that the Centers for Disease Control and Prevention exceeded its authority.

During a July 20 briefing on COVID-19 and the monkey pox outbreak, Hochul indicated that she plans to maintain the blanket covering requirement on New York’s public transportation system for the time being.

“I think it gives people that sense of security. We’re trying very hard to encourage people to go back to work, use the subway, but they need to feel safe,” she said.