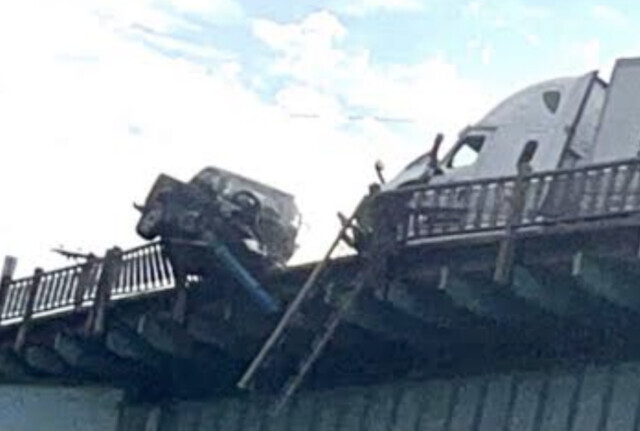 A multi-vehicle accident involving a pickup truck and a semi-collision on the RW Bruhn bridge in Sicamous on Thursday sent eight people to hospital.

The crash shattered the bridge railing, leaving the badly damaged truck in a precarious position over the Sicamous Narrows.

Due to the collision between three vehicles, Highway 1 was closed for several hours and an air ambulance was called to the scene to transport the worst injured.

BC Emergency Health Services arrived at the scene at 5:44 p.m. with five ground ambulances, the air ambulance and a paramedic supervisor.

One patient was rushed to hospital in critical condition by air ambulance.

Seven other patients were taken to hospital in stable condition.

RCMP and the Sicamous Fire Department also responded to the incident.

The speed limit on site has been lowered to 30 km/h until further notice, DriveBC reports.