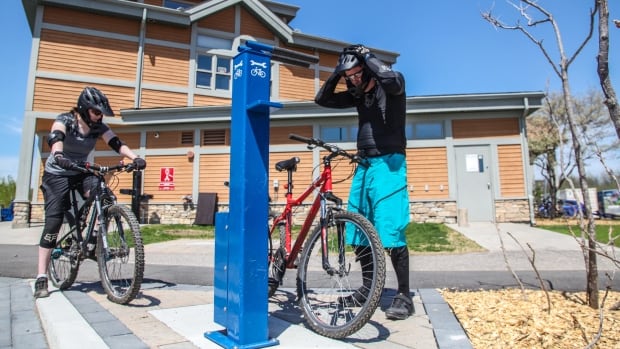 After years of warning visitors to Gatineau Park to stay on the trail, the National Capital Commission (NCC) has begun converting many so-called rogue hiking and biking trails into legitimate trails.

Beyond the 200 miles of official forest trails maintained by the NCC, park administrators estimate there are over 300 miles of additional unofficial trails.

The number of those trails has skyrocketed in the era of mobile mapping apps like AllTrails, and starting in 2017, the NCC began the “if you can’t beat them, join them” approach.

Last November, a hiker was injured on a bluff and had to be rescued by firefighters from several municipalities bordering the park.

Not long after, another visitor ventured off a designated trail, got lost, and had to be rescued.

“There’s a chance of falling, so it’s always a difficult procedure.”

Even if a lost hiker’s phone does have reception, just sending the coordinates to rescuers won’t help if there’s no record of the path the visitor followed in their predicament, Ethier said.

Pierre-Olivier Dorego, outdoor recreation manager for Gatineau Park, admitted that the proliferation of new trails through the forest by map app users has given park managers new headaches.

Still, planners have tried to take a philosophical approach.

“We must remember that these trails are there for a reason,” said Dorego, who added DIY trails that often connected residential areas to the park, or offered a recreational experience not available anywhere else.

As of 2017, the NCC has held public consultations with users about which unofficial routes deserved to be made official.

Hang gliders, horse riders, snowmobiles, hikers, cyclists and other groups weighed in in a series of public gatherings.

In the end, about 100 kilometers of the 330 kilometers of rogue routes were accepted, often with modifications, with the do-it-yourself routes being judged for their recreational value and environmental impact.

Dorego said some proposed routes should be banned immediately as they set a course through sensitive and legally protected habitats for animals such as peregrine falcons, western chorus frogs or American butternut.

Others caused unacceptable fragmentation in the range of larger mammals such as deer.

But in many other cases, the park has let users take the lead.

Pierre-Olivier Dorego, outdoor recreation manager for Gatineau Park, says the National Capital Commission will convert some of the park’s many unofficial trails into legitimate trails, as ad hoc trails pose both safety and environmental concerns.

Volunteers have donated thousands of hours of their time to trim, prune and blow the trails that get the NCC kinked.

Dorego estimates that 100 kilometers of “crowdsourced” routes will appear on official NCC maps by the summer of 2024.

It’s music to the ears of Patrick Hannan, who confessed to riding his mountain bike on “unofficial trails” and regularly clashing with hikers who disagreed with him, including on outdoor areas.

“Making them official lets them know it’s a shared track. I get fewer insults or comments,” he said.