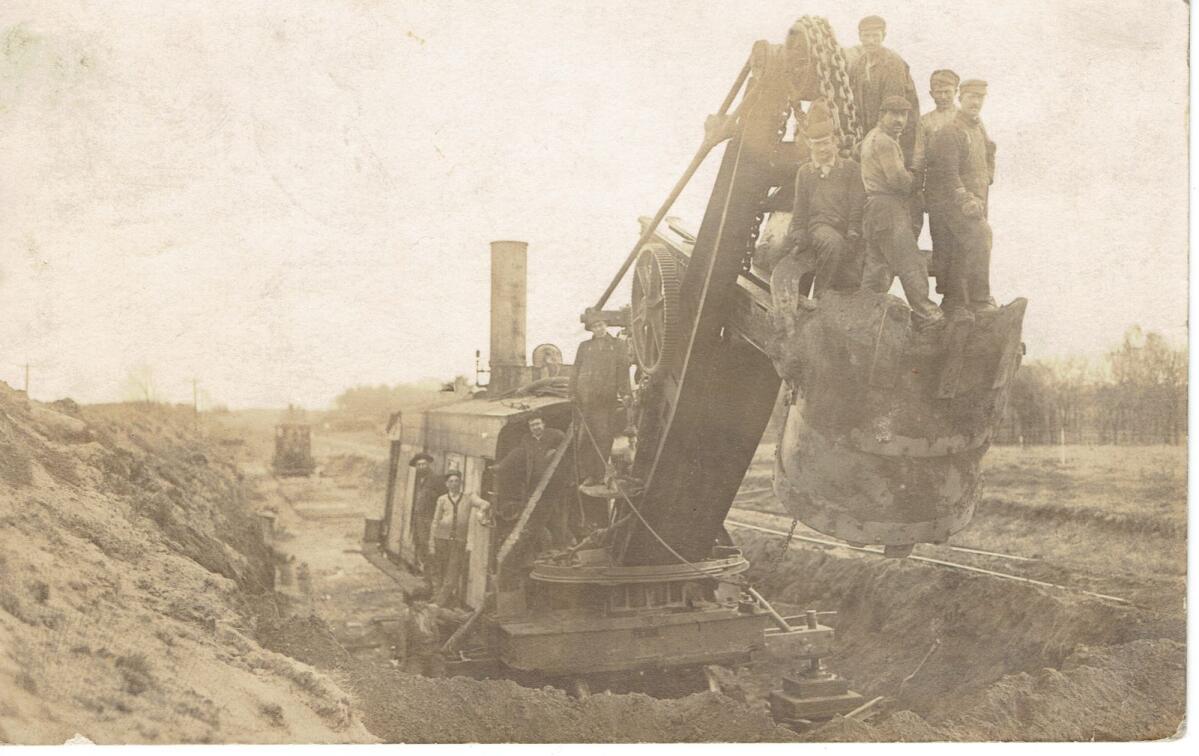 For a brief moment of brilliance, a railway stretched from Anamosa to Quasqueton.

But just as quickly as cities sprang up along the Chicago Anamosa & Northern Railway in the early 1900s, the communities of Jackson, Anderson, Robinson, and Kiene disappeared when the CAN couldn’t keep going.

At a time when the government normally paid for railroads, a wealthy Dubuque family funded this railroad, which cost about $500,000 to build and carried people, grain, and freight. Along the way, farmers contributed money to build cattle stations.

Whether it was due to poor money management among the founding family members, the advent of automobiles, or the fact that the railroad was only 35.3 miles long and didn’t cross the Wapsipinicon River to connect to a town, the CAN only ran from 1904 to 1915.

In 1917, every bit of it was torn up and sent to Europe to support the Allies’ efforts during World War I.

With each passing year, CAN’s history also threatened to disappear, but thanks to tireless research by Deb Crawford, 61, at the end of Quasqueton, and the writing of Gary Holzinger, 78, of Stone City, near the Anamosa beginning of the line, the CAN can live on.

After about a year and a half of studying photos, newspaper clippings and other documents, the new line ending “Chicago, Anamosa & Northern Railway: The Wapsie Valley Route” has been published by the Quasqueton Area Historical Society.

Packed with 120 photos and maps, the 117-page book has 500 copies hot off the press and will debut at Quasqueton’s American Legion Hall Sunday at 1 p.m.

It will continue throughout the summer, with signings and presentations in Coggon, Anamosa and Scotch Grove. Price tag is $25. The Quasqueton and Coggon Historical Societies keep the proceeds from the books they sell at their locations.

Crawford, treasurer of the Quasqueton Historical Society, doesn’t expect either group to get rich from the sale. She said years of planning and “thrifty” savings enabled the Quasqueton organization to fund the project, and she and Holzinger volunteered their time and energy. All bills are not yet in, so she does not know the final costs.

“The main goal was to preserve history,” Crawford said. “It’s not about profit, it’s about preserving the history of the railway. … And if we don’t make money, we don’t make money. We would like to break even, but you know how that goes.”

Part of the railway’s right-of-way runs through the Crawford site, a few miles outside Quasqueton, and many landowners along the entire route have returned their farmland to farmland. All that remains after the railroad’s demolition is a series of gate posts cemented into the ground to anchor fences along the tracks.

“The whole railway was shipped to England – the rails, the cars, the engine and the bridges – they pulled the bridges and sent them in,” Crawford said.

In its heyday, four passenger cars—two northbound and two southbound—carried people, luggage and merchandise, with tickets ranging from 15 to 25 cents.

“They had excursions for everything,” Holzinger said, from taking people to the funfair or opera house in Anamosa, to any event or convention in the area. “The CAN was really good marketing for that sort of thing, to get people to drive.”

A railroad enthusiast, this is the second book he’s written, and he even has an orange Milwaukee Road caboose that he bought, restored, and put in his front yard.

Crawford and Holzinger approached their work the same way: by creating a timeline.

“We started with our files — the stuff people had given us over the years,” Crawford said. “That gives you a timeline for dates and locations. And from there you work backwards. We know that the train arrived in the city on September 2, 1912.

“So then from September you look every way to get the Quasqueton part. And then, if you link newspaper articles, you come up with relative time frames, where they were in May in the Robinson area, which, by the way, is no longer there. It’s a ghost town,” she noted.

“You have to work from what you know to what you have learned.”

Holzinger said he always tries to create a timeline, connect different events, and start building a storyline from there.

“That’s where Deb came in,” he said. “She found nit-picking that I never thought anyone would write about.”

Crawford said she learned a lot as she collected newspaper archives as well as documents and everything she could find at several history centers and historical societies in the area, including the State Historical Society of Iowa in Iowa City. She has not tried to track down the Dubuque family as most of them have moved and she is not sure if there are any descendants in the area.

Technology was both a boon and a challenge, and there was no way to do generic searches. The name of the railroad had several variations, including CAN and CAN spelling mistakes and also incorrect terminology got bogged down in the process. She also made many field trips to locations and asked people to look for pictures or memorabilia in their homes. That prompted responses from Virginia, New York, Wisconsin.

“It was thousands and thousands of hours. Then I would download those articles and label them,” she said, citing that it might have been just hundreds of hours, ultimately resulting in more than 1,200 newspaper clippings to organize.

“This was very difficult, yet very rewarding,” she said, “because if you found something, it was just amazing.”

Citizens meet the construction train on Quasqueton’s southeastern city limits on September 2, 1912. Even the city’s concert orchestra joined in the celebration, which attracted all ages, from babies in prams to the elderly, as well as a few dogs and horses. The Chicago Anamosa & Northern Railway stretched from Anamosa to Quasqueton and was in operation from 1904 to 1915. Known as the CAN, its history is documented in the new book, “Chicago, Anamosa & Northern Railway: The Wapsie Valley Route. ” (Courtesy of the Quasqueton Area Historical Society)