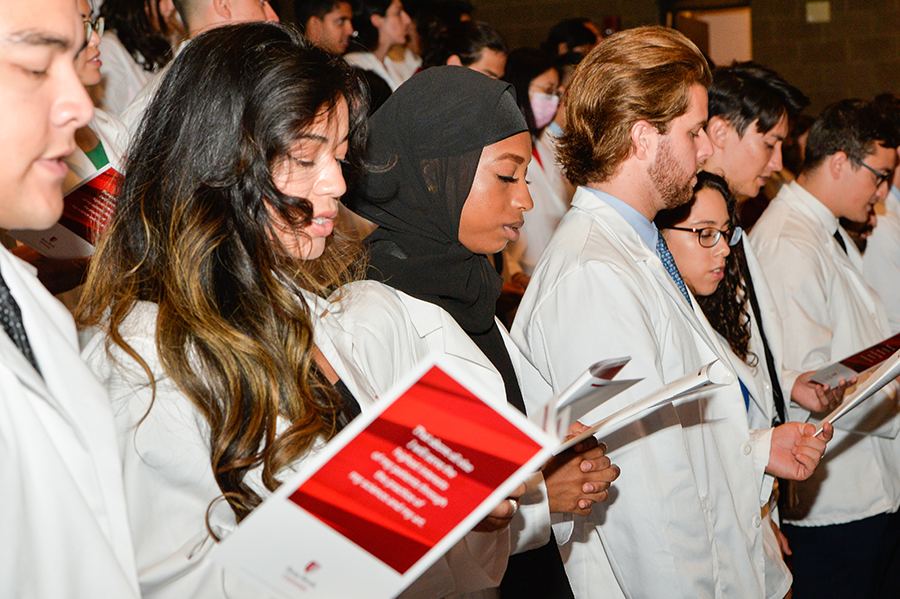 STony BROOK, NY, August 16, 2022 – The 137 who are now new students at the Renaissance School of Medicine (RSOM) at Stony Brook University took their first official step to become doctors at the White Coat Ceremony, an annual RSOM tradition since 1998. August 14 at the Staller Center showed the students receiving and wearing their first “white coats” from the doctor and taking the Hippocratic Oath for the first time.

The incoming students are entering healthcare at a critical time and changing the times in medicine as the global pandemic has ushered in new infection control practices, telemedicine practices have become commonplace, other technologies in medicine are taking diagnostic and treatment capabilities to the next level, and the need for doctors and specialists continues to increase with the aging of the population in many areas around the world.

William Wertheim, MD, interim dean, welcomed the new class whom he described as a talented, diverse, and highly select group. He emphasized that professionalism, compassion for patients and lifelong learning will be some of the most important aspects for a successful medical career.

Collectively, the incoming class received their undergraduate degrees from 67 different universities or colleges. Stony Brook University had the highest school representation as 25 students received their undergraduate degrees from Stony Brook. These include individuals such as Sadé Taylor, a native of Brooklyn, NY, who completed her BS in health sciences and her MS in physiology and biophysics at Stony Brook; and Brigitte Maczaj Cox, who studied anthropology at Stony Brook and whose mother is an RSOM alumnus.

While the class is made up of new students from across the country — coming from a total of 13 states — New York State remains dominant. One hundred (73 percent) of the students are from New York – 43 of them from Long Island, 32 from New York City and 25 from the state.

One student, Erin Crawford, was a cardiology nurse at Northwestern Medicine in Chicago for seven years before the urge to become a doctor took hold. After completing a post-baccalaureate program and assisting in clinical research at Northwestern, she was confident that medicine was for her.

“I am proud to have a nursing background and look forward to seeing how this shapes my perspective and relationships as a physician,” says Crawford. “I’ve always loved cardiology, but I’m looking forward to exploring other clinical areas again and being open to surprises about what might interest me during my medical training,” says Crawford.

A graduate of Cornell University who also received his doctorate in chemistry from the University of Vermont, Nicholas Dodge decided to become a doctor after assisting his mother in Wisconsin as her chronic illness progressed.

“I became very involved in my mother’s care, and the dedication and compassion of her doctors really inspired and moved me,” Dodge says. “After a period of mourning and reflection, I pursued medicine to give back to others as it was given to my family.”

Another Cornell graduate, Richard Rosin, a heavyweight rower and Long Island native, returned to Long Island to teach chemistry at Chaminade High School in Mineola, as well as coach rowing. He embraced the community, joined a volunteer ambulance corps, then worked to become an EMT, all of which led to his quest for medicine.

White Coat Ceremonies remain an initiation ritual and tradition at many established medical schools across the country as the coat is symbolic of medicine which stands for professionalism with scientific excellence and compassionate care.