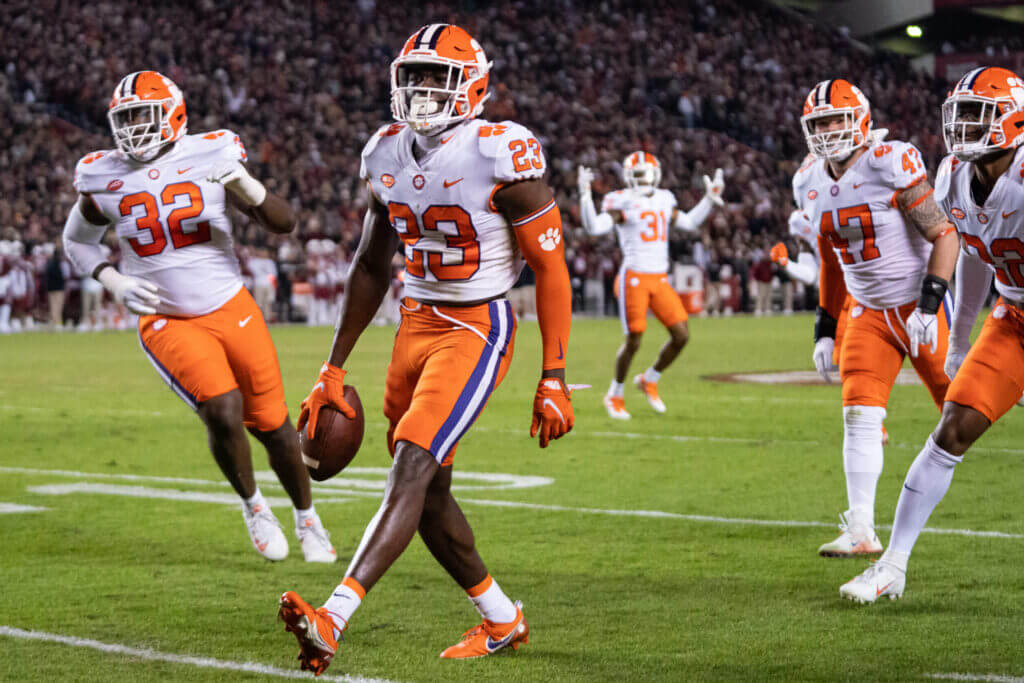 The Giants made a couple of picks in the first round of the NFL Draft on Thursday – Oregon edge rusher Kayvon Thibodeaux at number 5 and Alabama offensive tackle Evan Neal at number 7. Those picks met two big needs, but general manager Joe Schoen has still plenty of work.

The Giants still have seven choices, including three on Friday night: a second round (No. 36) and two third rounds (Nos. 67 and 81). They have four additional choices on Saturday.

Here’s a look at some potential goals with each pick:

1. Andrew Booth Jr., CB, Clemson: The Giants were expected to target two of the three positions in the first round: offensive tackle, edge rusher and cornerback. They went with tackle and edge rusher so the cornerback is a big hole that needs to be filled on day 2. Booth has the man-covering skills to match Defensive Coordinator Don “Wink” Martindale’s system. Washington’s Kyler Gordon is another potential second-round cornerback target.

2. Nakobe Dean, LB, Georgia: Linebacker is an underrated need for the Giants as Blake Martinez has a torn ACL and a bunch of fringe NFL players in the final year of his contract. There is a group of linebackers who could fill that need in the second round, with Dean’s playmaking ability making him a strong fit. Alabama’s Christian Harris could also be a target in the second round.

3. Logan Hall, DL, Houston: The Giants took out Thibodeaux on the first lap, but their pass rush still needs help. The versatile Hall would help with that. The 6-foot-6,283-pounder can be set up in a variety of positions, which is a coveted trait by Martindale.

4. Skyy Moore, WR, West Michigan: It was rumored that the Giants could grab a wide receiver in the first round. Obviously that didn’t happen, but it wouldn’t come as a shock if they tackled the position early on Day 2. Moore broke out last season with 95 catches for 1,292 yards and 10 touchdowns.

5. David Ojabo, Edge, Michigan: This would be a wildcard choice, but worth considering. Ojabo was seen as a first-round talent before tearing his Achilles tendon on Michigan pro day. Even if Ojabo misses his rookie season, the Giants should consider the value of adding an elite talent to a premium position at this stage of the draft.

There is an even bigger potential wildcard: Quarterback. Pitt’s Kenny Pickett was the only QB picked in the first round. It would be a surprise if the Giants drafted a quarterback, but the position surplus could make the 36th pick more attractive in a trade.


Georgia driving James Cook back could be an option on Day 2 for the Giants. (David Rosenblum/Icon Sportswire via Getty Images)

1. Jelani Woods, TE, Virginia: The Giants are completely renewing their room with tight ends. They have some experienced emergency solutions, but they need a long-term solution. The 6-7, 253-pound Woods would be an ideal fit.

2. Alec Pierce, WR, Cincinnati: The Giants will definitely add a wide receiver at some point in the draft. The middle rounds could be the sweet spot if they don’t take one sooner, and a prospect like the 6-3, 211-pound Pierce could be a starting option if the receiver room gets shaken up.

3. James Cook, RB, Georgia: The Bills took running backs in the third round of consecutive drafts when Schoen was their assistant GM. That trend may continue with the Giants as they prepare for life after Saquon Barkley. Cook’s dynamic playing skills match what coach Brian Daboll is looking for in a running back.

4. Nick Cross, S, Maryland: The Giants only have two sureties on the roster, so they need to make an addition in the draft. Cross has the versatility to play in different spots in secondary and could become a solid addition to Xavier McKinney.

5. Luke Fortner, C/G, Kentucky: Even after winning Neal on the first round, the Giants need to bolster the interior of their line. Fortner could be pushing for an entry-level security job as a rookie with a plan to develop into the long-term startup center.

1. Charlie Kolar, TE, State of Iowa: If the Giants don’t get a tight end on Day 2, it looks like they’ll be aiming for it early on Day 3. The 6-7, 252-pound Kolar could step in immediately as a rotary player.

2. Khalil Shakir, WR, Boise State: The Bills often used day 3 picks on wide receivers during Schoen’s time in Buffalo. Schoen would hope Shakir could become the next Gabriel Davis, a 2020 fourth round pick with significant potential.

3. Isaiah Spiller, RB, Texas A&M: Similar to a tight end, the Giants have the idea of ​​running back on Day 3 if they don’t catch one sooner. They need to increase their draft this season while keeping an eye on the future. Spiller has the ability to develop into a three-down back.

4. John Ridgeway, DT, Arkansas: The Giants exercised Dexter Lawrence’s fifth-year option for 2023, while Leonard Williams could be a cap victim next season. Even if both players are retained, the Giants must bolster their defenses. The 6-5, 321-pound Ridgeway could develop into the long-term nose gear.

5. JoJo Domann, LB, Nebraska: Domann has the athleticism that Martindale coves in linebackers. The 6-1, 228-pounder could complement the more physical Martinez inside.

1. Jaylen Watson, CB, Washington State: There are no perfect prospects in this part of the draft, so teams are looking for players with traits that can be developed or a set of skills that will translate to the NFL. The 6-2, 197-pound Watson is the size and height to match Martindale’s schemes.

2. Zach Thom, C/T, Wake Forest: The Giants figure to keep throwing darts at the attack line to build depth. The 6-4, 304-pound Thom has the versatility to serve as backup gear and potentially develop into a take-off center.

3. Percy Butler, Security, Louisiana: The 6-foot, 194-pound Butler ran a 4.34-second 40-yard dash on the combine. That speed should immediately make him an employee of special teams with traits that can be safely developed.

4. Pierre Strong, RB, South Dakota State: Strong’s skills fit well into an outdoor zone running schedule, which is expected to be deployed by Daboll. Strong can be a rotating back with the potential to grow into a third-down back role.

5. Chigoziem Okonkwo, TE, Maryland: Okonkwo’s 4.52-second 40-meter dash was the fastest among the tight ends at the combine. The 6-3, 238-pounder could fill the H-back role in Daboll’s attack.