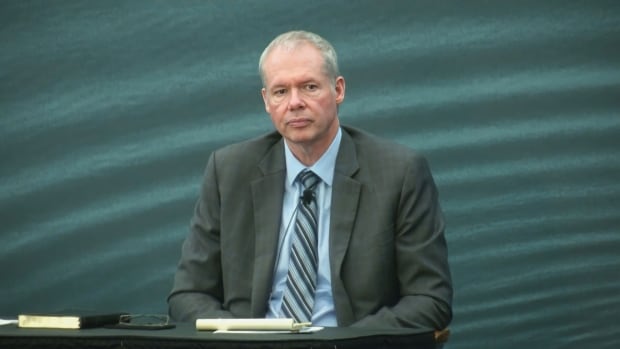 One of Nova Scotia’s top RCMP officers admitted to “missing the point” during early press conferences about the Nova Scotia massacres.

Chef supp. Chris Leather testified at the Mass Casualty Commission, the investigation into the murders of 22 people – including a pregnant woman – on April 18-19, 2020, by a gunman driving a replica police cruiser.

The commission’s counsel, Rachel Young, questioned Leather about the accuracy of some of the information he shared at press conferences and how he was preparing for it.

Leather said he sometimes only had five or six minutes to go through the talking points and often had to rely on his memory to answer questions from reporters.

“That’s what led to some of the misbooking,” he said. “I’ll say it right now. Obviously I’ve been wrong more than a few times.’

At the first press conference on the evening of April 19, Leather said “more than 10 people” had been killed.

But the public inquiry found that an hour before that press conference, Leather had been given information suggesting there were at least 17 victims, and he had known for hours that officers had discovered at least 14 bodies.

“If we think about the now infamous ‘more than’ expression I used, it was done with my intent not to upset/offend/mislead…or more,” he testified on Wednesday. “And by going to the song I chose, it ended up having the opposite effect.”

Leather testified that the information he received before the press conference about the number of victims kept changing.

“I had received information leading up to that particular statement I made that was truthfully over 10, maybe closer to 15, if we’re going to put a mark in the sand. But the problem was, it fluctuated. Depending on who gave me the information, it was 14, 17, back again.”

Leather said he had a “stairwell conversation” with the communications director, Lia Scanlan, and “we agreed we should just break this off, put the number piece aside and go with a number.”

Young asked Leather if he intended to mislead the public or hide information during press conferences.

“Absolutely not. I intended to do the opposite,” he replied.

Young pointed out that in the press conferences on April 19 and 22, as well as in the first tweet sent about the situation, it was described as a “firearms call”.

Asked if that mischaracterized the seriousness of the event, and whether it could confuse or mislead the public about the danger, Leather said, “In hindsight, that’s not the term I would use to describe it.”

A second tweet dated April 19 described the situation as an active gunman — which Leather agreed was more accurate.

Young also asked for statements at press conferences and in press releases that the RCMP had “secured the area” while the perpetrator was still at large. Leather said that to him, “secured” means officers on the ground, and that “secure” would have been a more appropriate description.

During Leather’s testimony, he was asked about a police security bulletin distributed by the Truro Police Department to police stations in 2011 about a tip about the gunman, Gabriel Wortman, who warned that he “wants to kill a cop” and that he will at least owned one gun.

The bulletin was brought to the RCMP’s attention on April 19, 2020, when an Amherst Police Service officer recognized the gunman’s name and dug up the 2011 message in his email. The committee has previously heard that the document was in a folder on a shared drive.

Leather said the message was not available to members in a searchable database, and that it wasn’t even a final document, but rather in fragments “in this kind of jumbled, unofficial format.”

The document did not reveal who gave the tip, but Leather said it was of “clear importance” to find out who it was.

“Their information … was relevant to the H-Strong investigation and God knows what else they knew and could add to that criminal investigation,” Leather said.

Young asked Leather about the fact that no RCMP member appears to have interviewed Wortman in the wake of the 2011 bulletin.

“The bulletin itself, given its content, if you didn’t know anything more, certainly begged for further research,” he said. “It only made sense that further research would be done.”

Why the municipal police were not called in

Leder was asked why he enlisted RCMP resources in New Brunswick during the mass casualty event rather than relying on municipal forces in Nova Scotia.

Kentville Police Chief Julie Cecchetto, in her capacity as head of the Nova Scotia Chiefs of Police Association, questioned her colleagues on April 19 about what assistance they can provide the RCMP.

Almost all of them responded with offers from additional agents, but they were not engaged by the RCMP.

Leather said this is due to concerns within the RCMP about interoperability, communication, training and expectations during a long-term major event.

“I think it’s full of risks,” he said. “When they come together to work in a high-risk scenario, if they’re not reading from the same page, if they’re not aligned in their thinking, their training, and how they handle a situation, what a terrible place to put that. experiencing collapse.”

He said the chiefs recently met — in response to truck drivers’ protests — to resolve some of those issues. “We’re coming,” he said. “It’s a work in progress.”

Leather told the committee he is aware of sentiment among some municipal police stations that the RCMP “felt superior.”

He said the leadership changes within the Nova Scotia RCMP — including its imminent move to Ottawa — should help improve relations.

“As sad as I am to leave, I am happy for the person who will come behind me. They will have a clean slate and the chance to work with the city leaders without the baggage we have all carried for the past few years. two years.”