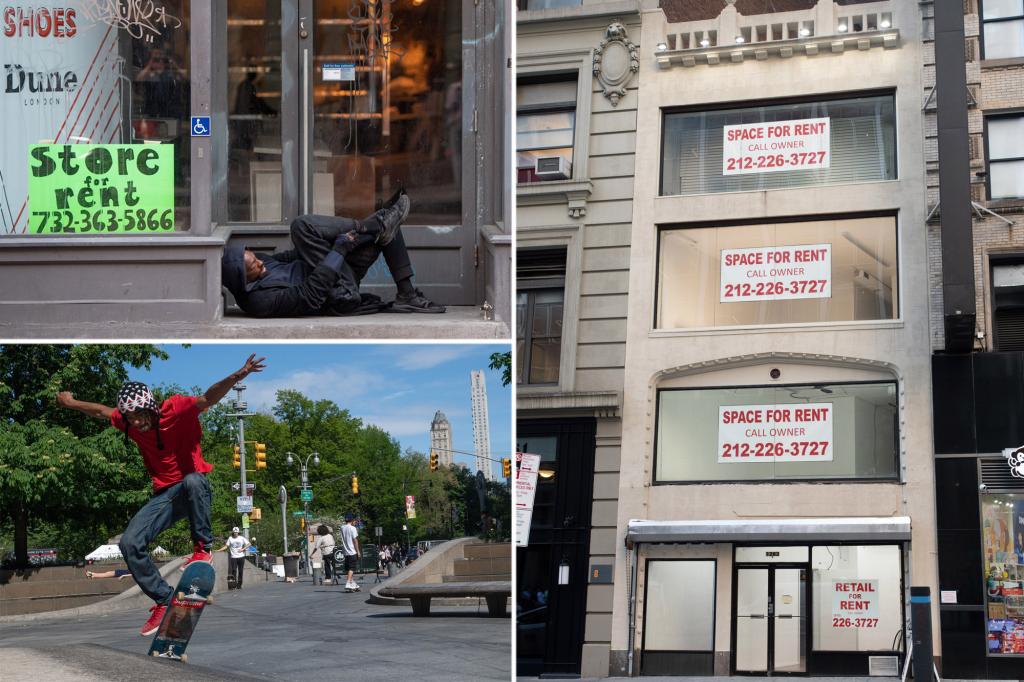 Broadway is the ultimate barometer of New York City’s social, economic, and cultural well-being, not only for its fame around the world, but also for its glorious span – it’s the only street that winds its way through the entire length of Manhattan.

The Post set out Thursday to gauge the city’s health by walking all 22 miles of the storied artery, from the Harlem River in the north to Bowling Green in the south.

We found a staggering number of retail job openings as businesses facing the harsh realities of a historic wave of crime, economic devastation and staggering inflation continue to close.

We also found some optimism.

“Broadway is New York itself,” said Del Acosta, 62, who enjoyed a mid-morning puff at Portes Cigars, near 214th Street in Inwood. “It’s getting back to normal, thank goodness.”

But the new normal, others told us, is part of the problem.

“New York is feeling back, but for the wrong reasons,” said Miguel Sanchez, 56, as he had his car polished at Broadway Bridge Wash and Lube on 220th Street, Manhattan’s northernmost side street. “Too many potholes. Too much crime. Too much weed.”

The shocking number of empty windows is the clearest sign of Broadway’s struggle for normalcy.

We counted more than 100 shuttered buildings and “for rent” signs the length of Broadway, including entire blocks that were empty in trophy districts like NoMad and Tribeca.

According to a report by Cushman & Wakefield, availability in parts of Broadway was a staggering 26 percent in the first quarter of 2022.

“They have been killing business after business during COVID. All that’s left are the shops,” said Jackie Toboroff, a downtown resident and former city councillor, as she stood on a destroyed block across from City Hall. She blamed COVID mismanagement by city leaders and BLM riots for decimating local businesses.

Romantic Depot, an adults-only store on 139th Street, has resorted to public ridicule to thwart the epidemic by posting a “Wall of Shame” with photos of perpetrators caught stealing from “NY’s finest lingerie store.”

The moist smell of weed has replaced roasted nuts and street sausage as the signature aroma of Midtown Manhattan.

The stench of marijuana permeates the air almost the entire length of Broadway. It’s especially sharp from the south of Columbus Circle, where pot sellers compete for a position on the sidewalk with the increasing number of pedestrians. Marijuana is now legal in New York, but smoking joints at home and selling on the street is still against the law.

Police presence is minimal. The Post observed 16 officers patrolling the entire island on Broadway, half of them in Times Square. The stench of marijuana and the sight of illegal drug sales in the open air were everywhere.

A group of young men sat on Citi Bikes just south of Times Square, constantly checking their phones, alongside another group of men openly selling weed.

“We supply sneakers,” one of the young men on a Citibike grinned.

A potter on the sidewalk sold edibles, loose tops and pre-rolled joints — including giant $20 blunts wrapped in plastic tubes — from a folding table north of Times Square, proudly touting the quality of their products.

The “Super Rats” of Tribeca

Tribeca’s A-list celebrities have been replaced in the past two years with less glamorous residents: giant rats.

“No one lives here anymore. These are our neighbors. This, the super rats,” Toboroff said, pointing to a giant plastic rat trap on the sidewalk beneath an obnoxious yellow “space for rent” sign in a window display on a block of empty Broadway stores between Murray and Warren Street.

“Super rats” that “will survive a nuclear war” exploded in Tribeca, she said, in the wake of the outdoor eateries, an influx of homeless people and the reduced frequency of garbage collection in the city. Trendy Tribeca is now riddled with misery.

“This is just misery. It’s tragic. It’s really tragic,” Toboroff said. “This is a liberal utopia.”

Rain Moises stood on Broadway near the corner of Waverly Place in the East Village with a plastic tube of mace in her left hand, waiting for a bus home to Bay Ridge.

“The city is back and it is dangerous. It’s off the hook,” the woman said. The lifelong New Yorker believes the subways are unsafe for young women and said she was accosted by a homeless man on Broadway a few days ago.

The Post saw about 18 homeless people on the walk, several camped at the entrances of empty Broadway storefronts.

Rising costs are also confusing the residents of the Big Apple.

Jesse Warner was a chef at Brooklyn boite Oxomoco, before pandemic closures took out restaurants while crowded, big-box stores flourished.

Start your day with everything you need to know

“They just paralyzed the industry. It was terrible. No help. All new rules. I didn’t want to go back,” said Warner, who keeps his fingers in the food biz at a Broadway farmers’ market between 115th and 116th Streets.

Twin Donuts on 218th Street, the northernmost eatery on Broadway, closed for the winter after selling coffee and pastries for 60 years.

“It’s sad to see something like that,” said Inwood resident Mark Houle, 66, as he passed the storefront with his empty donut racks in them. He blamed “bad kids” and “too much violence” for the struggles businesses face in NYC.

Still, there is hope for a brighter future for Broadway eateries.

Hostess Monica Cabral greeted guests with her radiant smile from the open-air store of two-week-old vegan eatery Omakaseed in Plant Bar, between 29th and 30th Streets.

Dagon opened on 91st Street and Broadway in February 2021, earning rave reviews from the Post’s Steve Cuozzo as “the city’s best new restaurant to emerge from the pandemic.”

“We have a good feeling about the future,” said Dagon general manager Alon Moskovitch.

Tom’s Restaurant, the Broadway restaurant on 114th Street, made famous by frequent appearances in “Seinfeld”, has slowly recovered.

“We’re not 100 percent back yet, but I have a good feeling about where we are,” said manager Mike Zoulis.

“It’ll never be the same, but it’s better than it was,” said Warner, the former chef, as he tossed the locally grown produce at the gates of Columbia. “You still feel that level of trepidation from people.”

The return of entertainment

Signs on Broadway indicate that the city’s entertainment industry is storming back.

“We worked every day. We now have 84 shows, more than ever before,” said an IATSE Local 52 electrician, standing in line at a catering truck on the set of the new Apple TV production ‘Improbable Valentine’ on the corner of Isham Street in Inwood. .

Keith Fasciani led a team of site scouts on a tour of United Palace, a 3,330-seat theater on 175th Street, announcing a busy schedule of upcoming events, including “lots of work from the Tribeca Film Festival arriving in June,” he said. . pride.

“Times Square is never normal. Normal is boring,” said Tom Harris, president of the Times Square Alliance, as the glittering Crossroads of the World bustles with street life in the afternoon. Pedestrians have returned to strength, he said, with more than 300,000 people per day and nearly equal to pre-pandemic averages.

“It feels the same to me,” said Texas-based Connie Bradley, a frequent NYC visitor making her first return trip since the pandemic.

Jersey City resident Shaheen Bhardwaj welcomed her father Birdie Bhardwaj from India with a stop at the Charging Bull on Wall Street on the south side of Broadway. It was Birdie’s first visit to the Big Apple.

“New York is the most amazing city in the world,” he said after his day of sightseeing, looking at his daughter, “This is my world here.”

BROAD BY THE NUMBERS

$7.61 – price of a gallon of diesel at Shell Station on Broadway at 174th Street, most expensive gallon seen on Broadway

13.4 – north-south longitude of Manhattan, in miles. Broadway is the only road that stretches the entire length of the island.

16 – number of officers the Post saw patrolling Broadway all day.

260 – number of north-south blocks in Manhattan; 220 are numbered, there are about 40 blocks south of Houston Street

37,000 – Steps it took to walk the entire length of Broadway

318,793 – Pedestrians in Times Square on Monday, May 9, the most since the start of the pandemic