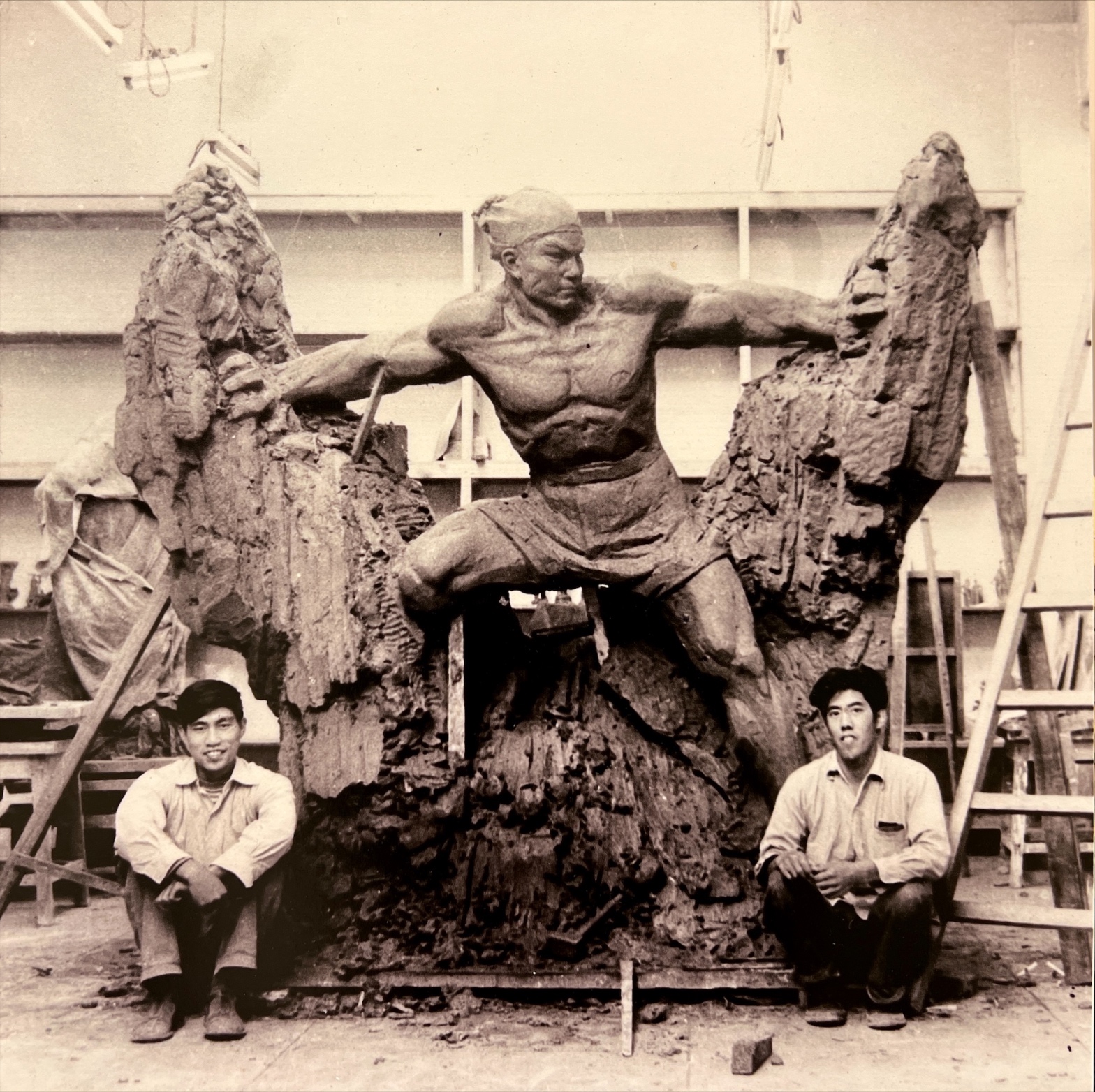 In “Cutting Through Mountains to Bring in Water” (1958), the late sculptor and educator Liu Shiming embodied the powerful spirit of the Chinese Revolution. A bare-chested man straddles the space between two jagged rocks, as if crossing them, but his abstracted lower half seems to materialize from the lowest point of the base. Cast in clay and cast in bronze, the piece served as a study for a larger monument installed in Beijing’s Zhongshan Park, honoring China’s revival from the “century of humiliation.”

During his 84-year life, Liu helped shape a new Chinese cultural image rooted in the contributions and sacrifices of ordinary people. Despite a degenerative leg condition that linked him to crutches in his mid-thirties, the artist continued to lift and shape the heaviest sculpting materials into scenes of deep lightness. Liu’s latest retrospective, simply titled passagesat the Godwin-Ternbach Museum at Queens College, solidifies his legacy as one of China’s first truly modern sculptors.

Liu passed away in 2010, but his family and a foundation to his name have made efforts in recent years to showcase his body of work to a worldwide audience. While he made thousands of sculptures during his lifetime, the 62 pieces in passages provide a well-rounded entry point to its creative and political reach. From his early years working in a socialist realism style to later embracing Modernism and Buddhism, he maintained that simple communal pleasures—such as working together, raising the next generation, and thriving in the community—transcend individual self-interest.

Liu’s early career in the nascent People’s Republic instilled an appreciation for collective identity. While working at the China Sculpture Factory, he contributed reliefs to the People’s Heroes Monument and sculptures to the Workers’ Stadium and People’s Revolution Military Museum. The miniature works from this time are undoubtedly inspired by the Soviets and his own experience as a farm worker. “Measuring Land” (1950), his award-winning graduation piece from the Central Academy of Fine Arts, was inspired by his own observations during the land reforms of 1949. And “Discharge from the Hospital” (1954) features a doctor who bears a striking resemblance with Vladimir Lenin alongside a new mother and child.

During the Cultural Revolution, Liu was one of several artists sent to the outer provinces of Henan, Baoding, and Hebei to assess the devotion of the rural classes to Maoist ideals. The captivating yet candid “Re-Education” (1980) explores these tensions. An intellectual and a farmer seem to be in a tiny hut together, yet there is a considerable distance between them. Others are more vernacular, telling farmers’ lifestyles from his own experience, such as “Wooden Raft on the Yangtze River” (1989) and “Seated Woman Holding an Apple” (c. 1980s).

In another piece from this era, “Man with a Boat and Cormorants” (1986), a tall, simply dressed fisherman wears two long boxes around his neck, into which the three perched fishing birds drop their catches. As with ‘Cutting Through Mountains’, the man’s legs are obscured by an abstracted base, while his cap and mustache again bear a remarkable resemblance to Lenin. One of Liu’s most fully realized works on display, the piece speaks to his growing reputation as a people’s sculptor.

Perhaps the strongest aspect of passages is his keen understanding of Chinese politics, devoid of the usual Western chauvinism. In “Guangling San” (1986), the title of which refers to an old melody, an abstracted face grows on top of a black mountain. Liu mourns the government execution of his neighbor Ji Kang, who played the zither, but instead of using it against the Chinese Communist Party (CCP) as a whole, the title card only emphasizes how contradictory Liu must have felt.

Similarly, the emotional “Looking at Each Other Through the Cage” (1990) shows two sparrows facing each other, one in a cage of crooked black wires. Liu believed that sparrows and humans have a close relationship; as such, his decision to paint their plumes red and leave the piece raw increases their fragility. His critique of the Cultural Revolution was thus not fatalistic but allegorical; he made careful interventions without fully condemning the CCP.

Over time, Liu began to incorporate ancient techniques and symbolism of the Han Dynasty while working as a curator at the National Museum of China, as well as aesthetic elements from European modernists such as Henri Matisse. A lone woman lying in prayer seems to have few distinctive features, but other standing nudes show a masterful attention to detail. Many of these works were produced during the period of increased diplomatic relations between China and the West, demonstrating how art practices shift with geopolitics.

His later work, made while caring for his young grandson Mengmeng, focuses on the upbringing process, as well as his own self-reflection. Married into a family, Liu dutifully assumed the role of stepfather, and his devotion to them unfolds in a series of dignified bronze portraits of his wife, Hao Shuyuan, and Mengmeng. In a 1989 self-portrait made of wood, his slightly boxy figure clamps a stool flat against his side. The use of a lighter material here raises interesting questions about his own self-image, especially since he made very few self-portraits. Perhaps he saw his own body as temporary compared to the memories preserved in bronze.

Many of the works in passages were cast at a later date, making their origin somewhat difficult to establish. The museum chose to date them by casting, which is helpful for the specific objects on display, but somewhat obscures Liu’s creative timeline. In addition, the drawings included here are carbon copies sent by the foundation, which made me wonder about the status of the originals. But to be sure, the sketches of ordinary people included here, brought to life with just a few lines, give deeper context to Liu’s mastery of the human form.

Perhaps the most moving work of all, however, is a small portrait that can be somewhat autobiographical. Created shortly after the death of his mentor, Jiang Feng, “Someone Who Wants to Fly” (1982) portrays a man stretching out his arms, which are decorated with fake wings. Despite stones carved into the base, his legs and feet are again not fully formed. Is this dreamer still standing on solid ground, or is he actually taking flight? For an artist who has become immobile for much of his life, Liu’s centerpiece – presented at the entrance to the gallery – speaks of his ability to traverse the world through his art.