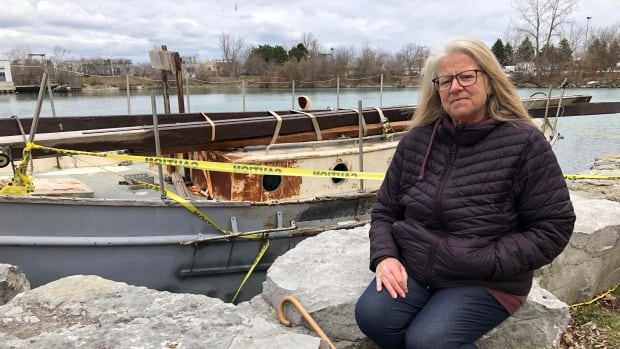 The city of Toronto is looking for ways to combat what some say is an increasingly common eyesore: wrecked or abandoned boats that sometimes leak pollutants into Lake Ontario.

The council voted last month to ask the federal government for more power so it can get those boats out of the water faster — something it doesn’t now have the power to do.

Cori Campbell, who describes herself as a daily visitor to Bluffer’s Park in Scarborough, calls the problem “heartbreaking.” She says she has seen three abandoned boats there so far this year and wonders why authorities are taking so long to clean them up.

“Why are they waiting to sink?” asked an annoyed Campbell.

“This year was the most problematic. I don’t know of any that have been left here for this year. I’ve never seen it like this.”

Only the Canadian Coast Guard, Transport Canada or the owner of a vessel can legally remove a nuisance boat from the water’s edge. But councilors and some park users complain that federal authorities are taking too long to remove abandoned ships, some of which have leaked oil, gas or other pollutants into the lake. Two abandoned boats have sunk in the past year – one at Bluffer’s Park in Coun. Gary Crawford’s ward, the other in Coun. Mark Grimes’ west-end department.

Grimes and Crawford filed a motion last month calling on city officials to look for ways to expedite the moves, even allowing the city to intervene directly without waiting for federal agencies.

Robert Brooks, director of the Canadian Coast Guard’s Vessels of Concern program, says his organization tracks more than 2,000 problem vessels across the country. The Coast Guard sorts those boats and, in conjunction with Transport Canada, acts quickly to get the most dangerous boats out of the water, he says.

A total of 41 dangerous or abandoned vessels have been identified along the western side of Lake Ontario, from Pickering to St. Catharines. Two of these have since been removed, either by the Coast Guard or by the owner.

“We can’t be in all places at once,” Brooks told CBC News. “We protect the areas of highest risk first.”

Brooks says the power to remove nuisance or dangerous boats is relatively new: The Wrecked, Abandoned or Hazardous Vessels Act only came into effect in 2019, so it’s hard to say if the problem is growing.

But, he says, the Coast Guard expects to see more abandoned ships in the coming years, partly due to the pandemic.

“The financial crisis we are in can make ship ownership a challenge,” he said. “It can be an expensive business to be in, or a hobby to have.”

Brooks says the Coast Guard also expects climate change to exacerbate the problem with “more frequent storms” and “more severe weather conditions,” leading to “an increase in ships drifting, detaching from berths and detaching from docks.”

He says people who abandon their craft could face severe penalties if caught — up to six months in prison and fines of up to $25,000.

Once a boat is identified as abandoned, the Coast Guard decides how urgent the removal is, Brooks says. If the ship is unsafe – for example due to leaking pollutants – the Coast Guard sends an emergency team to remove it. Otherwise, Transport Canada is responsible for its disposal.

But Grimes and Crawford say the process is taking too long.

“It’s also very frustrating and frustrating for the residents,” Crawford said. “I get a lot of calls from some residents saying they see these boats there every week, month after month,” he told CBC News.

“But again, how do you get them out in a reasonable amount of time?”

In a written statement, Grimes said he also believes the city should speed up the process.

“If there’s a way the city can help get these boats out before they sink, and before they become an environmental disaster, I think we should look into that,” Grimes said.

Brooks says it may take time for federal authorities to locate a boat’s owner before removing it. But he says he welcomes any help from the city to expedite the moves.

“I think our best strategy is to work with those closest to the challenges and combine resources where we can,” he said.

Meanwhile, Campbell says she believes people are using the public boat launch and docks of Bluffer’s Park as a cheap landfill.

“People can come here and leave boats under the cover of darkness,” she said.

If it’s a shipwreck, it’s going to cost them to take it to a landfill.”