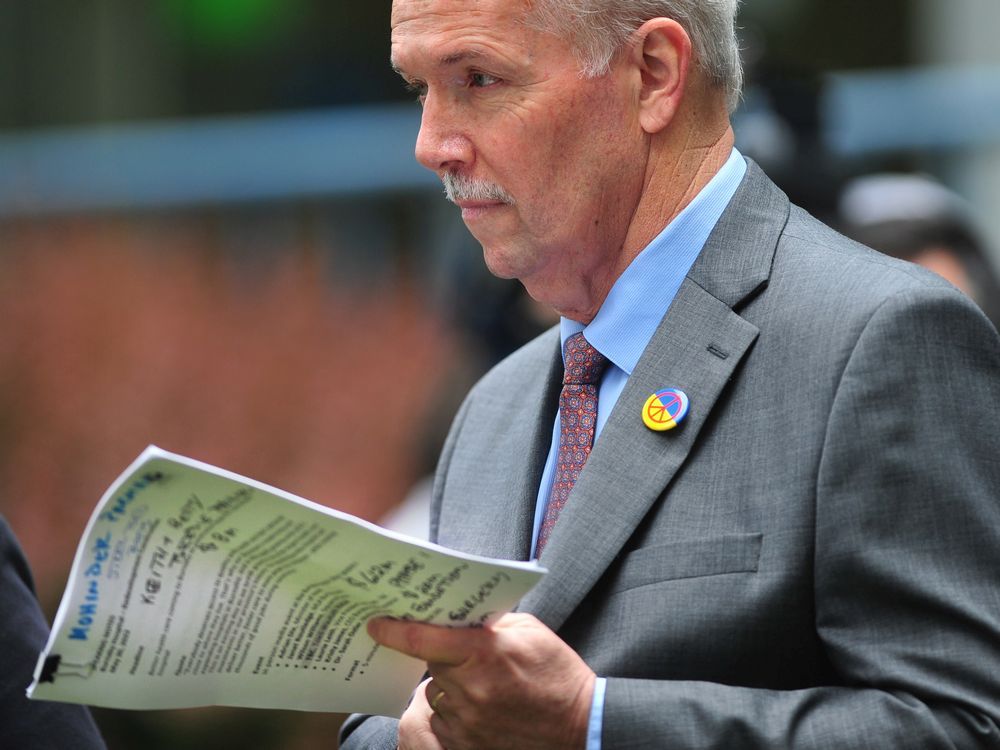 VICTORIA — Prime Minister John Horgan presided over the start of construction on the first phase of the redevelopment of the aging Burnaby Hospital on Monday.

“Everyone who works in this facility has waited many months and years to get to a place where we could throw some dirt into the air,” the prime minister said.

“I brought my own work shoes and I am still wearing them, because there is still work to be done.

“You can’t offer care in a pile of press releases.”

Looking at the Horgan government’s own press releases about the project, it appears to be significantly behind schedule.

When the Burnaby Hospital redevelopment was announced three years ago, construction on the key element of the first phase, a six-storey pavilion, was set to begin in 2021 and be completed in 2023.

Under Monday’s revised schedule, the pavilion, along with other elements of the first phase, will be completed in 2026.

The entire project, including a second patient care tower due to arrive in 2027 at the earliest, is expected to cost “more than $1.3 billion”.

However, a press release last summer stated that the two phases would be completed “at a cost of $1.4 billion”.

A firmer cost estimate awaits a business plan for the second phase that is still in the works.

Unfortunately for the good news theme of the day, Horgan was faced with questions about a health care system that he admits is “in crisis.”

Several BC hospital emergency rooms had to be closed to patients over the weekend due to staff shortages. These closures are increasingly creating a cascade effect around healthcare.

For example, when the Dr. Helmcken Memorial Hospital in Clearwater closed on Sunday for the fifth time this month, patients were sent to Royal Inland in Kamloops.

But Royal Inland is also in crisis due to staff shortages. Some patients and some surgeries are sent to Kelowna General Hospital due to a lack of available operating theaters and staff at Royal Inland.

Such pass-the-buck healthcare is not sustainable.

But when Horgan was asked about the latest closings on Monday, he offered sympathy and little else.

“I know British Columbians are perplexed and concerned if we have to close emergency rooms for short periods due to staff shortages,” the Prime Minister replied, minimizing the significance.

“That is a direct result of appropriate responses to a global pandemic. We see shortages not only in our healthcare sectors, but in the entire economy.”

And so on to “Last year 100,000 people came to BC” – although this time he didn’t repeat his earlier complaint (on social media) that the newcomers had failed to bring their own doctors.

Then it moved on to Ottawa, “We need cash, not just here in BC, but across the country from our federal partner.”

Ideally, the federal government would increase its share of health care financing to 35 percent, from the current 22 percent. For BC, that would be a windfall of about $3 billion.

“The Prime Minister and I, every time I see him, I talk about it,” Horgan said. “I know he understands the importance of this, but I don’t know if he and his team understand how important it is to start.”

For a while, Trudeau postponed discussions until after the pandemic, an excuse that is aging.

“The pandemic is waning, it’s getting endemic, and now is the time to have that conversation,” Horgan said Friday, as he attended the meeting of Western provincial and territorial leaders in Regina.

Horgan was reluctant to consider the possibility that talks with Ottawa about increasing health transfer could fail.

“I don’t want to imagine that,” he told reporters earlier this month.

“I believe the federal government understands their role. We had a very cooperative relationship through COVID. … So I don’t want to imagine what will happen if we don’t agree.”

That was the premiere on May 19.

On Monday, he indicated that the province should consider the possibility that the check from Ottawa will never be mailed.

“We plan to, assuming we don’t get the money,” he admitted.

Conversely, the Prime Minister was asked what the provincial priorities would be if Ottawa provided the money or some of it.

“The priorities and how we’ll manage that when it arrives – we’ll tell you when it arrives,” he replied, waving the call for details. “We are dealing with the world we live in and hoping for a better one on the road.”

Horgan’s reluctance to discuss his priorities for the hoped-for federal billions plays directly into Ottawa’s hesitation.

The federal government would be more likely to fund new health care programs — dental care, pharmacare — where it gets credit for spending.

It is reluctant to issue blank checks to counties for existing programs, believing they will spend the money as they see fit, leaving Ottawa with little or no credit.