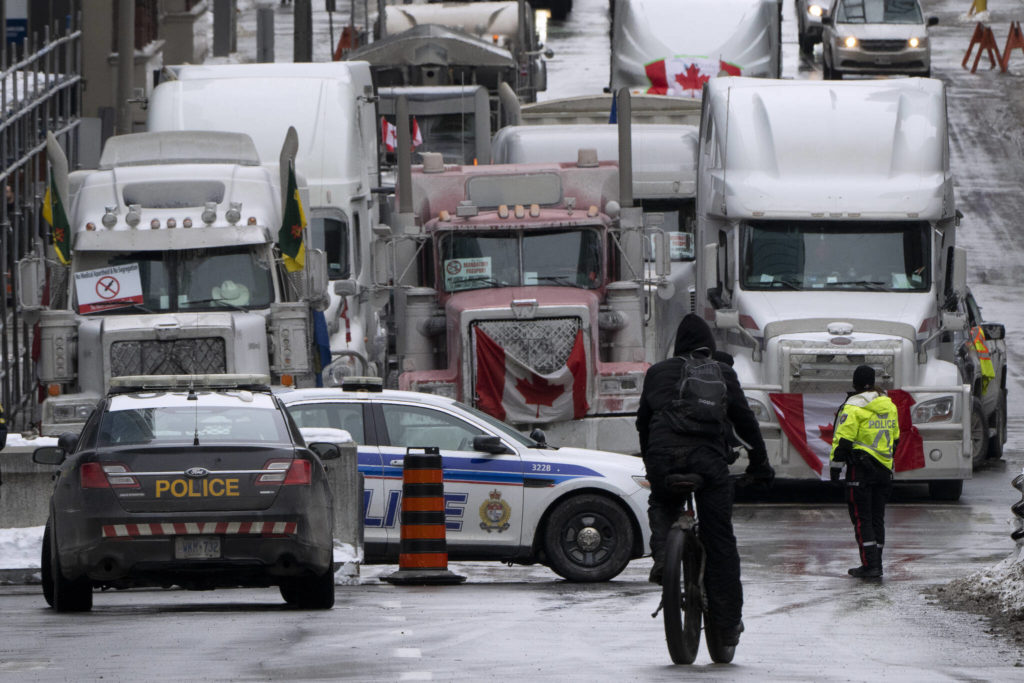 Silence and calm reigned on the streets of Ottawa on Sunday, for the first time in more than three weeks, as police continued their efforts to put an end to anti-government demonstrations that immobilized the national capital.

Roads once clogged by trucks and protesters opposing the public health measures of COVID-19 and Prime Minister Justin Trudeau’s government were largely clear, although debris and other signs of the blockade that critics have labeled an illegal occupation were still there. .

The Ottawa Police Department, which teamed up with troops from across the country, said they had arrested 191 people and filed 391 charges in connection with the demonstrations, although Ottawa Police Chief Steve Bell said the massive law enforcement operation was far from over. used to be.

“There is another phase that will determine how we maintain the streets, how we eventually demobilize, once we determine there is no threat of further protests in our city,” Bell said at a news conference. “We’re not there yet.”

Law enforcement is getting closer “hourly” to fulfilling its promise to clear streets and return to residents, he added.

But the massive enforcement blitz also caught the attention of Ontario’s police watchdog on Sunday. The Special Investigations Unit announced it is investigating two police involvement incidents related to the weekend’s efforts to clear protesters, including one in which a woman was injured when Toronto mounted police stormed the crowd.

The silence that filled the streets around Parliament Hill on Sunday morning lasted all day, although a heavy police presence remained and small groups of protesters still gathered at fences erected to seal off the long-standing heart of the demonstrations.

The police watched them closely from a distance, but did not force them to leave. There are still about 100 police checkpoints to control and restrict who has access to the inner city, and the parliamentary district is now largely fenced off with almost no access at all.

On Bank Street, a few blocks south of Parliament Hill, Centertown resident Mary Werre and a friend were loading trash into black garbage bags. Werre said some local residents had made plans to help clean up and remove any remaining hateful signs.

While Werre was talking to The Canadian Press, a man and woman passed by and returned to complain about a man sitting in a wheelchair on the other street corner. The man called those homeless “vagabonds” and suggested the presence of trucks in recent weeks had slowed down local crime.

“So these are the kind of people residents have dealt with on a regular basis,” Werre said as the man walked away.

Werre said it was nice to wake up on Sunday in relative silence and realize there were no live streams showing action in her area.

Alexis Shotwell, a Centertown resident and professor at Carleton University, said she was glad it seemed to be coming to an end, but was uncomfortable with the sheer numbers of police still on the streets.

“I don’t like having so many checkpoints and so many police around. It doesn’t really make our neighborhood any safer,” she said. “It’s clearly been a terrible time for everyone who actually lives here.”

Jaya Dutta, who lives near Parliament Hill, was so grateful for the more peaceful atmosphere that she went to an officer at a checkpoint to thank him.

“Just to be able to walk around without being yelled at,” she said.

Dutta said she only works a few blocks from her home, but a friend has been taking her to work instead of walking for the past few weeks.

Tow trucks removed vehicles left in the downtown area, and residents of three streets were warned to move their cars or else they too would be towed.

On Wellington Street, in front of Parliament Hill, the convoy’s party epicenter was completely dismantled. The street, which was once three lanes deep with large platforms and RVs and cars, was deserted on Sunday, save for a row of OPP SUVs and a lone crew clearing a recent snowfall from city sidewalks.

The profanity laced signs and anti-vaccination posters that had previously plastered the fences along the street are gone. Only a few pennants of the Canadian flag still fluttered in the wind.

Piles of trash were collected on street corners: broken tents, empty gas bottles, propane tanks and in at least one place a metal bucket full of empty beer cans and liquor bottles.

Sarah Chown, owner of Metropolitan Brasserie Restaurant, said she was relieved to see police clear the intersection where her business is located.

She said she understands the need for barricades and fences to prevent protesters from re-entering the area, but also has reservations.

“We’re kind of stuck in this holding pattern right now,” she said. “Where do we go from here, and when can we operate again?”

While Seguin said she was relieved to see protesters cleared from downtown streets, she has questions about the next steps before she can return to full-time work and customers feel comfortable sitting in her seat.

How long will the barricades remain in place? How long will it take for everything to return to normal?” she said.

Four convoy organizers have been charged and publicly named by police, including original Go Fund Me fundraising organizer Tamara Lich, truck driver Chris Barber and Patrick King, whose Facebook Live videos before the convoy started, said violence and bullets were the only way. to end the COVID-19 restrictions.

Tyson George Billings, known to convoy members as ‘Freedom George’, was arrested Saturday night. The High Prairie, Alta., resident was recording a Facebook Live video bragging about “sneaking past the roadblocks in his truck” and still being out of jail.

“I don’t know if they’re really looking for me,” he said as others in the car shouted “freedom” repeatedly.

Seconds later, red and blue lights came on behind his truck.

He was arrested as he got out of the car and police confiscated a 6-inch knife that he said was his “legal knife.”

Billings faces five charges, including mischief, advising others to commit mischief and obstructing the police.

Meanwhile, Ontario’s Special Investigations Unit said in a publication on Sunday that it is investigating an interaction between the Toronto Police Service’s mounted unit and a 49-year-old woman.

Horse police were deployed Friday night to help control the crowd. At one point, officers attacked the crowd and attacked a woman with a walker.

The SIU said the woman reported a serious injury, and family on social media said she broke her collarbone or dislocated her shoulder.

Ottawa police said in a tweet Friday night that no one was killed or seriously injured following a mass of social media reports of death.

The SIU is also investigating the use of Anti-Riot Weapon Enfields by Vancouver Police officers on Saturday night. The weapon is described as firing “less lethal” ammunition, including direct impact ammunition, chemically irritating release ammunition, and smoke release.

The SIU said no injuries have been reported so far but is asking anyone who has been beaten to contact them.

Meanwhile, the House of Commons debate over the government’s decision to invoke the Emergency Act lasted until another day. The final vote on the measure is expected to take place on Monday evening.

This report from The Canadian Press was first published on February 20, 2022.