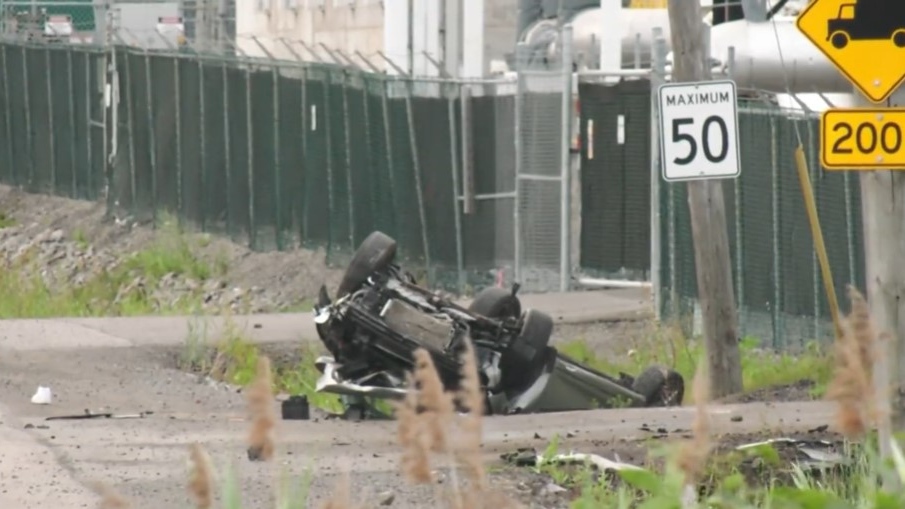 Dozens of police officers from the Montreal Police Department (SPVM) are in the east of the city Friday morning as part of an operation related to a recent shooting.

“This operation is ongoing and is related to the shots fired in Rivière-des-Prairies,” said Véronique Comtois, a Montreal police spokesman. “In order not to harm the operation, no more information is given.”

This comes after shots were fired just before midnight on Maurice-Duplessis Boulevard, near 27th Avenue.

At the scene, officers found a 25-year-old woman.

Police say four suspects, all men, fled in a car and were chased by police. The suspects’ vehicle crashed on Broadway Ave. Two of the suspects were immediately arrested, while the other two men managed to escape. The suspects who were arrested are expected to be questioned by detectives later on Friday.

The suspects’ vehicle crashed on Broadway Avenue in Riviere-des-Prairies during a police chase. (Kelly Greig/CTV News)

Police say they are unsure of the location of one of the suspects, but believe the other is hiding in the area, sparking the ongoing police operation. They say no one was injured in the crash and one firearm was found at the crash site.

Comtois describes the situation as dangerous, but indicates that there is no active gunner on site.

A woman has been injured in a shooting in Rivière-des-Prairies. (Cosmo Santamaria/CTV News)

Manuel Couture, a spokesman for the SPVM, said tactical teams from the local and provincial police are looking for the suspect. The helicopter of the AA Sûreté du Québec (SQ) is also assisting in the operation.

“The main thing we believe is that this person is involved in a shooting and we don’t want to take any chances with the safety of the population and the safety of our police officers. If we have the information that a suspect may be armed in a perimeter it’s a normal procedure to run a large perimeter,” Couture said.

Police are asking the public to avoid a major commercial and industrial area in Montreal East, from Henri-Bourassa Boulevard to the north, the Metropolitan Expressway to the south, Broadway Street to the west, and Marien Avenue to the east. .

It is not known how long the area will remain off-limits. The dog unit is also on site.