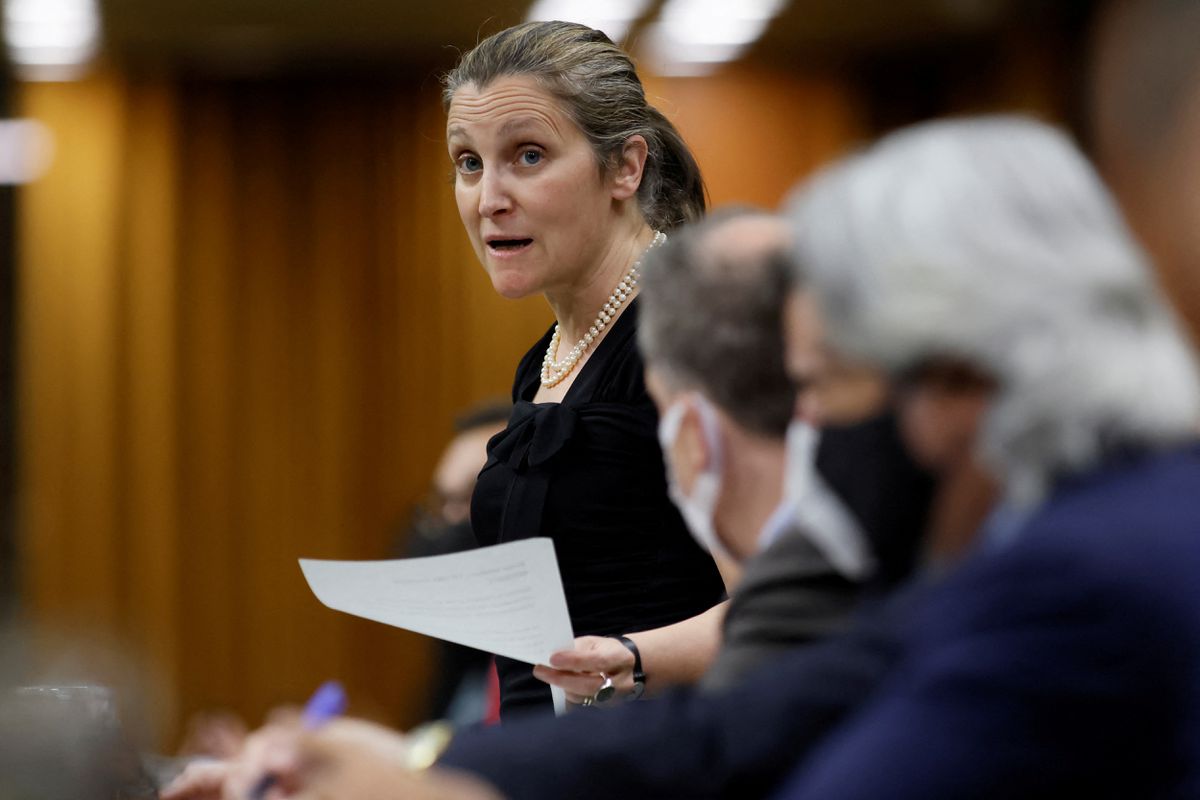 The package of measures will run to $8.9 billion, she said, but all of that expenditure had been previously announced and accounted for in previous budgets.

Those measures include a range of enhanced benefits for individuals through programs such as the Canada Workers Benefit, a 10 percent increase in old age security for seniors over 75, and increased funding for childcare and housing benefits. The minister also noted that many federal income support programs, such as Canadian child support, the goods and services tax credit, old-age insurance and guaranteed income support for low-income seniors, are designed to grow automatically with inflation.

This is the daily Politics Briefing newsletter, written by Ian Bailey† It is available exclusively to our digital subscribers. If you’re reading this on the internet, subscribers sign up for the political newsletter and over 20 others on our newsletter signup page. Do you have any feedback? Let us know what you think†

REGISTER COMPLAINTS ABOUT THE HANDLING OF ACCESS REQUESTS – The federal information watchdog filed a record number of complaints last year about how government agencies handled requests for documents, despite years of promises by Prime Minister Justin Trudeau to reform the system. Story here.

NO COMPENSATION FOR OFFICER ON UNPAID LEAVE – Civil servants placed on unpaid leave for refusing to be vaccinated against COVID-19 will not receive compensation for eight months of lost wages as vaccine mandates are suspended, federal government said in the face of union demands . Story here.

JEAN RUNNING FOR UCP LEADERSHIP; NOTLEY RECOGNIZES VOLUNTEERING PROBLEMS – Brian Jean, the co-founder of Alberta’s ruling United Conservative Party, has officially launched his campaign to become the next leader. Confederation. Story here. Meanwhile, NDP opposition leader Rachel Notley, a week after acknowledging that her party is investigating allegations of mistreatment of volunteers, said on Wednesday that there are problems. Story here.

RCMP UPDATED CORE VALUES – The RCMP is updating its statement of “core values” for the first time in a quarter of a century by adding references to “reconciliation”, “diversity”, “honor” and “empathy”. Story here from CBC.

CAMPAIGN TRACK – Scott Aitchison is located in Ontario. Patrick Brown in Hamilton and London, Ontario, where he spoke with the city’s Macdonald-Cartier Club, according to a tweet. Jean Charest is in Montreal. Leslyn Lewis drives her Haldimand-Norfolk. Pierre Poilièvre is located in Ottawa. There is no word on the whereabouts of Roman Baber’s campaign.

Alberta MP Michelle Rempel Garner is leaving the Brown campaign to focus on the opportunity to seek leadership of the ruling United Conservative Party in Alberta.

But Chisholm Pothier, the Brown campaign’s communications director, says “organizationally” nothing has changed with Ms Rempel Garner’s departure. “We have an organization of more than 1000 people across the country, in every province and territory and the most rides in this country. We have a senior campaign team with a tremendous amount of experience,” Mr Pothier said in a statement.

In a tweet Wednesday night, Ms Rempel Garner said she is giving a leadership offer “serious consideration” after she was encouraged to look for the job, which is being vacated by Alberta Prime Minister Jason Kenney after he received 51.4 percent support in a recent membership confidence vote. . She said she will decide based on further talks about the possibility. “As such, I will no longer be competing in the federal conservative leadership race so I can focus on how best to serve my county.”

TODAY IN THE COMMONS – Projected order of affairs in the House of Commons, June. 16, accessible here.

JACZEK AT BLUESFEST — Helena Jaczek, Federal Economic Development Agency minister for Southern Ontario, announced more than $10 million on Thursday in support of Ottawa Bluesfest — a 10-day, multi-stage music festival that is one of the city’s top attractions. is — and three Ottawa-based tourism organizations.

CHANGE OF ARMY COMMAND – In Ottawa, there is a change of command ceremony for the Canadian Army as Lieutenant General Jocelyn (Joe) Paul takes command of the Canadian Army from Major General Michel-Henri St-Louis, in a ceremony chaired by the Chief of the Defense Staff, General Wayne Eyre.

In Thursday’s edition of The Globe and Mail podcast, columnist Tim Kiladze talks about declines in cryptocurrencies and why, even with an industry experiencing constant ups and downs, this crash matters and what retail investors with money in crypto should do. The decibel is there.

DAY OF THE FIRST MINISTER

The Prime Minister holds private meetings and speaks with the President of Rwanda, Paul Kagame, and the Commissioner for Official Languages, Raymond Théberge.

NDP leader Jagmeet Singh, accompanied by NDP MP Lori Idlout (Nunavut), was scheduled to meet with Nunavut staff and seniors at the Larga Baffin facility in Ottawa, and to discuss the need for long-term care in Nunavut. The NDP leader would also participate in the question period.

No schedules from other party leaders released.

A survey of public perception of the news industry found that more people are avoiding the news and that Canada is one of the countries with more trust in the media. Story here.

Campbell Clark (The Globe and Mail) about how it’s not just Marco Mendocino who plays bob and weave with the emergency law: ‘As a minister you are used to the partisan game of bob and weaving in parliamentary committees. Perhaps liberal ministers have a hard time understanding that the committee assessing the use of the emergency law is not the same. So someone – specifically someone named Justin Trudeau – should tell them in loud, clear terms, this is different.”

Konrad Yakabuski (The Globe and Mail) on Ottawa’s oil and gas emissions targets that rely on hopes and miracles: When Prime Minister Justin Trudeau and Environment Secretary Steven Guilbeault announced Ottawa’s greenhouse gas emissions targets for the oil and gas sector in March, they emphasized that there is no trade-off between ‘clean air and good jobs, a healthy environment and a strong economy.” They called their blueprint “an ambitious and achievable sector-by-sector approach” to reduce Canada’s total emissions to 40 percent below 2005 levels by 2030. Despite the optimistic presentation, not many observers agreed with the government’s claim. that Canada’s oil slick could reduce its emissions. by 81 megatons, or 42 percent, within eight years — at least not without cutting production and having all the negative effects on the Canadian economy.”

Akwasi Owusu-Bempah (Contributed to The Globe and Mail) about how it’s not enough for the Toronto police to release data on racism. They must act on it: “It’s time the Toronto Police Department stopped apologizing for racist policing and started doing something meaningful to address it. Current approaches to the force clearly don’t cut it. Data released Wednesday paints a damning picture of the nature of race and policing in the city, showing that black people are overrepresented in both violent incidents and comic strip searches. As the force itself acknowledges, these differences cannot be explained by the behavior of those involved, which means that the responsibility lies with the police. Chief James Ramer points to systemic racism. I would suggest systemic racism and years of inactivity – itself a reflection of systemic racism.”

Hugh Segal (Contributed to The Globe and Mail) on the absolute rejection of sedition should be a non-negotiable part of democratic politics: Whatever the future policy priorities of the Federal Conservative Party, Canada’s core constitutional values ​​of ‘peace, order and good governance’ are non-negotiable parts of our constitutional framework. That framework will not tolerate any incitement to the incendiary and illegal overthrow of properly elected governments, nor for any candidate who signals any ambivalence about that threat to our democratic system. Canadian voters should have no time for politicians who don’t expose sedition and those who proposed it.”

Do you have a news tip we should look at? Email us at tips@globeandmail.com† Do you want to share documents securely? Contact us at SecureDrop†