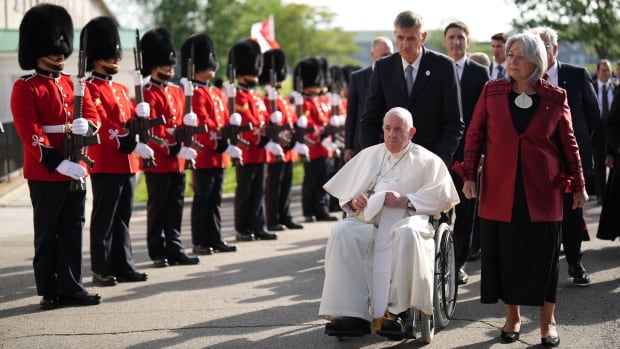 Hundreds of people lined the streets from Jean Lesage International Airport to the Plains of Abraham hoping to catch a glimpse of Pope Francis as he arrived in Quebec City on Wednesday.

It marks the fourth day of his visit to Canada, which he calls a pilgrimage of healing, reconciliation and hope.

After meeting Governor General Mary Simon and Prime Minister Justin Trudeau, he delivered a public speech at the Citadelle, the fortress overlooking the plains and the St. Lawrence River and adjacent to the Old Town.

In it, he expressed feelings of “deep shame and sadness,” as he did two days prior to the survivors of the residential school in Maskwacis, Alta, and reiterated a request for forgiveness “for the injustice that so many Christians have committed against the indigenous peoples.” done”.

“I am thinking especially of the policies of assimilation and voting rights, including in relation to the residential school system, which have harmed many indigenous families by undermining their language, culture and worldview,” he said.

“In that deplorable system promoted by the government authorities at the time, which separated many children from their families, several local Catholic institutions played a role.”

The Papal plane landed shortly before 3 p.m. ET. A small party of Québec and Indigenous leaders, as well as survivors of the residential school, greeted him before he was transported by motorcade to the Citadelle where a welcoming ceremony was held. A chartered flight with guests and media leaving the Edmonton airport was delayed, delaying the official ceremony by an hour.

In speeches at the Citadelle, both Simon and Trudeau reflected on the week’s events.

“You recognized the abuses experienced in residential schools that resulted in cultural destruction, loss of life and the ongoing trauma that indigenous peoples in every region of this country face,” Trudeau said.

“As Your Holiness said, asking for forgiveness is not the end of the matter, it is a starting point, a first step.”

Simon said it is “our collective duty” to remember what happened in the residential schools, “to tell the stories of survivors and of those who never made it home, and to support those who did and to take care of.

Mental health support. Helping families discover the true fate of those who never came home. And care for indigenous peoples who need time and space to process what this visit means to them and what the next steps would be must be .”

In his address, the Pope said local Catholic communities are committed to promoting indigenous cultures, customs, languages ​​and educational processes “in the spirit of” the United Nations Declaration on the Rights of Indigenous Peoples (UNDRIP).

In its 94 calls to action, the Truth and Reconciliation Commission called on all ecclesiastical parties to the residential school settlement to “formally adopt the principles, norms and standards of the United Nations Declaration on the Rights of Indigenous Peoples as a framework and for reconciliation” including “respecting the right of indigenous peoples to self-determination in spiritual matters.”

In a nod to the seven-generation Haudenosaunee principle, which teaches that decisions made today should influence the next seven generations, the Pope said: “We must be able, as the indigenous wisdom tradition teaches, to look seven generations ahead. , and not for our immediate convenience, until the next election, or the support of this or that lobby,” he said.

He also stressed the importance of protecting the environment, the family, multiculturalism and accepting Ukrainian and Afghan migrants.

“Indigenous peoples have a lot to teach us about caring and protecting the family,” he said.

“May the mistakes the indigenous peoples have endured serve as a warning to us today, lest care for the family and its rights be neglected for the sake of greater productivity and individual interests.”