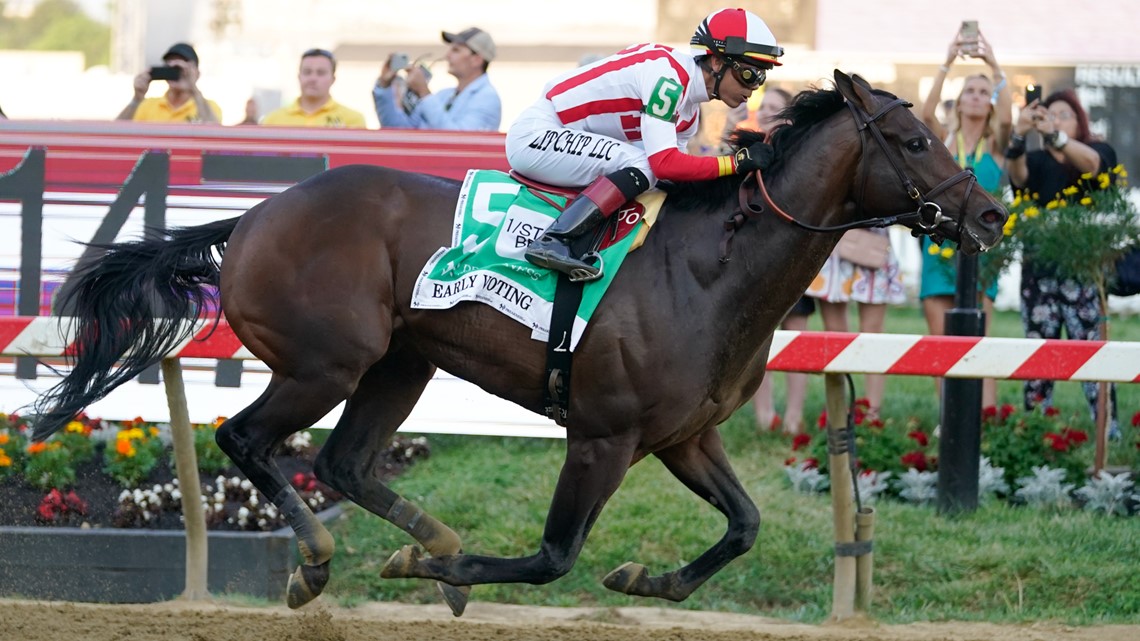 Early Voting’s win confirmed a decision his trainers had made much earlier.

BALTIMORE — Early Voting stopped hard-charging favorite Epicenter from winning the Preakness Stakes on Saturday, confirming the decision to skip the Kentucky Derby and aim for the second leg of the Triple Crown.

Early Voting trailed behind the leaders for much of the race before taking the lead around the final corner. He finished 1 1/4 lengths ahead of Epicenter, who finished second just like in the Derby.

“I was never worried,” said Early Voting trainer Chad Brown. “Once we had a good cause, I actually preferred it. It was fine to go into the lead, but I thought at the back it took a good horse to beat us. And a good horse came up to us near the wire and it was about the only thing that could run with us.”

The Preakness was run without Kentucky Derby winner Rich Strike, after his owner prioritized extra rest over the chance of winning the Triple Crown. Early Voting could have walked into the Derby, but Brown, and Klaravich Stables owner Seth Klarman, opted for some extra rest as well.

EARLIER: There will be no Triple Crown winner for fourth straight year, Rich Strike pulls out of Preakness

“It is very difficult to get an owner to pass the Derby, and they made the right choice,” said jockey Jose Ortiz, who won the Preakness for the first time. “The horse, I don’t think he was seasoned enough to run in a field of 20 horses and they proved they were right today.”

“Cloud Computing was once in a lifetime and now I have two in my life,” said Klarman, who grew up three blocks from Pimlico Race Course and celebrated his 65th birthday. “It’s really hard to believe it could have happened.”

“Disappointed,” said Epicenter trainer Steve Asmussen. “He just had too much to overcome.”

Early Voting finished first in a field of nine horses, including filly Secret Oath and three coming back from running in the Kentucky Derby two weeks ago. Early Voting, a son of Gun Runner, won for the third time in four career races to take the $900,000 winner’s share of the $1.65 million purse.

“He got off,” assistant coach Baldo Hernandez said this week. “He’s in good shape.”

He was in good shape to handle some adverse weather conditions. The 147th running of the Preakness took place in near-record heat with temperatures soaring to 90 as the horses entered the starting gate.

Klarman said Early Voting is unlikely to take place on June 11 in the 1 1/2 mile Belmont Stakes due to questions about whether the foal can handle the distance.

Early Voting had no problem with 1 3/16 miles in the Preakness.

“It’s just beautiful when a plan comes together,” Brown said.