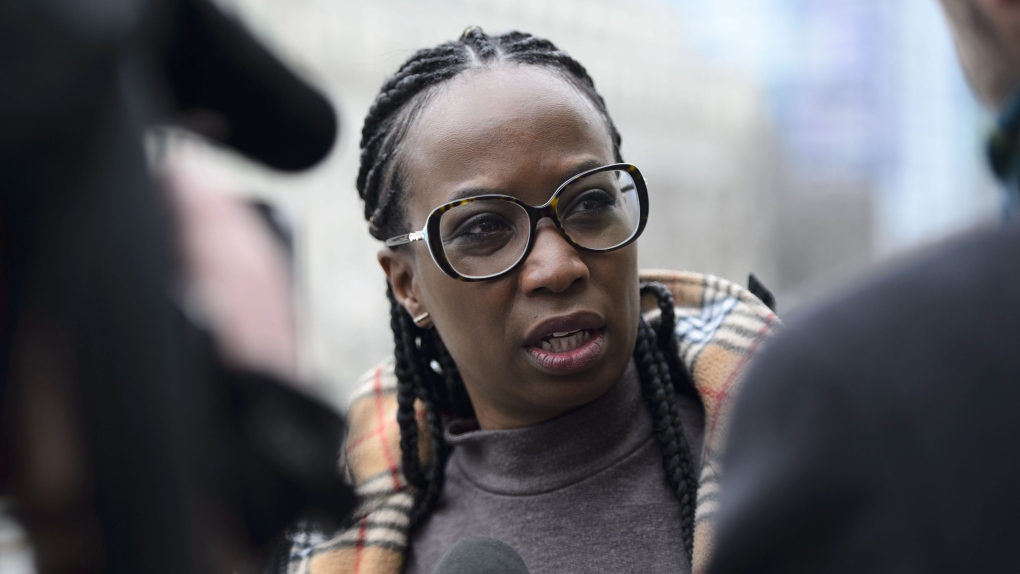 A former MP who says she was recently racially profiled by parliamentary security calls on the agency to tackle racism within its ranks.

Celina Caesar-Chavannes said she was questioned by members of the Parliamentary Protection Service in June when she tried to enter the police station wearing her parliament pin.

The pin, worn by current and former MPs, is intended to allow the wearer access to any building in the parliamentary precinct without their bags and person being searched, she said. But she said the security forces asked her where she got the pin and tried to search anyway.

Caesar-Chavannes was elected a Liberal Member of Parliament in 2015 for the Whitby, Ontario riding, but left the caucus in March 2019 and remained as an independent member until the election in the fall.

After being questioned, Caesar-Chavannes said former New Democrat MP Peggy Nash was able to walk through security without incident.

“Peggy left politics long before I did,” Caesar-Chavannes said. “No one expects them to recognize us, but the pin is universal. Security knows what that is.’

Although she didn’t see the first part of the meeting, Nash said she arrived at the entrance to the Senate building with her own pin and security waved her through.

Nash recalled Chavannes-Caesar saying at the time that when security asked her where she had bought her pin, “It was as if they didn’t believe she could legitimately be in possession of a parliamentary pin.”

This is not the first time the security service has been called upon to profile people of color on the hill.

In 2019, the agency apologized after an incident at a lobbying event called Black Voices on the Hill in which several young participants said they were referred to as “dark-skinned people” and were asked by a guard to leave a parliamentary cafeteria.

In her farewell speech in 2021, Mumilaaq Qaqqaq, who was the NDP MP for Nunavut, said she does not feel safe on the hill. She described being chased down hallways and racially profiled by members of the Parliamentary Protection Service.

“Every time I step into the House of Commons grounds and speak in these rooms, I am reminded every step of the way that I don’t belong here,” said Qaqqaq.

Responding to a tweet posted by Caesar-Chavannes on the day of the incident, former NDP MP Laurin Liu said: “This daily racial and gender profiling when I was on Parliament Hill ten years ago scared me at work. to appear .”

NDP MP Matthew Green, who is a member of the parliamentary Black Caucus, said the group has also heard other reports.

“We need to work with senior leadership to ensure all staff members are adequately trained,” Green said, noting he is in talks with caucus members to ensure situations like this don’t happen again.

Caesar-Chavannes said Larry Brookson, acting director of the Parliamentary Protection Service, responded quickly to the incident and apologized. But she believes more needs to be done, saying that apologies without action mean nothing.

“It didn’t sound like that was fully thought out, but there was a commitment to work with her to move forward and make sure the staff got the right training,” Nash said.

Caesar-Chavannes said Brookson invited her to meet with their diversity, equality and inclusion specialist, but there was a delay of about five weeks in scheduling the meeting. During that conversation, she demanded accountability and clear steps to prevent similar situations in the future.

The conversation has since watered down, she said.

“In a position of power and authority — you have the ability to make decisions about what happens next for people in that space,” she said, adding that she advocates for those who are subject to the same kind of treatment and less privileged. to speak out.

“I think they would be wise to take this seriously because it’s 2022 and this kind of blatant assault shouldn’t be here,” Nash said.

“As long as there are persistent stereotypes and as long as people dismiss complaints about someone’s bruised feelings, truly representative parliaments will not be able to take their full place, and that is just essentially undemocratic.”

When asked about the incident, the Parliamentary Protection Service said in a statement that it is “going through a process of assessment and capacity building”.

“We remain committed to continuous improvement, promoting authentic exchanges and receiving constructive feedback,” the service said Thursday, adding that the top priority is the safety and well-being of employees and visitors to the Hill.

“We have to do better,” said Caesar-Chavannes.


This report from The Canadian Press was first published on August 1, 2022.


This story was made possible with financial support from the Meta and Canadian Press News Fellowship.