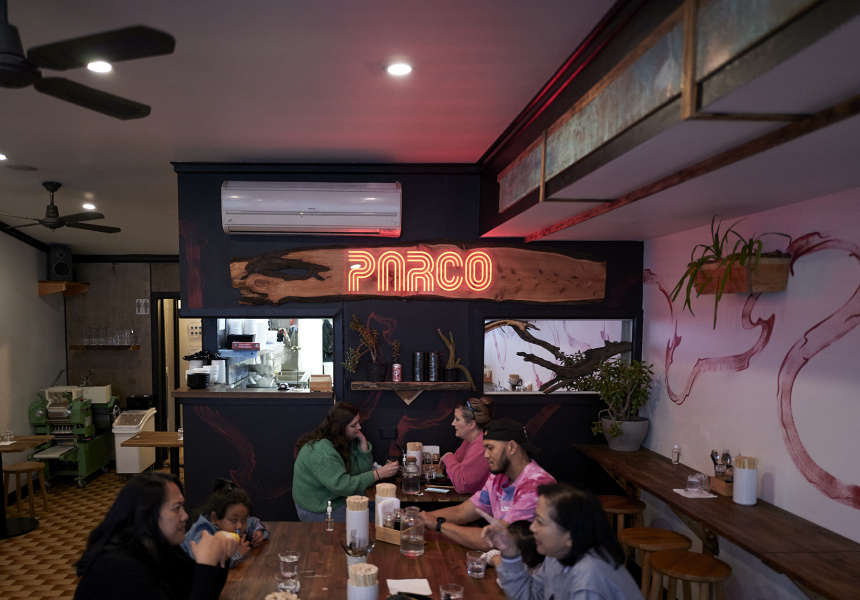 Sardinian-born Federico Congiu works as a chef at Rinaldo Di Stasio’s restaurants in Melbourne. But during Melbourne’s 2021 lockdown, he swapped luxury Italian fare for ramen, and ran a pop-up at Shujinko’s Elizabeth Street location with fellow chef Manato Deleon.

Not long after, they opened this special ramen restaurant, Parco, in Moonee Ponds. Here, all the broths and noodles are made from scratch, and the couple uses homemade koji for an umami bomb effect.

Congiu lived in Japan for two years, where his obsession with ramen began. Back in Melbourne he couldn’t find any windows like he had experienced in Japan. Then he started experimenting at home.

Parco’s thick, creamy broth in the middle of the broth Congiu tried at a high-end yakitori joint. It’s made from chicken scraps instead of pork bones, and takes between eight and 12 hours to get to the right flavor and consistency.

The signature ramen comes with the aforementioned stock and a choice of charred pork or chicken chashu. There is also a decadent truffle version; a miso-packaged vegan option with a shiitake and soy base; and a rich lobster ramen topped with a baby lobster tail. The couple only makes one batch a week and it’s first come, first served.

The majestic figure in the surf — and the neon sign in the window — is Congiu, reimagined as a lion guzzling noodles. The no-frills space is accented by dark wood, and there are only 19 seats for diners wanting to eat.