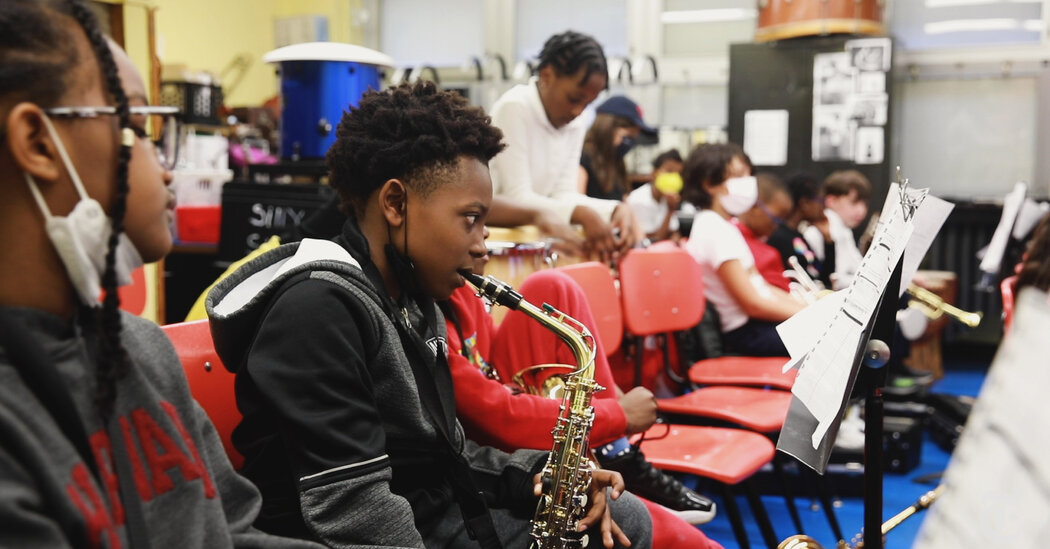 Surrounded by classroom walls of colorful violins and music theory posters, Roshan Reddy counted to three. He lifted his palm, a chorus of gleaming horns and woodwinds hummed to life, and the opening notes of Adele’s “Easy on Me” filled the bandroom at PS 11 Elementary School in Brooklyn.

Despite the squeak of the clarinet and the occasional bellow of a rogue saxophone, nearly every student smiled.

It had been two long years for Mr. Reddy’s fourth and fifth grade band students, and for the music teachers and their students in New York City. As the Covid-19 pandemic closed schools, PS 11’s music program was one of many that struggled to transition online, interrupting children’s introduction to music during some of the key years for musical development, according to educators and experts.

PS 11 students who had instruments at home practiced in their living rooms, on their fire escapes, in their grandparents’ basements. But many had left their instruments behind and had to watch from the sidelines as their peers tried to stay together via Google Meet.

Fifth-grader Diara Brent, a budding saxophonist, was aghast that she didn’t take her saxophone home in the chaos of school closures. “I typed in chat like crazy that I didn’t have the instrument,” she said. “I just heard them play. I couldn’t do anything.”

Now that the students of the PS 11 band are back in the classroom, they are rediscovering their confidence as musicians. But it was no small task to fill the gap of lost instruction. “Covid has destroyed my program,” said Mr Reddy, the school’s band director. “It hasn’t come back to the way it was for every student.”

The pandemic interrupted music education for many elementary school students at a critical time — in the years when their brains were just beginning to make “sound to meaning” connections. In New York City public schools, elementary music education, which had been stable for five years, declined 11 percent between the 2019-20 and 2020-21 school year, according to the New York City Department of Education’s Arts in Schools report.

For students whose only access to music education comes through their public schools, the pandemic school closures have been particularly disruptive. But research also suggests that music can help children rebuild what was lost.

PS 11 director Abidemi Hope said having a music program at the school helps her students develop skills beyond academic preparation, such as refining listening and speaking, learning to ask questions and making complex discoveries. It is also about giving students at her economically diverse school access to music, regardless of their economic status.

When Mrs. Hope was named principal in 2014, the school was academically oriented and the music program was small – about 40 students. “I’ve always wanted to change that,” she said.

Ms. Hope hired Roshan Reddy, a working musician, as a full-time music director for her band program in 2018. He had already worked as a substitute teacher for the New York State Department of Education for two years, teaching in almost every neighborhood in Brooklyn, but he was impressed with Director Hope’s vision for the music program.

“Principal Hope is always trying to do something new,” said Mr. Reddy. “You think you’ve reached the limits and then Mrs. Hope says we need to go a little higher.”

By the end of Mr. Reddy’s first year added lessons for strings, guitar, and ukulele. “Before it was really select,” said Mr. Reddy. “When I walked in, I wasn’t going to say no to anyone.”

The program quadrupled in size, supported by a mix of school and PTA funds. During their closing concert in the spring of 2019, the students of the invigorating music program performed for three hours. “People who had played before left at the end of the game because it was taking so long. They said, ‘I have to go home,'” Mr Reddy said with a laugh.

The Class of 2020 of PS 11 was not allowed to play a closing concert. When schools closed in March, Mr. Reddy wrapped the electrical wires, tied up the classroom chairs, detuned the violins, sanitized his instruments, and put them in the music room closet for storage.

Virtual teaching was a challenge. “It was a nightmare at first,” said Mr. Reddy. He spent hours creating video recording assignments that students could upload to their Google classroom. Over the summer, he scoured YouTube for ideas to enhance his curriculum.

The following school year, each music student was given a recorder or ukulele to play in class. The students used Chrome Music Lab to create songs and submitted them as assignments. But nothing compared to being in the physical classroom, and some students stopped attending, Mr. Reddy said.

Julian Sanon started out as one of Mr. Reddy’s violin students in second grade. He has not taken online music lessons during the pandemic. Instead, he, his father, and his brothers played music together at home and even created a family bond that lasted a week. But Sanon missed his personal music lessons at school, where he could play more complex arrangements with his friends in the drum line.

Now that that school is back in the real world, “everyone around you is connected in the same music,” Sanon said, back in one of his favorite places: Mr. Reddy’s music room.

“Yeah,” said Miles Dutra, another fifth-grader in the drum line. “Because you have to play in harmony. If one person messes up, everyone else ruins it.”

Sanne nodded. “So when you do it right, it’s kind of like, peaceful.” he said.

Next year, budget cuts could force some schools to reassess their arts programs. School budgets are generally tied to the number of students enrolled, and many schools will see a decline next school year after student numbers in New York City public schools have fallen 6.4 percent since the start of the pandemic.

Elizabeth Guglielmo, Director of Music for NYC Public Schools, said that while music was hit hard during the pandemic, art is essential to the rehabilitation process. “It’s always our hope that it will be considered a core topic,” Ms Guglielmo said.

At PS 11, enrollment fell nearly 3 percent between this school year and the previous one, according to Ms Hope, who said she may have to rely more heavily on PS 11’s relatively large PTA budget, a resource many schools don’t have, to to fund the music program. “I hope the mayor can rethink how we invest in our children,” she said.

As his senior year of elementary school draws to a close, Zair Johnson, a 10-year-old percussionist who made his own drums from cardboard in his apartment during the pandemic, can be found on Thursdays performing drumline drills with a shiny aluminum armor of drums slung over his shoulders. .

Johnson loves having all the instruments in the classroom within reach. “You can try the congas, violin, piano, djembes, ukulele,” he said. The only instrument he doesn’t recommend is the cello, but he loves to “grab a guitar and just start playing,” he added. “It’s quiet for me.”

In the evenings, Johnson watches drumming instructional videos on YouTube at home and uses scenes from the 2002 film ‘Drumline’ to learn new percussion techniques.

mr. Reddy recognizes the enthusiasm of his own early days as a musician, growing up on a rural Delaware farm. “Music was my best friend,” he said.

At school, music instilled confidence and enabled him to participate socially in class without words. The same goes for his quieter students now. “The kids are really finding their voice through music in a way they couldn’t through anything else,” he said.

As the fifth grade of the 2022 PS 11 prepares for graduation this month, some of Mr. Reddy’s students have already accepted placements in high schools with specialized music programs. One goal of the band program is to prepare students for more challenging music education. But most of the time, Mr. Reddy says, he just wants kids out of school who love music.

“It’s not about creating a little bit of Mozart, it’s about students finding their own strength,” he said. “We are the people who need to carry music through this moment.”