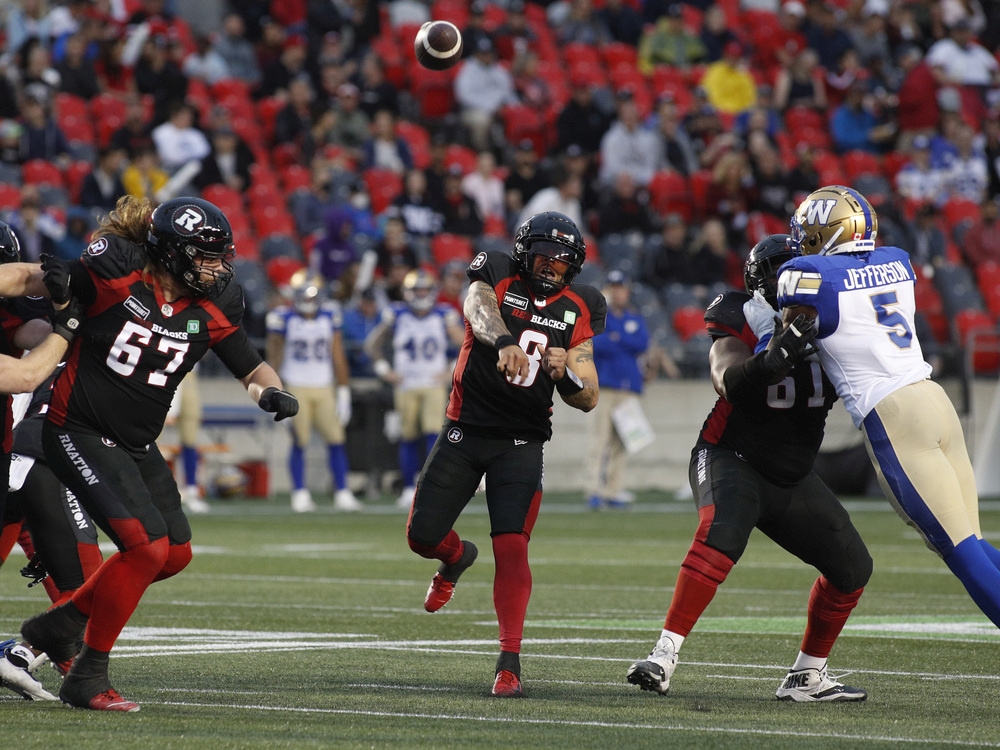 Nate Behar briefly summed it up after Friday night’s 19-12 loss to the Winnipeg Blue Bombers.

As in Week 1 – a 19-17 defeat, also at the hands of the Bombers – the Ottawa Redblacks were unable to complete their offensive runs in their home opener. Four field goals. No touchdowns. The Red Zone Blues. Now, with a week to go before they meet the BC Lions at home on Thursday, June 30, there’s still a lot to be worked out.

“Finish,” said Behar, who caught seven passes for 91 yards. “It is a simple word. I’m sure it will be plastered all over the walls. When we get back from farewell week (Head Coach Paul LaPolice) he might have a tattoo on his neck with the word ‘Finish’. The receivers were talking… we felt an incredible amount of confidence from the 25 to the 25. It just felt easy – hitting this, hitting that. Then it sputtered. Some of it was punishments, some of it was lack of execution. Maybe we’re trying to go too fast, not breathing. We need to figure that out, find out what the hell is going wrong down there and turn it off.”

The Redblacks defeated the defending Gray Cup champions in each of Weeks 1 and 2. On Friday, the Redblacks outperformed in pretty much every area except the leaderboard, which is most important. Ottawa again dominated the first half, but only had three field goals to prove.

“I don’t want to do the whole moral victory thing,” Behar said. “There’s a big difference between a moral victory – with people patting you on the back and you may not get what you need, that’s working hard and getting better – versus we’re 0-2, let it go, enjoy it during the farewell week, but have that hunger to get better. The moral victory: ‘Hey, we’re doing well, but…’ I don’t think that’s going to help us in the locker room.”

Receiver Jaelon Acklin, who had seven catches for 77 yards, said he thought the Redblacks “played pretty well. We can’t make mistakes, not even myself. We’re one or two games away. We’ll get the bye week out of the way.” clean it up and make the best of it.”

Two turnovers, both on failed third-down attempts in the fourth quarter, and penalties (10 for 96 yards) hurt. An obvious harbinger of the kicker penalty on Adam Auclair late in the match was the final dagger. It should also be pointed out that the officials had a bad night, with head-scratching penalties going both ways.

Redblacks quarterback Jeremiah Masoli followed up last week’s 380-yard passing effort with 320 yards. He looks confident and in control, something that has been missing in Ottawa for the past two seasons.

Asked about missed opportunities, Masoli said: “Two come to mind: the fumble; that led to the scoring of a touchdown. That’s for me, 100 percent. And then the throw to Darvin (Adams in the end zone). I had a little pressure to the right, but if I throw it out a little more… He led the man upstairs. Our expectation is to win a championship. We work every day to win a championship.”

It’s hard to pinpoint what happened in the second half of each of the first two games. Clearly the Bombers stepped up their efforts. But there has also been disappointment from the Redblacks. It’s about sinking your teeth into an opponent and not letting go. Finish… there’s that word again.

“It felt a little flat, which is frustrating,” Behar said. “We have to try to get our energy under control a bit better. Ride the highs and lows and just stay level and keep that foot on the gas the entire time. We did some good things in the second half. We still moved the ball and the defense made play. But the energy has to be aligned all the way.”

For the second consecutive week, the Redblacks did not call a timeout late in the first half when they had the ball close to midfield. But understand this: Ottawa went into the wind and probably had to move the ball 20 or 25 yards before it got into the field goal range. Plus – and I was wrong – each team only gets two timeouts per game, not two per half. So coaches are careful to protect timeouts because they really should save at least one for a potential challenge unless they are really sure they will get points.

The voices of the veteran players will be heard as the Redblacks breathe and prepare for the Lions.

“We have a lot of guys hanging out (in the bye week),” Masoli said. “One of our leaders, Avery (Williams, linebacker), said, ‘Don’t waste your time, don’t sit on the couch. Come back healthier and in better shape. Flush it all down mentally and we’ll be back and getting going.’ ”

†It’s understanding that you have enough space to do great things, and then understanding what wasn’t good enough to do it,” Behar said. “It’s not rebooting everything, blowing everything up. It’s like, ‘OK, we know we can do X, Y and Z, we got X yards. How do we improve it?’ That should be the focus, cleaning up our mess, cleaning up the stuff we killed ourselves on.”

Violation B-: Lots of things to really love. Masoli looked sharp again. The offensive line was solid despite allowing three sacks. Running back Devonte Williams rushed for 85 yards on 12 carries. And the receivers are a force. But the team has to push the ball into the end zone.

Defense B+: Really good in the first half. Gave away in the second half, as Winnipeg got its run game on track. Money Hunter had one interception and five tackles. Frankie Griffin had seven tackles, Avery Williams had six. Lorenzo Mauldin IV and Tre Hornbuckle each had a bag.

Special teams D: A unit that regularly gets high marks here did not have its best night. Reliable Lewis Ward missed one of five field goals. Richie Leone, one of the CFL’s top gamblers, averaged 38 yards. And a rough penalty call on Adam Auclair was the final nail in the coffin.