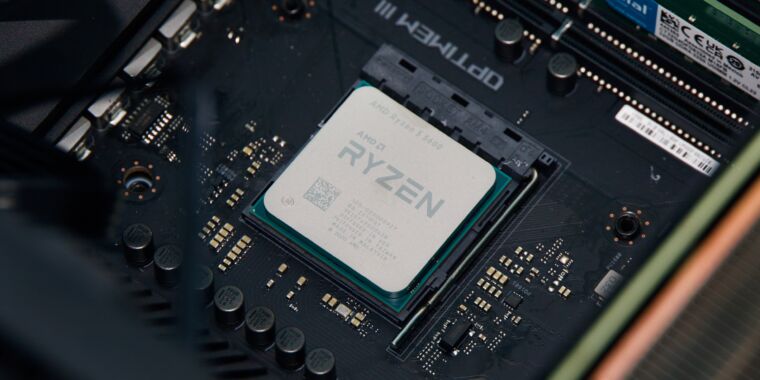 Nearly a year and a half after the launch of the first Ryzen 5000 processors, the Zen 3 CPU architecture is finally coming to cheaper chips.

AMD’s Ryzen 5 5500 and 5600 CPUs (which go on sale today for $159 and $199, respectively) are both six-core 12-thread processors aimed squarely at mid-range, price-conscious PCs used for gaming and photo and video editing. The new Ryzens significantly undercut the original $299 asking price of the Ryzen 5 5600X (the 5600X was, for many months, the cheapest way to get Zen 3). And the CPUs finally provide a replacement for the last-gen $199 Ryzen 5 3600.

But the new chips have stiff competition in Intel’s Core i5-12400 processor ($210-ish with an integrated GPU, $180-ish without one). Intel’s desktop CPUs were saddled with the aging Skylake architecture and/or the aging 14nm manufacturing process for years, but a modern architecture and the Intel 7 process make the 12400 Intel’s most appealing mid-range CPU option in a long time. The Ryzen 5 5600X has also seen price cuts recently, falling down to around $230 to make more room for the $300 eight-core Ryzen 7 5700X.

Let’s see how the Ryzen 5500 and 5600 chips perform and whether they’re good buys for a new PC build (or if you’re upgrading an old one).

Performance: No surprises from Zen 3

Zen 3 is a known quantity at this point, and there’s nothing too surprising about where the 5500 and 5600 end up in most of our benchmarks. In both single- and multithreaded performance, the Ryzen 5500 and 5600 represent a solid step-up compared to Zen 2-based Ryzen 3000 and 4000-series chips, as well as any of Intel’s various six-core Skylake derivatives. The Intel chips are represented here by the Core i5-10400, but many 8th- and 9th-gen Core CPUs fall into this category, too.

The Ryzen 5 5500 makes an especially strong case for itself, offering between 90 and 95 percent of the Ryzen 5 5600’s performance for about 80 percent of the money in the majority of the tests we’ve run. This makes sense, since the 5500’s peak 4.2GHz clock speed is about 95 percent as fast as the 5600’s 4.4GHz clock. The one outlier was our Handbrake video encoding test, where the Ryzen 5600 was about 13 percent faster. The 5500’s reduced L3 cache (as well as its reduced clock speeds) could be slowing it down a bit.

The Ryzen 5600 also looks a bit mediocre next to the Core i5-12400. The 12400 beats the Ryzen in everything but the Handbrake encoding test and generally costs $20 less if you’re buying the version without integrated graphics. The Ryzen 5 5600’s multithreaded performance isn’t all that different from the Core i5-12400’s, but Intel manages to pull ahead by 12 percent in the Geekbench test and 17 percent in the more-intensive Cinebench test. This makes the i5-12400 a more appealing option, particularly if you’re playing 1080p games at high frame rates. (Lower resolutions at higher frame rates tend to be CPU-bound, while 1440p and 4K resolutions are typically more GPU-bound.)

One thing we couldn’t test was how the 5500 and 5600 stack up to the existing six-core Zen 3 chips in AMD’s lineup, the Ryzen 5 5600G and Ryzen 5 5600X. Other sites’ 5600X benchmarks (and the similar specs) suggest that the 5600 is so close to the 5600X’s performance that you can safely ignore the 5600X most of the time, saving yourself $30 in the process. But the 5600G still has a useful niche as the only one of these chips with an integrated GPU. That feature makes it a decent choice for a GPU-less low-end gaming PC (whether you don’t intend to add a dedicated GPU at all, or if you’re waiting for prices to come down to more reasonable levels).

Our Handbrake encoding test is fairly useful for doing some quick napkin-math energy-usage and power-efficiency calculations. That’s because it’s a timed test, and power consumption is mostly consistent throughout the entire encoding task.

AMD’s power efficiency compares well to older 10th- and 11th-generation Intel chips. The Ryzen PCs draw a bit more power at the wall, but they also take less time to complete the work. But the Core i5-12400 manages to catch up and then some, thanks to the Intel 7 process. AMD may well regain its power-efficiency edge with Ryzen 7000 CPUs on TSMC’s 5nm process, but for now, Intel has a small advantage (at least when you’re not running a Core i7 or i9 CPU with its power limits turned up).