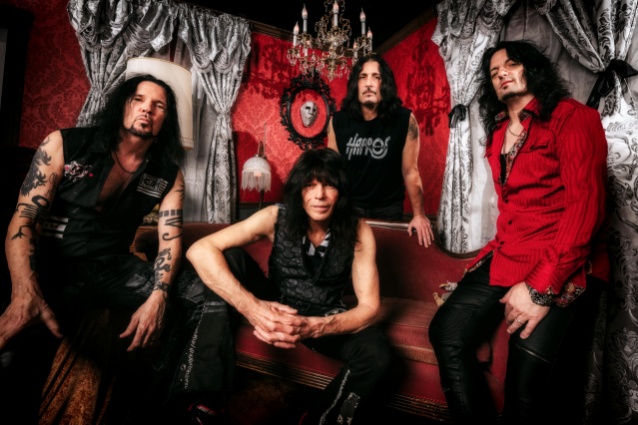 bassist Rudy Sarzo spoke to Al.com about his decision to rejoin SILENT REL after 18 years of absence. Asked if he needed to relearn any of the material or if that music was just embedded in his DNA, Rudy said: “It’s such a multi-level question. The challenge was actually — and here’s the tricky part — I’m not the same bass player. I’m not the same musician. I’m not the same human being. It’s kind of like 40 years take a picture ago and try to recreate the expression you’ll have on your face for the rest of your life. No you don’t. Every time you go into a studio, that’s a snapshot of that moment. And then in my case, 40 years later, you’re playing the same songs again. [Laughs]

“I was a member of THE GUESS WHO just before I came back to SILENT REL and before that I had played with BLUE YSTER CULThe continued. Which isn’t necessarily known as ’80s metal. I’ve played in so many genres. So that’s all part of my DNA now. Now if I’d been a lifer, ie a guy who’s only been in one band, that kind of musical path, what happens is you really don’t have that much of those outside influences, musically.

“But to go back to the energy and physicality involved in what we do (in SILENT REL),I train. I get on the treadmill, I work on my cardio and all of that to be able to do a high level show that you would do 40 years ago and go on tour, get on a tour bus and do it every night. And that was your workout. You didn’t have to go to the gym. So the more shows we do, the more we become that band that people were familiar with watching us tour for months and sometimes a year and a half.

“What’s different about it? SILENT REL is SILENT REL was the first band – and I go back to 1978 when I first joined Randy Rhodes in the band – that every individual, we all had the same taste in music,” Rudy explained. “We all liked the same bands. We were all influenced by the same bands. And that’s a little bit different. That’s what really creates a cohesive collective sound, style and philosophy for the band that I like to call a consciousness.”

As for what he hopes the people who come? SILENT RELget the upcoming shows from them, Rudy said: “That’s an interesting perception. Because to me, what they get is not what I can give. Because they’re not going to get anything unless we give as a band, we’re presenting something to them. And my mission, when I get on stage go, or even if we have such a conversation is to celebrate the memory of Frankie Banalic† Kevin DuBrow and Randy Rhodes† And to explore the musical legacy of . to celebrate SILENT REL, what we have been able to achieve and touch people’s lives with our music and how they have touched us. You know, it’s all collective. You can’t have the success SILENT REL has experienced without a loving audience. We love the audience, the audience loves us too, which for me is the ultimate experience of being in a band. And you have to really appreciate it and realize what a blessing it is to be able to do this for so many reasons.”

Rudy played his first show back with SILENT REL last November at The Groove Music Hall in Thornburg, Virginia.

Sarzo was one of the members of SILENT REL‘s “Metal Health” queue up. He played bass on the classic LP, which sold over ten million copies and spawned the hits “Come on, feel the noise” and “Metal Health” and on the follow-up report “Condition Critical”†

Rudy appeared in the most notable music videos in the MTV age and toured with the band until 1985 and again from 1997 to 2003. During his years outside the band, Sarzo was a member of OZZY OSBOURNE† WHITE SNAKE† DIO† BLUE YSTER CULT† QUEENSRŸCHE and THE GUESS WHO†

Trivial died in August 2020 after a 16-month battle with pancreatic cancer.

Trivial resurrected SILENT REL in 2010, three years after the death of singer and co-founder Kevin DuBrow†