Twenty One Pilots bring their hyper-kinetic, hyper-visual arena show to the relative intimacy of Shepherd’s Bush Empire. But while the production may be downscaled, the performances are not.

Twenty One Pilots have no shortage of ideas.

Let’s start with their current Takeover tour which has taken over London this week. Instead of dealing one blow in, for example, the O2 Arena, the duo is building up to the Wembley Arena by playing increasingly larger halls in the city. Yesterday it was Camden Assembly (which hosts 400 punters), tonight Shepherd’s Bush Empire (2,000), before graduating from Brixton Academy (5,000) and, finally, the 12,500 capacity arena next to Wembley Stadium. It’s a good marketing idea that keeps the Twenty One Pilots name going for more than one night. More importantly, it allows the band to reconnect with diehard fans — someone who told our photographer he’s been queuing outside the venue since Monday morning — even though it couldn’t have been easy to scale down this hyper-kinetic, hyper-visual show.

A quick succession of inspired concepts, it reveals one costume change, dramatic light shift and performance surprise after another. Near the end of the opening salvo Good Day and No Chances, smoke plumes from singer Tyler Joseph’s black and bejeweled ski mask. As Message Man climaxes, he bathes his hands in black paint to transform into the Blurryface character. During the campfire medley portion, where Joseph, drummer Josh Dun, and their backing musicians “get cozy” at the base of the stage, they usually lit a real campfire onstage. Health and safety put the kibosh on that tonight, but we still get to see: CO2 jets working overtime; Dun’s signature backflip; two men in overalls and gas masks spraying smoke like Derek Zoolander and his friends spray gas at the gas station; Dun plays his kit while being held by the audience; and both members are effectively crowdsurfing while hitting snare drums during Trees’ confetti-strewn finale. 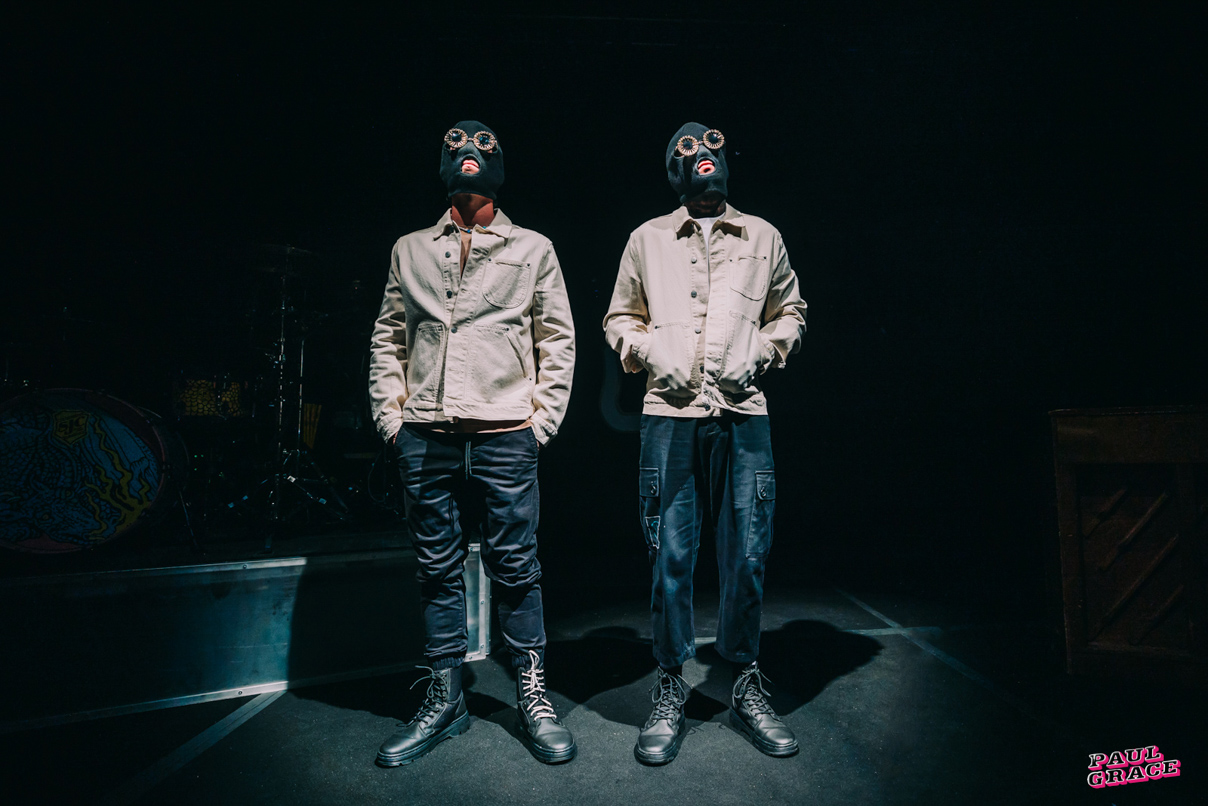 The ideas also keep coming musically. Twenty One Pilots’ music is full of it, with hip hop, indie rock, R&B, emo, rap, soul, folk, EDM, ska and even Elton John (sometimes all in the same song). The duo doesn’t even hide their most surprising influences: there’s a glitzy go at Bennie And The Jets, with multi-instrumentalist Joseph at his piano, flamboyant sunglasses good for; the campfire medley features I Can See Clear Now and My Girl (plus Careless Whisper’s sax break).

But the band’s originals get the most cheers from the relentlessly cheering crowd. They know the lyrics — including the intricate, Eminem-speed styles of Car Radio and Lane Boy — so well that Joseph was able to get through the entire show without singing a word. It is astonishing. But this isn’t a mass-okay, this is an ambitious, energetic arena show. The production may be downsized tonight, the performances are not. 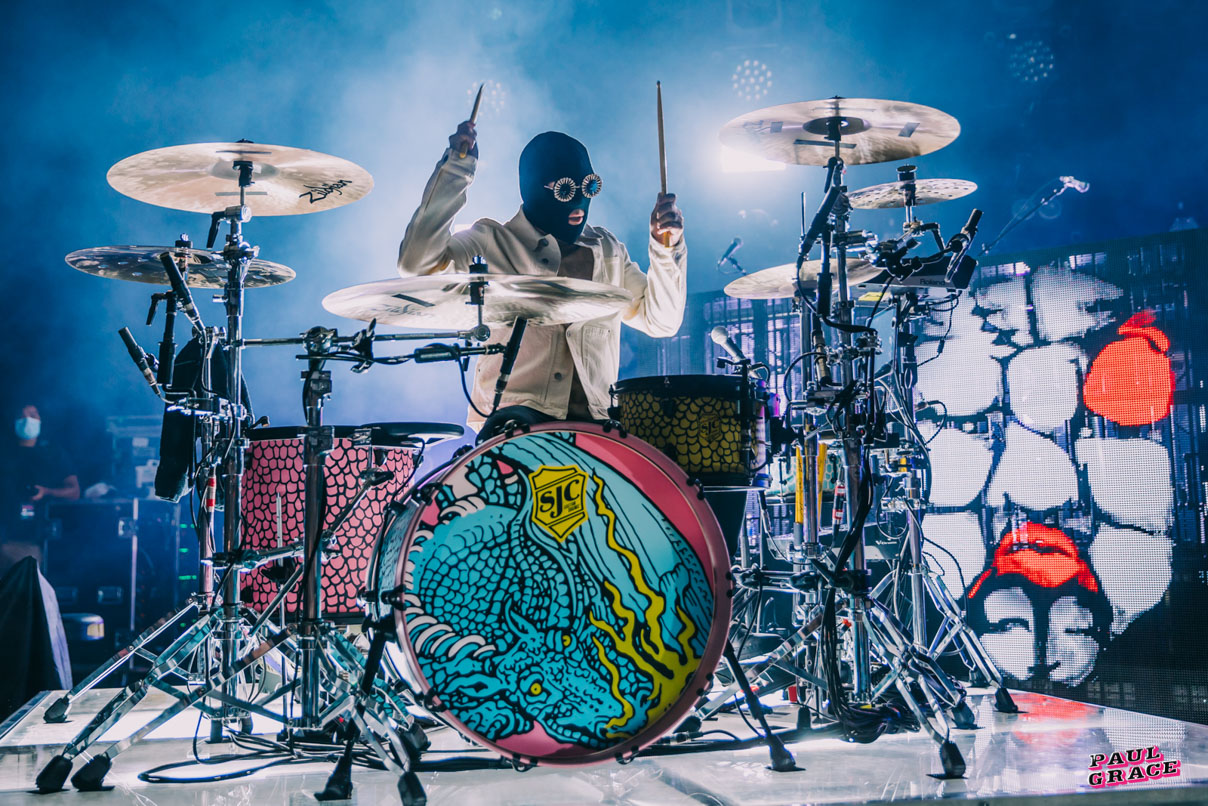 Joseph – who changes costumes as often as he changes instruments (keys, guitar, bass) – just as easily sing House Of Gold as he raps Ride, or roar his way through Shy Away, jumping up platforms, jumping off the video wall, or stepping on the constantly bouncing crowd. Dun, though less mobile, is no less energetic than the singer (or the audience), working up a sweat to pass part of the show shirtless. And the touring musicians – including (somewhat surprisingly) a trumpeter – seem to be having as much fun as the fans, especially during the one-two punch of the unstoppable funk-fest Heavydirtysoul and just plain summer Saturday.

Twenty One Pilots’ performances in Brixton and Wembley will no doubt add to the spectacle, but it’s hard to imagine that they can match the relentless, unbridled energy that’s piling up in Shepherd’s Bush Empire tonight.

Words by Nils van der Linden. You can visit his author profile for Louder Than War here. He tweets like @nilsvdlinden and his website is www.nilsvanderlinden.com. He hosts the weekly Mood Swings show on Louder Than War Radio, live here every Wednesday from 8-9pm and available on Mixcloud thereafter.

All photos © Paul Grace. For more of Paul’s writings and photos, visit his archive. Paul is on Facebook, TwitterInstagram and its websites are www.paulgrace-eventphotos.co.uk & www.pgrace.co.uk.