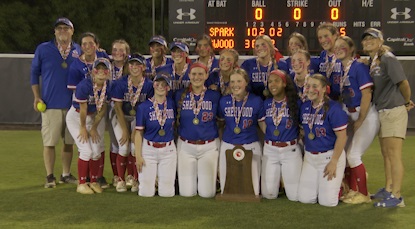 COLLEGE PARK, Md (WDVM) — On Saturday-evening, the Sherwood softball team faced Severna Park in the MPSSAA 4A State Championship. The Warriors dominate the game, winning 21-5 in five innings to claim the title.

“It’s everything they’ve worked for since the start of the season,” said head coach Ashley Barber. “We had to work together, we had to be together to be at our best, and that’s exactly what they did.”

The game started at 10 p.m. due to the state games before it got too late. Sherwood wasn’t crowned champion until after midnight, because the lights went out in College Park.

After giving up the first run of the game in the top of the first inning, Sherwood reacted by scoring 13 runs in the bottom of the inning. They followed that up with six runs in the 2nd and jumped out to a 19-1 lead after two innings.

In the 4th inning, the Warriors added two more runs to break 20. In the top of the fifth, Severna Park answered with two runs of its own, but it was only a matter of time before Sherwood would mercifully end the game. †

“It feels fantastic,” senior Holly Rogers said. “I am so proud of this team and how far we have come. We really bonded and became so close. If we didn’t bond and become so close, it wouldn’t have happened the way it did. I am happy that this is the result.”