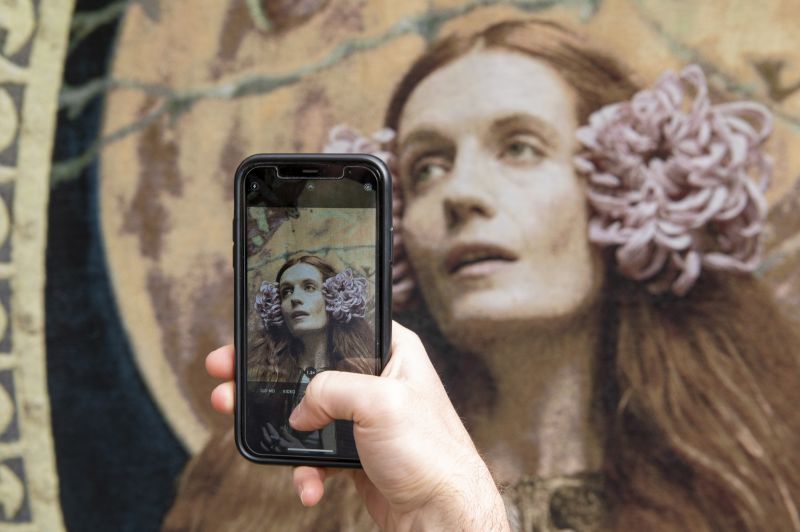 The three individual 2×2 meter woven tapestries have hung in the picturesque gardens of Dulwich Picture Gallery, where Florence performed in 2017. And they reflect the lyrical inspiration Florence found in Pre-Raphaelite art when writing Dance Fever, the band’s first album in four years, during the London lockdown.

The songs on the album reflect the aspects of life that Florence missed most during the lockdown, from clubs to dancing at festivals and the expression of creativity through art and movement.

“Pre-Raphaelite art has been a musical and artistic inspiration for years, most recently brought to life through the lyrics and creative album in Dance Fever,” Florence said at the opening ceremony. “To be taken back to my favorite era and reinvented in the style of the leading women who inspired Rossetti and Hunt is a dream I could never have imagined, on top of being hung in one of my most beloved galleries in my hometown, South London.”

Jennifer Scott, Director of Dulwich Picture Gallery, added: “The Dance Fever Tapestries featuring Florence are a perfect complement to our latest exhibition Reframed: The Woman in the Window, which traces the recurring motif of ‘the woman in the window’ throughout history. explores more than 50 works by Rembrandt van Rijn, Dante Gabriel Rossetti, Louise Bourgeois, Kudzanai-Violet Hwami and Rachel Whiteread, among others.

“Florence itself is a modern representation of Pre-Raphaelite muses such as Ophelia by Sir John Everett Millais. Five years after her exclusive concert here in 2017, we are delighted to have the tapestries hanging in our gardens.”

Spotify has also partnered with Florence to create a special ‘album experience’ on the app, giving fans exclusive content from Florence about her creative process and inspiration. The album can be heard here and Reframed: The Woman in the Window will run until September 4.