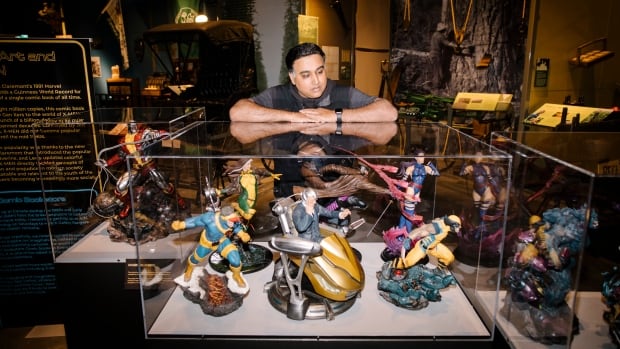 An exhibit at the Museum of Surrey aims to guide visitors through a South Asian man’s vast pop culture collection, giving a perspective of what it was like growing up in the 1980s and 1990s.

The name of the exhibition is a reference to Generation X, which Statistics Canada defines as people born between 1965 and 1976but whose formative experiences were in the 1980s.

It rightly includes collectibles and memorabilia from the most influential pop culture properties of the time – Star Wars† Transformers† Alien, and more.

“Before Generation X, there are many of us who were tackling technological advancements with computers at the time,” Mann told CBC News. “Future careers were a little unknown to many of us… but here in the Lower Mainland we are now known as the entertainment center†

“Much of that foundation comes from [those] experiences from the late ’80s and early ’90s, and these iconic figures who help those people move into those careers.”

The exhibition features some of Mann’s most treasured collectibles, with captions describing their connection to Surrey and Mann’s life in the city.

“These are all my personal collections,” he said. “They’re not for sale or anything like that. These are things I’ll essentially keep forever, or pass on to my kids.”

Inspiration X was launched last week at the museum in the Cloverdale area of ​​Surrey and will run until 25 September.

It is part of the museum community treasures initiativewhere Surrey residents display their own artifacts and tell their stories.

One of the most prominent figures on display is Yoda and Luke Skywalker from The Empire Strikes Back† Mann says he watched the film at Surrey’s Guildford Mall, which he described as a “watering hole” where the community would congregate.

In addition to memorabilia from western media franchises, Mann has also showcased an anime figurine – the character Kenshiro, from Fist of the North Star†

He says Japanese and Asian media came to Surrey and the Lower Mainland when immigration increased in the 1980s — and he and his friends were able to explore the new generation of media thanks to the rapid transit.

†[In the] The SkyTrain was introduced in Surrey in the early 1990s. That opened up for us all kinds of accessibility that we normally wouldn’t have,” he said. “We had access to cultural groups, cultural centers.

“A lot of those [Asian] influences came over, especially with anime stores or anime content and stores.”

In an era before the Internet made pop culture discussion accessible, Mann said the SkyTrain made it easier to connect with other cultures.

“Today’s kids, I’m not sure how much they are really affected by a lack of inclusion or a lack of diversity,” he said. “They may not understand that discrimination in the ’80s and early ’90s was a little different.”

Mann says his father was bullied for being South Asian, and the family once covered their car with toilet paper because they looked different.

“If you read through the story of the exhibition, it tells a little bit about how we’ve developed inclusion,” he said. “Especially in the common interest of these movies and franchises, especially if you go to a movie theater.

“Not everyone thought about your skin color or where you came from. Everyone was there collectively.”

Go behind the scenes at the exhibition’s personal collection of statues and figurines of a Surrey resident from Star Wars, Transformers and other cultural touchpoints from the late ’80s and early ’90s.