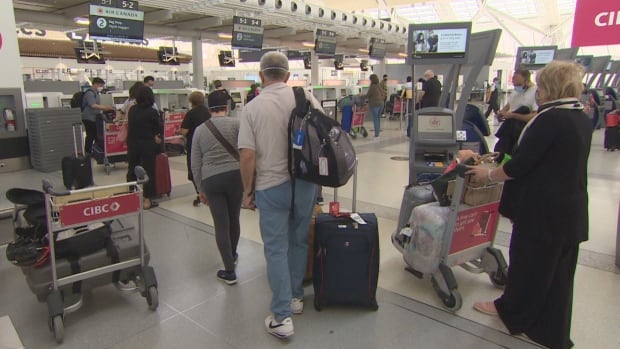 “It’s important that tourists have the best experience possible,” Crombie said. “It’s so important that we put our best foot forward, especially here in Pearson, the first place many tourists arrive in our city.”

The federal government needs to take steps to address the problem, she said.

“Mississauga’s tourism industry, and really the county’s entire tourism industry, relies on Pearson’s ability to operate efficiently. That means passengers should get the best possible experience from the moment they walk through those doors.”

Crombie said the Canadian and US governments understand that wait times are an issue. She said Mississauga is willing to help those governments find solutions, including eliminating duplication in screening, security and customs processes and making investments to recruit and hire more staff.

Federal Transport Minister Omar Alghabra and Public Security Minister Marco Mendicino released a statement Friday saying their government is taking action to end delays at Canadian airports, including by “working with its contractors to increase the number of screening officers at passenger screening checkpoints.

“Currently there are about 400 additional screening officers at various stages of their training across the country who will be deployed between now and the end of June,” the statement said.

Federal ministers also say they are enforcing “adequate security checks” and “working with airports, airlines and other airport partners to find solutions to reduce delays at airports ahead of the summer peak season.”

‘Travel should be a seamless experience’

Victoria Clarke, CEO of Tourism Mississauga, said Pearson is the gateway for international travelers onward to other Canadian destinations. She said the longer processing times are due to two remaining pandemic emergency policies: random COVID-19 testing for international passengers on arrival and double health checks.

“The recent travel experience will have adverse and lasting effects on how our region is perceived on the international stage and negatively impact new international investment for the Toronto area,” said Clarke.

“Travel is meant to be a seamless experience,” she added.

“During the height of the pandemic, our industry understood that we had to make sacrifices for the good of the country, but now that these times are behind us, these obstacles have become impossible to justify.”

Before the pandemic, processing took an average of 30 seconds for arriving passengers, but now that wait could be four times longer, she said.

Trevor McPherson, CEO of the Mississauga Board of Trade, said the delays at Pearson are already having an economic impact. If the federal government doesn’t act quickly, the situation could get much worse, he said. Economic success depends on Pearson’s success, he said.

“After years of challenges to our local travel economy and the loss of 94,000 jobs in Mississauga’s tourism-related industries during the pandemic, our businesses and visitors rely on a smooth and efficient airport process to access what our region has to offer,” said he. †

Doug Allingham, chairman of the board of the Greater Toronto Airports Authority, which runs Pearson Airport, said thousands of travelers had to wait more than 90 minutes, often on board planes, before entering the customs hall. †

Allingham said nearly half of all international passengers arriving in Pearson last week were delayed in some way.